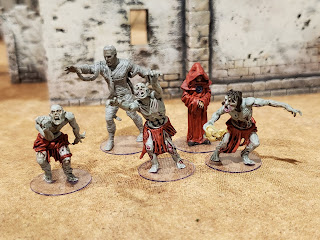 No, not the Batman villain. I actually got poison ivy last week - and to make matters worse I actually got it around my left eye and it swelled up something fierce! Living on the farm getting poison ivy is nothing new for me, I'm good to get it several times a year and as annoying as it is I can usually power through it without seeking medical attention, but this time, not so much. It took me out of commission for quite a while and obviously made it difficult to get anything done this week for Zomtober, but I did manage to sneak a few completed models in at the last minute. 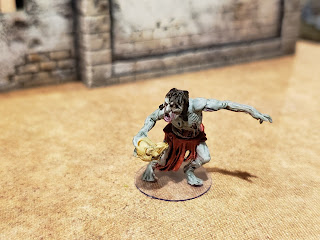 Anyone who has followed the blog for a while knows that I'm not a big fan of multipart plastic models - especially the WWII ones where trying to glue weapons into hands and arms is enough to make me bang my head against the nearest wall. But the Mantic zombie models for Kings of War are really nice and have some really incredible poses - much more aggressive than any of the undead you'll find in Mantic's The Walking Dead game so that's what I decided to give a go for this week. 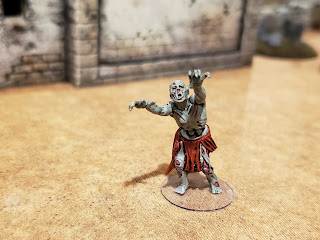 The one thing I think I finally figured out is an undead skin tone. I have struggled with this from the very first time I tried to paint undead and have been trying all kinds of different recipes over the years with varying degrees of success, but I think I finally have a winner. The models are primed with the new Games Workshop Grey Seer, then I used Vallejo's Pale Grey Blue to paint all the skin. 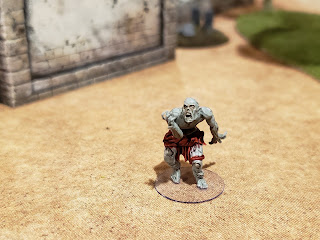 I then washed the skin with Army Painters Green Tone Quickshade wash and that made all the difference in my eye (the one that was working at least lol!). I decided to not go all blood and gore on these models as I feel less is more with these types of undead figures. 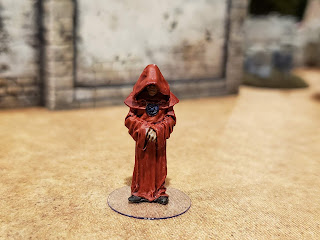 I did a couple of other figures really quickly using some contrast paints since I only had a few models completed. First was this monk from Effin Cool Minis through their last Kickstarter. 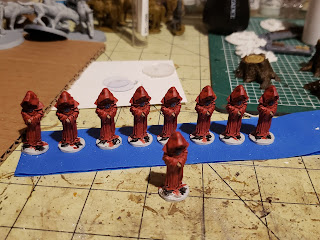 I have 9 more completed but still need to get them based. The red contrast paint made them paint up really easily. I also have some really fun terrain pieces to go with the set that I hope to get completed in the near future. 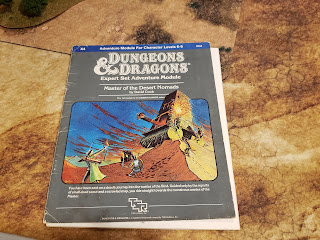 When I first saw these monk figures it reminded me of what was my piece de resistance of my teenage Dungeons and Dragons years and the adventure 'Master of the Desert Nomads'. The last part of the adventure took place in this monastery high up in the mountains where this group of monks offer help, food, and shelter to the party but when night time comes they change into their true forms - sort of like vampire/undead creatures, making the adventuring party their targets. It made for an absolutely incredible gaming experience and was just the perfect ending to what was already an incredible adventure. 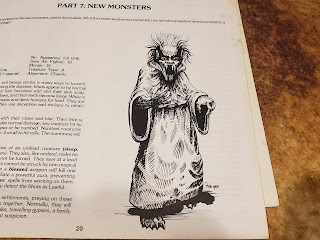 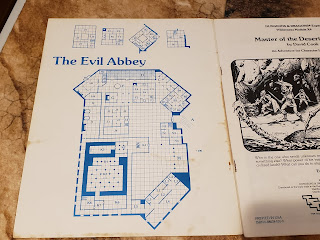 Something I would really love to try to do is to run that adventure again. I've subtlety been dropping hints to my son to see if there is any interest from him about playing, and now that I belong to an actual gaming club, who knows, maybe that could be a possibility. But ultimately I'd love to use my much improved terrain building skills and all the models I have to just build the monastery in 28mm. It is something that I've thought about for a long time now, and something that could be pretty impressive visually I think - and could even be used for other types of games, pulp or spy-fi for instance. We shall see :) 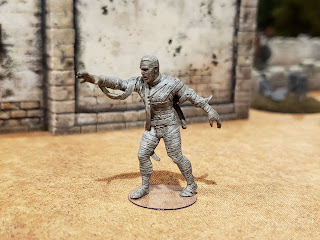 And finally just for fun, and since it's October, I painted up the Mummy from Crooked Dice's Pulp Kickstarter. This is a fantastic model and with the contrast paint took no time at all to complete.

Until next time, when hopefully both my eyes will be fully functioning, thanks for looking!
Ivor
Posted by Ivor Evans at 7:21 PM