2017 The Year Of The Kickstarter 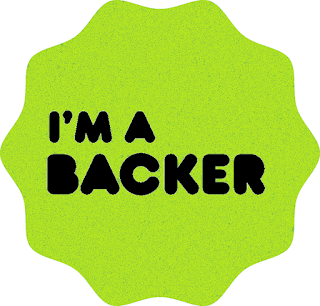 In an effort to spend more money and get lots of stuff I surely won't build or paint in a timely manner, this year I backed 11 Kickstarter projects and 10 were successful. To date, two have completed their pledges. 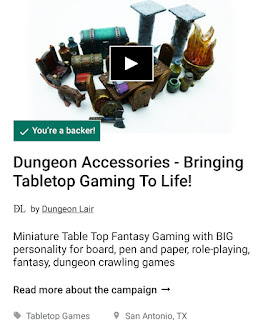 The first one I did this year was from Dungeon Lair. Lots of neat little scatter pieces and detail items that really enhance a table. Even though I don't have a dungeon crawl game per se, all these items I thought would fit perfectly into the manor complex buildings, especially with the tables, desks, bookcases and the really neat fireplaces. 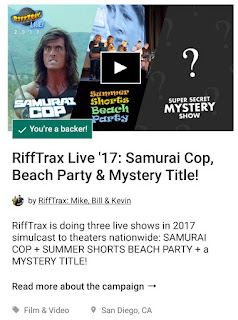 Not gaming related but I can't pass on an opportunity to help get more of the funny out from the guys at Rifftrax (formerly of Mystery Science Theater fame). And this year they absolutely knocked it out of the park with their riff of "Samurai Cop"! Over the course of 90 minutes I don't think I ever laughed so hard in my whole life! This was also one of the two KS I mentioned earlier to deliver on all pledges so far. 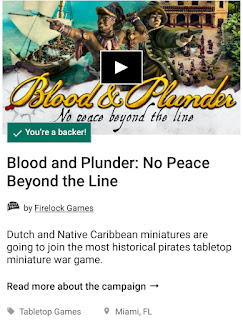 I went full on into stupid mode on the second Blood and Plunder KS, spending the most money out of all of this years backings. And that was solely based on everything I saw at Historicon and meeting and talking with all the Firelock guys. The ships are really what did it - seeing them all painted up, the rigging, the cannons, and all the figures on the decks... wow!

This was me back at the hotel that night figuring out all the new add-ons and how much my initial two player pledge was going to increase :) It came close to tripling my initial pledge. 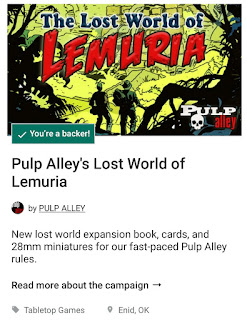 It was really great to see Dave Phipps put up his first KS with the latest addition to the Pulp Alley expansions with the Lost World of Lemuria. And he did an absolutely amazing job with it! This is slowly turning into one of my favorite game systems. All pledges for this KS were fulfilled to 100% within a few months of it ending - a big hats off to Dave! 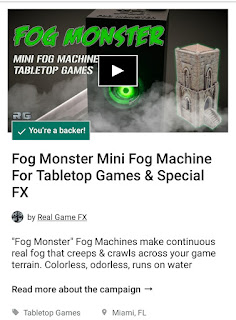 I stumbled across this KS and thought what a cool idea to add some atmosphere to a game - specifically to the yet to be built secret Hydra facility where Agent Carter will heroically thwart the evil plans of Red Skull. Who knows, maybe even just having fog crawl across the table of a game of Bolt Action would be neat as well. 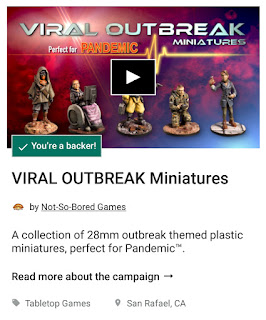 Of all the KS I backed this year this is the one that's not doing a lot for me now that it's in production. Hopefully that'll change once I actually have them in hand. What made me jump aboard was modern civilians. There were some neat scientists that I thought could be useful pulp-wise, and it wasn't an expensive KS, so I thought why not. But this one is definitely on the bottom of the list in terms of excitement. 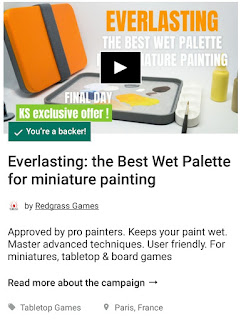 I'm a pretty awful painter. I've heard about wet palette's for a while now and supposedly they help the noob with their brushwork. It just looked like a really neat tool and I liked the whole package it was presented in. So fingers crossed it ends up helping. 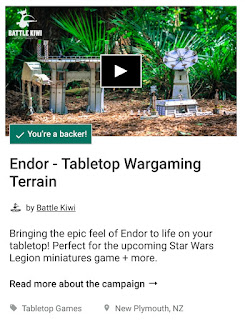 With Star Wars Legion right on the horizon, and the inevitability of me going full on stupid mode buying all in on it, I backed a really neat Endor mdf terrain KS from Battle Kiwi. Don't tell 4Ground because I feel like I'm cheating on them with the new hot girl lol! I'm sure the guys at 4Ground will have a whole line of Legion themed terrain - though they really need to get going on it quickly - but this was a pretty good deal value-wise, despite shipping from Australia, so I figured what the heck. 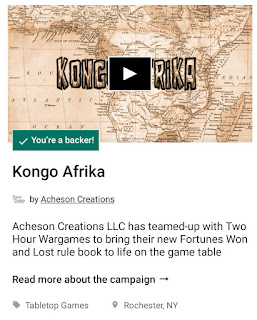 I'd been wanting some lost continent themed terrain, specifically huts, for some time now as I felt it would be perfect for pulp gaming. This KS had a bit of everything I wanted; huts, tons of animals, canoes, really neat scatter terrain pieces, and a super cool replica of Humphrey Bogart and his boat from The African Queen. Really looking forward to this one! Bummed that I couldn't get the captured explorers in the cooking pot as an unlock goal though :( 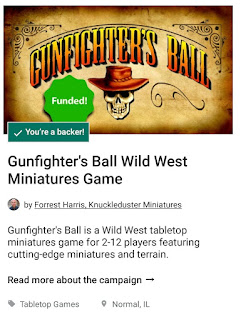 And the last one of the year was from Forrest Harris at Knuckleduster. My first dice rolls in skirmish gaming were in the Old West with GEG's Dead Man's Hand and I absolutely loved it. The Old West is a theme I really love and can easily jump back into when the mood strikes and with Forrest's excellent figures that is surely to happen soon. I think his figures are hands down the best for that era. This KS has a new set of rules which I'm really interested in seeing and the amount of free unlock goal items being given away made this an absolute no brainer. 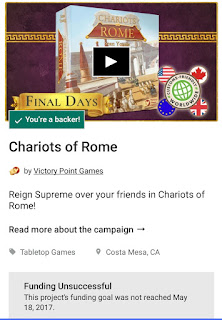 The Chariots of Rome was the only KS I backed that didn't get funded. This is a board game in the vein of Circus Maximus without all the complicated rules. I thought it would be fun to try to take these rules and build an actual table with miniatures and why I jumped in on it. As I mentioned they were about 3k short of the KS goal but Victory Point Games still is producing the game and I pledged outside of KS. They just announced that the games are arriving from overseas so really looking forward to seeing this.

All I can say is thank goodness I don't have a 3D printer because the amount of Kickstarter's that sell files for miniature terrain is staggering, so for now I will be sticking with the old fashioned miniature gaming KS's :)

As always, thanks for looking and happy holidays to everyone!
Ivor
Posted by Ivor Evans at 10:40 AM