I had inadvertently strayed away from working on my last two 4Ground buildings - The Sassy Gal and another Undertaker (which I haven't decided 100% on what I want it to be) - for Fords Canyon and actually did a little painting this week. I have some bank robbers I got at Historicon last year that are waiting for their bases to dry which I'll probably show here in a few days, but while I was working on them I actually finished up the last of my ACW Confederate generals from Old Glory that have been sitting on the desk for what seems like ages. So I thought I'd share some photos!

I kind of have a love/hate relationship with Old Glory at this point.  I think that it is because I now know that there are an absolute ton of quality ACW manufactures out there, though I will say that their "personalities" series of figures are top notch in my opinion. When I first bought into the Old Glory figures - almost four years ago now - I was completely new to miniature gaming save for Flames Of War. Which I mostly got sucked into by watching The Terrain Guys incredible videos on You Tube and the cool tanks and vehicles that the game has. If you've never seen any of his videos, even if you're not a WWII or FOW person, I highly recommend looking them up. Absolutely amazing stuff!

Sure I had plenty of 1/72 scale plastic figures laying about that we used for spy genre RPG's back in the day, but metal 25/28mm figures were completely new to me. I am absolutely fascinated by the American Civil War and was always drawn to the Confederate side (especially the calvary) - certainly not because of political reasons, but I think more because I just love the underdog.  It was after I found a copy of Richard Borg's excellent Battle Cry in a second hand store that I thought "How can I make this on a bigger scale with way more figures?" that the search for metal figures began. I knew I didn't want to do 15mm, even though I know you can create bigger battles in smaller spaces and ultimately it would even be lower in cost. But because I had painted some of the FOW figures and honestly I really hated it. So bigger scale it was.
﻿


I got super lucky and found a really nice seller on Ebay getting rid of a collection of Old Glory ACW figures for a friend of his who unfortunately was going into assisted living. He had a lot more that he was going to try to put up on Ebay, but he offered me a deal to buy everything he had. It was too good a deal to pass up - and so began what I now affectionately call "The Mountain Of Lead"!
﻿

﻿﻿﻿﻿
Again, I don't want to knock Old Glory too much because for the money, you do get a lot with their membership card. I bought into it to fill holes from the Ebay purchase. Their customer service is fantastic and I always stop in and say "hello" at Historicon. But when I look at the horses for the pictures I posted here, for example, they are a little rough. Especially when you place them next to a Perry horse. There are some other things that bother me a bit, but again, this isn't a knock Old Glory post, and big picture, I'm happy overall with what I have and what I got for the money. And If I ever get it all painted, "Grand Army" - both North and South - wouldn't even begin to describe it!

﻿﻿As always, thanks for looking!

I have been really struggling recently with trying to make my 4Ground buildings different from what is given out of the box (or bag as it were!). My default solutions lately have been to simply add a shed or some sort of side building and I think this has worked out great with the undertaker I completed a few weeks ago. This time around I wanted to upgrade Zin's Gun Shop and I really wanted to try my best to make it some how like the gun shop from The Good, The Bad, And The Ugly, with a shooting range. 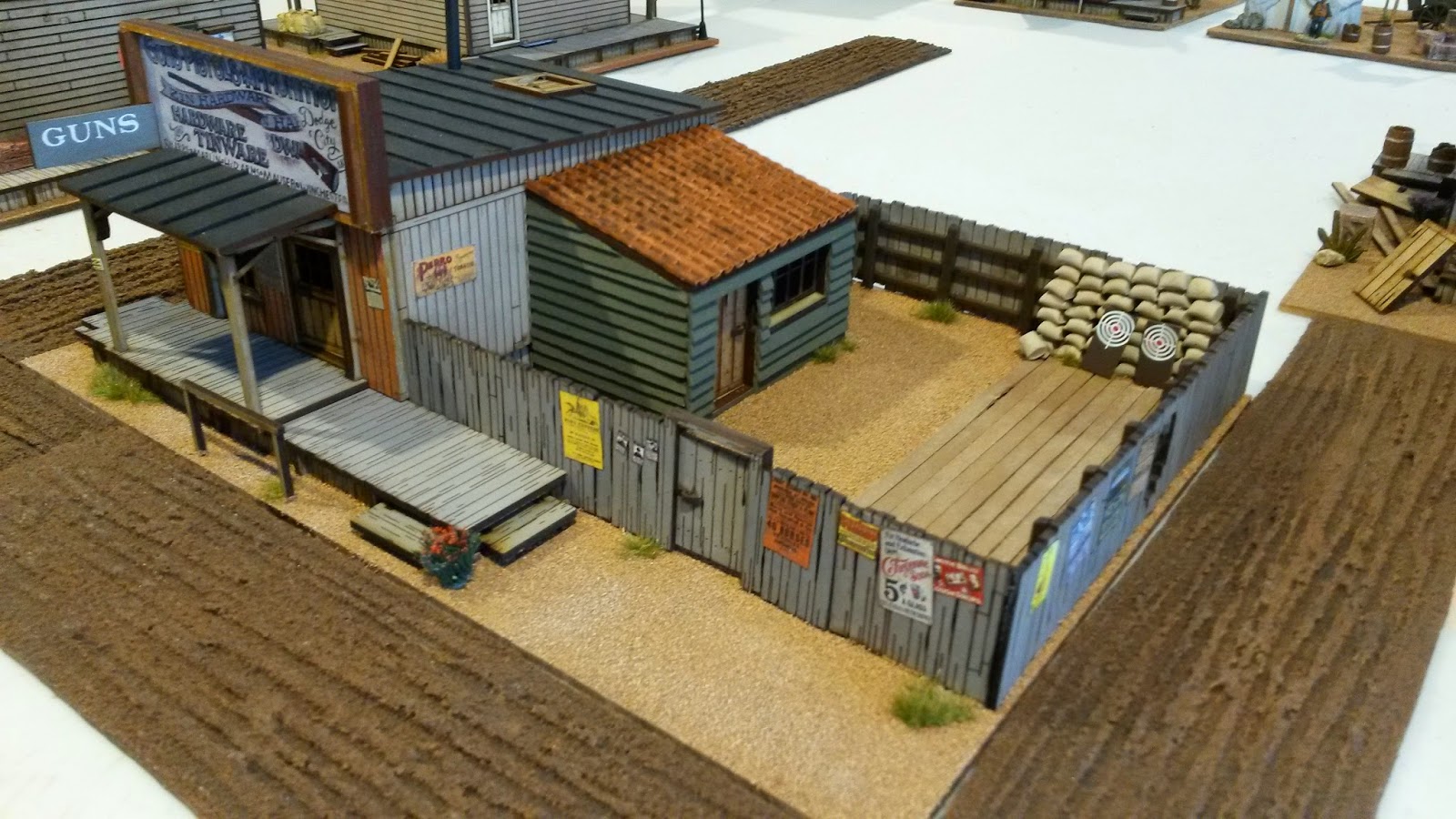 What's nice is that because I essentially made modular bases for all my buildings - only gluing down the sub base and boardwalks - I could take the gun shop off the base it was on and put it on this new, much larger base. This one is almost twice as big as the original. I had more 4Ground fencing that I was able to use around the side yard. I painted the posts and cross beams on the fence, something very easy to do which really improves the overall look. More posters and signs were placed all around the outside of the fences as well. 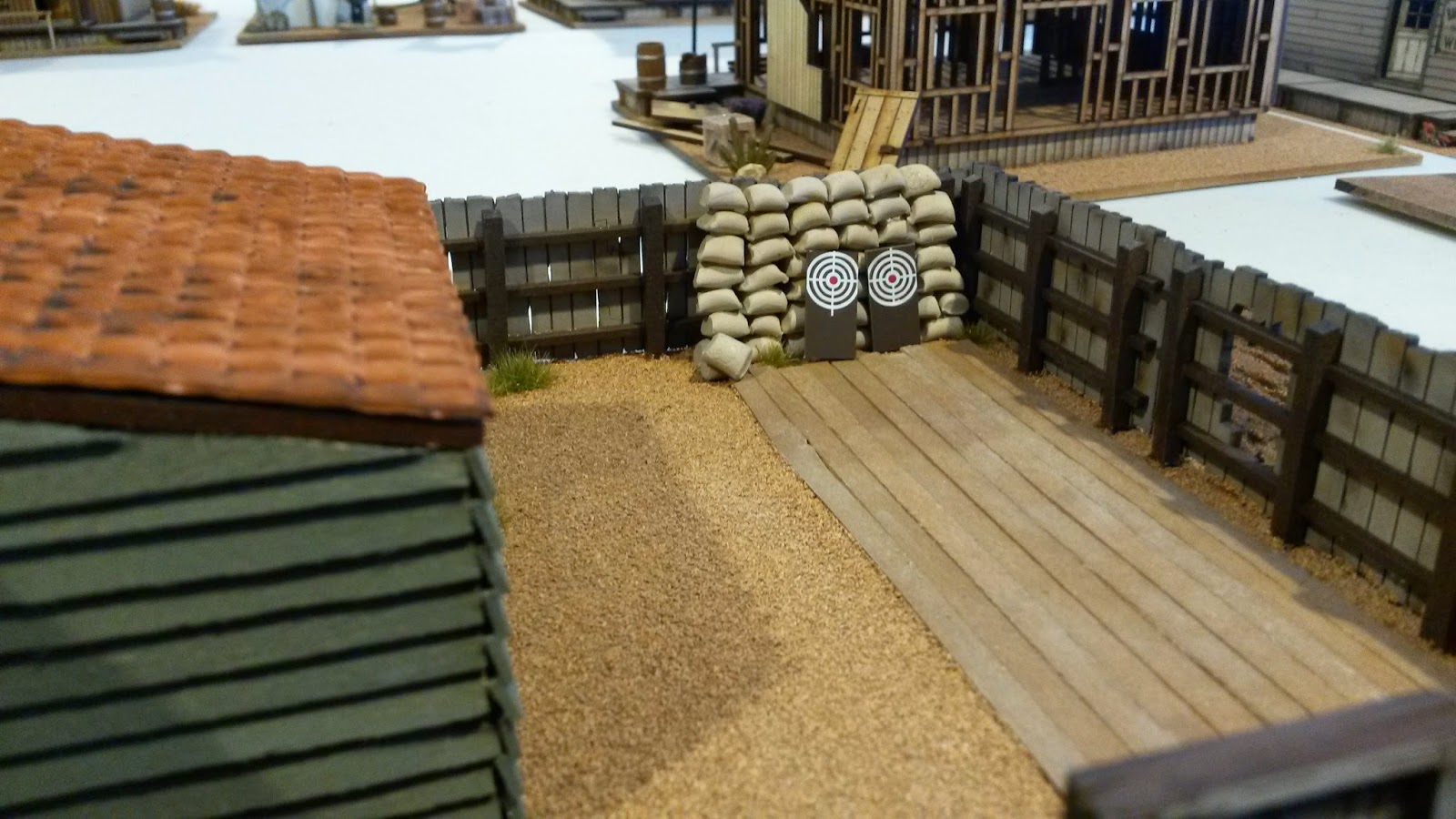 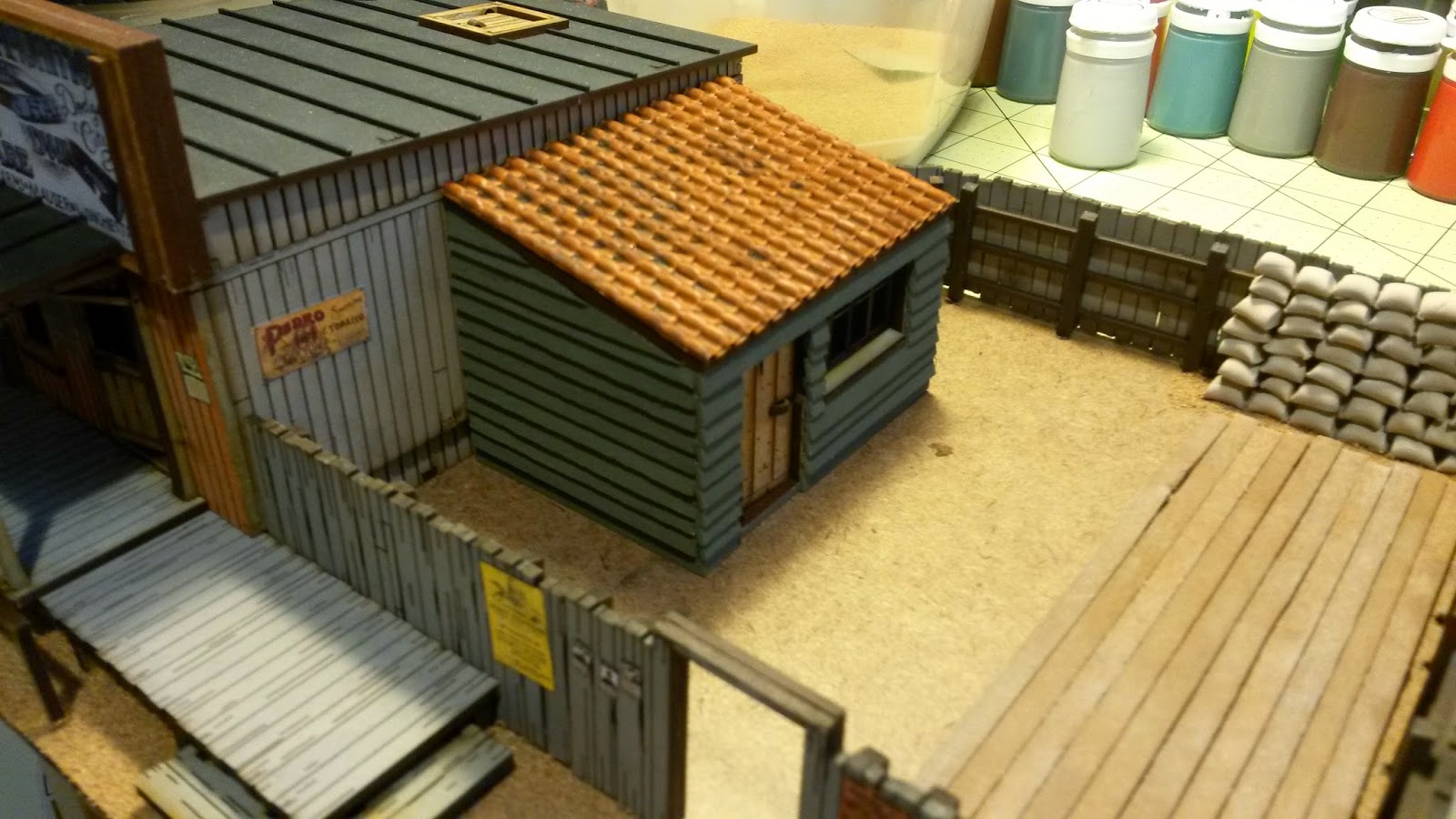 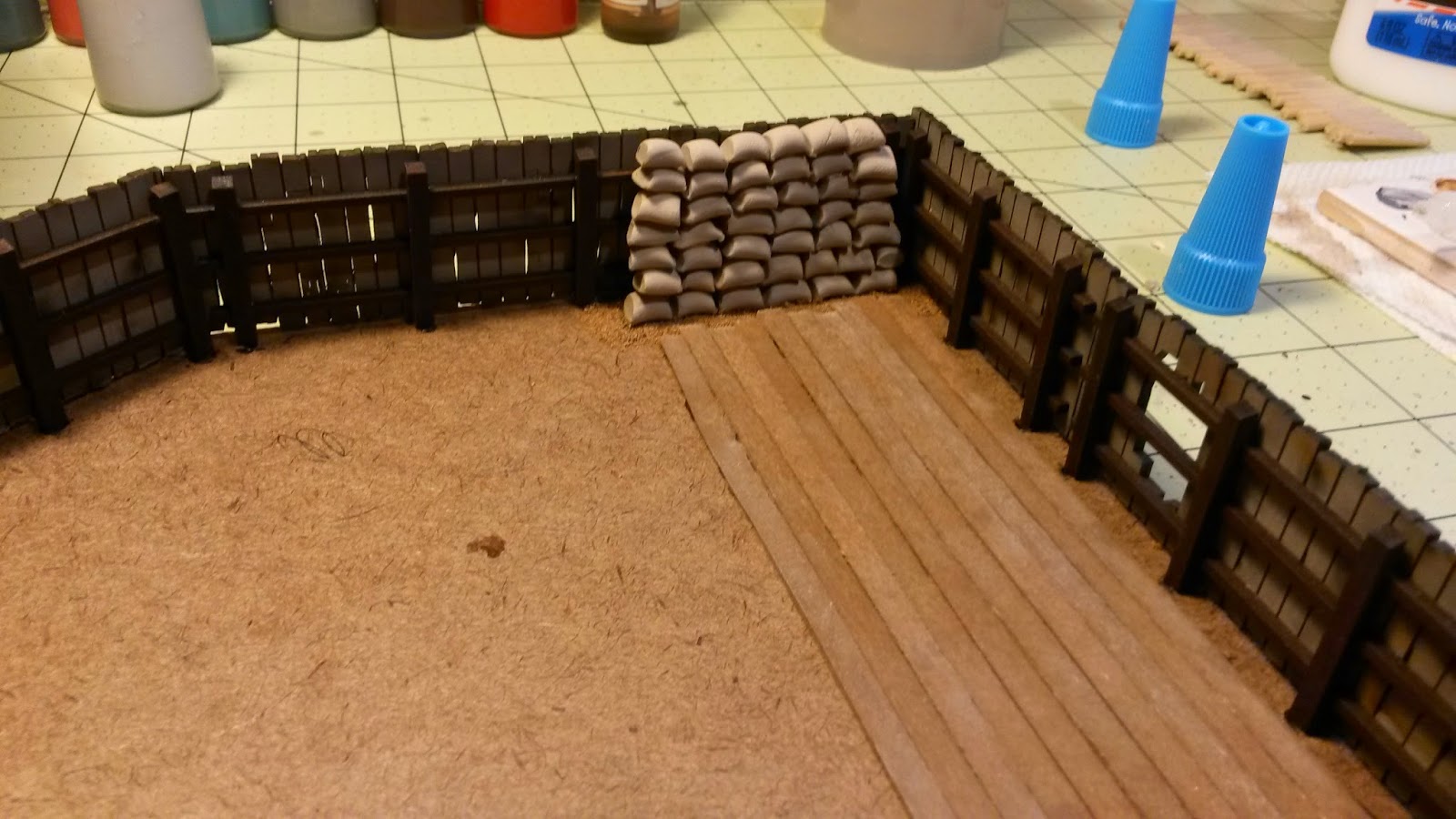 This was my first attempt ever using a sculpting putty - I used Super Sculpy - in making the sand bags for behind the targets. I'd seen a video on it sometime ago and it looked pretty easy, so I figured I'd give it a go. Roll the putty into a worm, like you used to do with Play-Doh, and just cut little rectangles out. You have to bake the Super Sculpy, so I'm glad my wife was away and I didn't have to explain what essentially looked like toddler teeth on a baking sheet was doing in the oven. I painted the sand bags gray and just built a little wall, gluing them on each other as I worked my way up.  I have since watched a new video using Milliput and I wish I'd seen that video first! A couple of really simple things I could have done to improve my sandbags from that video would have been to carve out a "seam" along the sides of the bags and use mesh to indent a "weave" look onto the bags. Oh well, next time for sure! Overall though, I think it works for what I was trying to accomplish. I also laid down some wood planking in front of the targets. I always loved that part when Tuco jumps on the planks to make that last target fall! 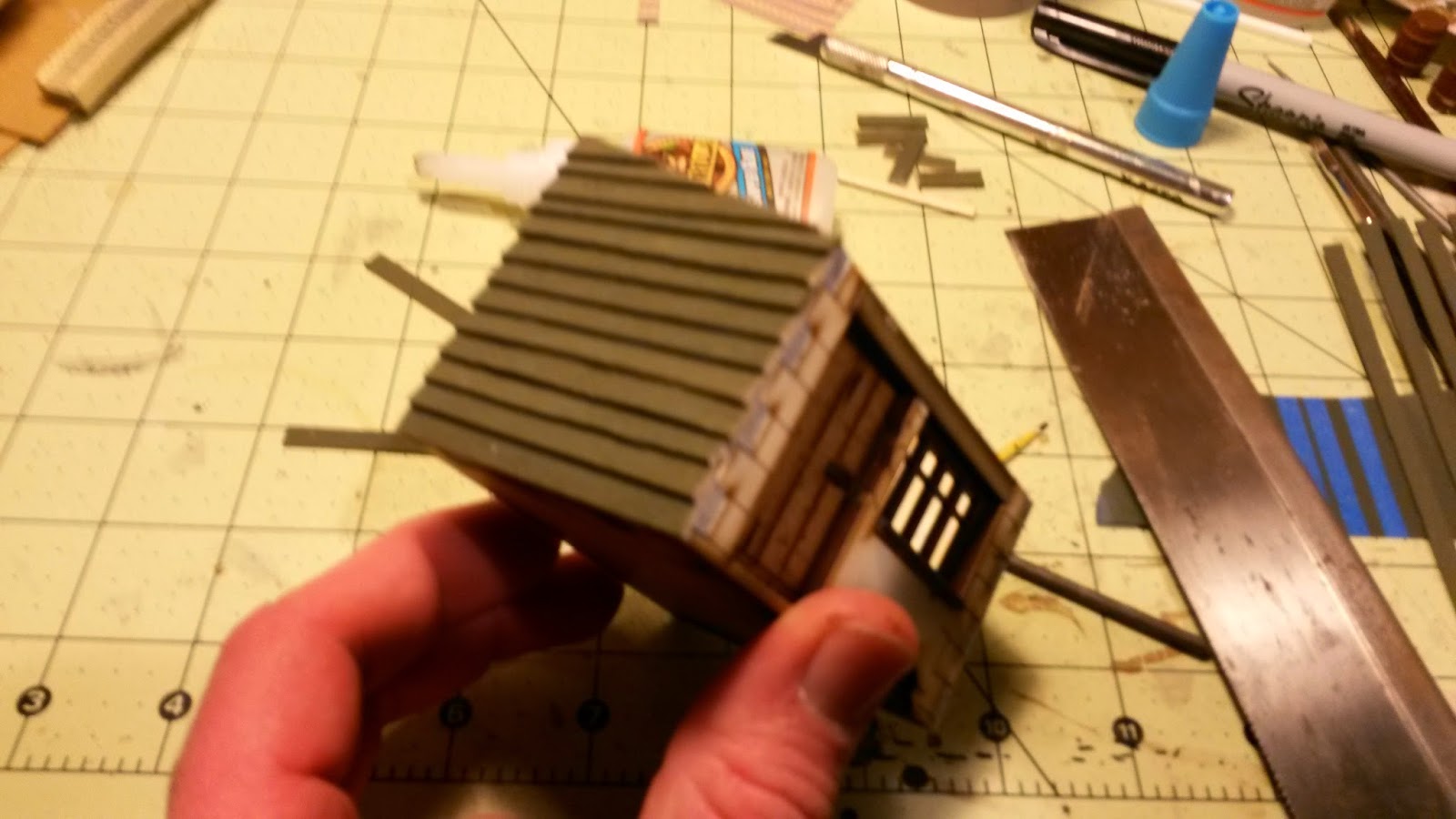 I had a small 4Ground lean to that I already had built, but as it was, it needed to get some wood siding on it to make it more "old westy".  I know I'll attempt something like this again, but I will try my hand with some foam board for the frame of the building - way too expensive to be using 4Ground buildings and just placing wood planking on them! Plus I'd really like it to be much bigger! This too was really simple. First I painted the wood with Plastic Soldier Company British Armour. I used the same technique that was used to build the shed for the Undertakers. Cut the wood to size, start at the bottom and just glue each piece, overlapping a tiny bit, as I worked my way up. Very easy stuff with a good end result. I decided not to go with a wood shingle for the roof, mostly because I felt I had way too many of those already! So I cut to size some of the O scale plastic Spanish Tiles I used on the Sheriff's Office. Three coats of wash was applied to the tiles to get the final look.  Army Painter tufts and a few JTT Scenery flowers were placed throughout. 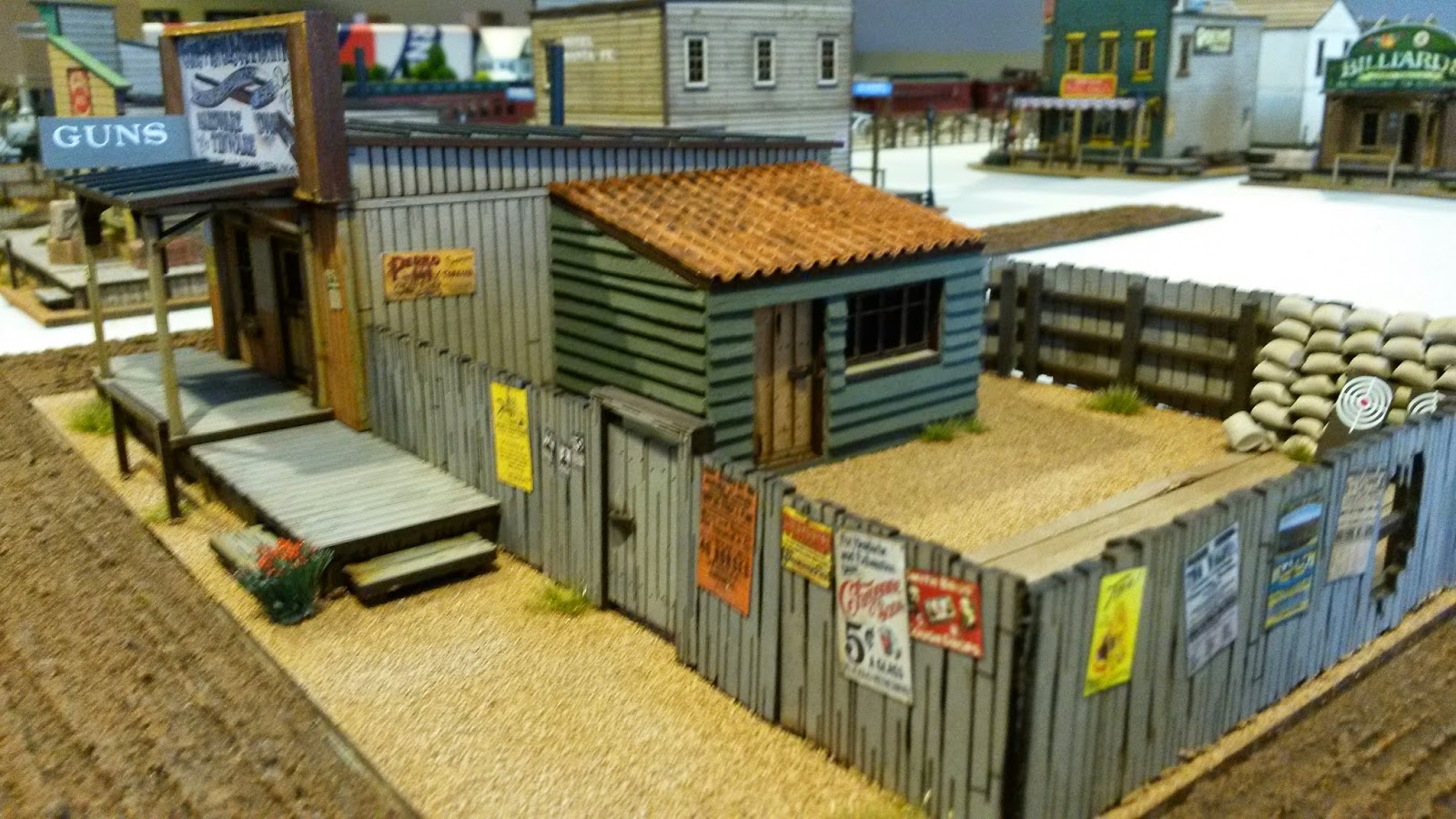 A very simple upgrade that gives the Gun Shop a lot more narrative!