I had two more Kickstarters show up this month from last years crazy number of pledges I made. 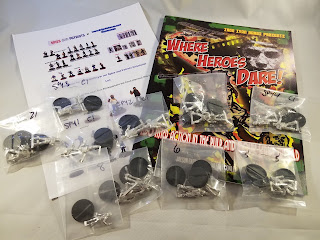 The first was Spies and Patriots 28mm Wargaming Miniatures from Brigade Games, based out of New Jersey here in the states. 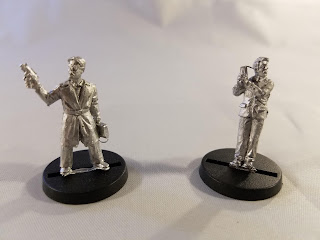 Honestly I'm not sure why I backed this one, especially when I backed at the highest level possible with the most figures. I have more spi-fi miniatures than I know what to do with lol! And now I have 28 more??!! Every backer also got a free copy of the pulp rules "Where Heroes Dare" - in the first photo above. 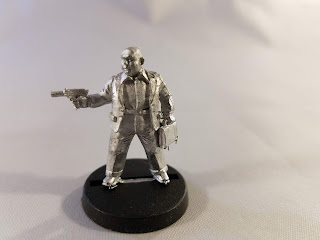 There are a couple neat poses of figures, like the ones above, that should get themselves onto the table sooner than later. Lon and the gang at Brigade Games get an A+ on the fulfillment - the project funded on May 30th and had a July shipping estimate, and I had my box on July 30th. 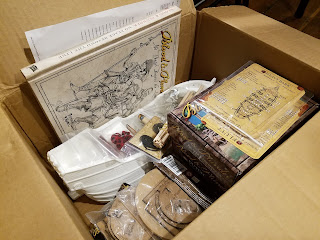 Next to show up was the new expansion to Blood and Plunder by Firelock Games, No Peace Beyond the Line. 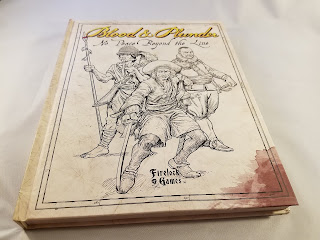 It was at last years Historicon that I went crazy stupid back at the hotel room, doubling my initial pledge amount after seeing some preview items and the game being played in the main exhibition hall. 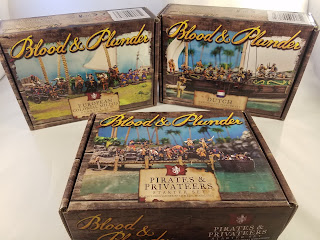 I got three new factions, The Dutch, Pirates and Privateers, and European Colonial Militia. 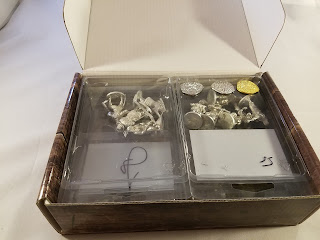 Inside each box contains individual blisters for all the units, along with some doubloons used in the game. 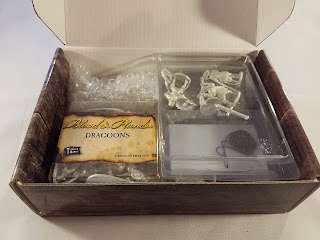 I'm sure when normal retail blisters ship everything will have inserts with descriptions of what each blister is. 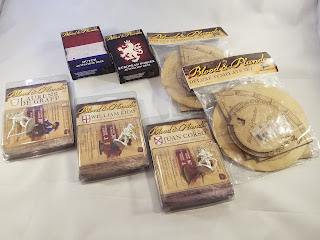 I was hoping that the template package was going to be acrylic but unfortunately it's MDF - not sure if I missed the description on the KS or if it wasn't revealed then. I guess we'll see how it looks when it's put together. 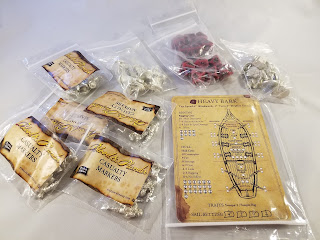 I got a boat load of casualty figures as add-ons, as they are some of my favorite types of miniatures. I'd much rather be able to throw down a casualty figure as opposed to simply tipping a figure over on its side to indicate that it's out of play. One of my bags only has 3 figures in it though - not sure if it's even worth contacting Firelock about since it's just one miniature. 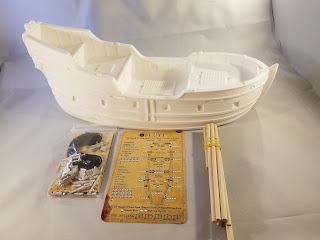 And finally the piece de resistance! The Fluyt! This thing is an absolute monster, and it was seeing the prototype last year that had me all excited and frantically upping my initial pledge. 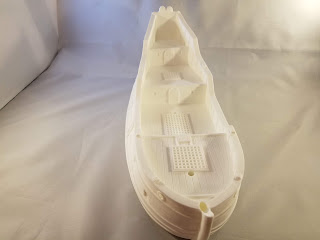 I don't know exactly what kind of resin Firelock uses for their ships but they are absolutely flawless. Resin ships of this size you'd think that there would be all kinds of issues regarding clean-up but there isn't a thing to do except wash it and start the painting process. 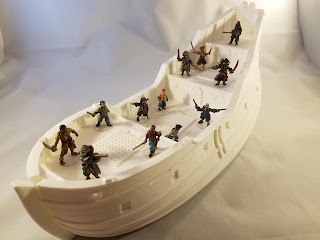 Just to give you a bit of scale I threw some of the newly based pirates on the ship. Once built and painted this thing will definitely something to see. 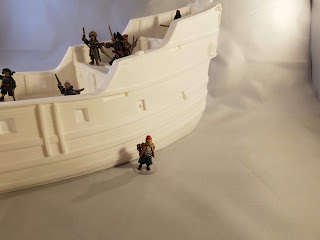 And again, just another scale shot with a figure on the outside. This Kickstarter funded on July 19th 2017, with an estimated delivery of March 2018. So about five months late, not too bad in the world of Kickstarters honestly so I'll give them a grade of a B. 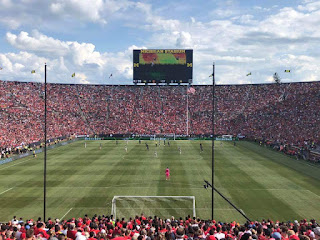 And finally, while I ended up missing Historicon, which was a huge disappointment, I did get to make up a bit of that disappointment by getting to see my beloved Liverpool Football Club during their tour of the US for the International Champions Cup. They absolutely smashed Manchester United 4-1 and did it in front of over 100,000 people at Michigan Stadium. It was just mad. We were right behind the goal in what was deemed the Kop End, so my wife and son finally got to experience seeing Liverpool in person for the first time with Liverpool fans all around them in full voice. She was quite amused by the "Who The F@*k Are Man United" song and was singing along by the third time it was sung, bless her little heart lol!

More Walking Dead survivors on the table currently and also deciding on which building kit to work on next. I can't even remember the last time I actually built an MDF kit and I'm itching to finally start building stuff again.

As always, thanks for looking!
Ivor
Posted by Ivor Evans at 6:12 PM 16 comments: Horses. Horses. And even more horses. It's quickly becoming very clear that I'm not going to have any free time anymore in the summer months because of... yup, you guessed it, horses. So that is why the blog has been quiet, and why I haven't commented on any other blogs recently - apologies to all! But I finally did manage to base a few of the main survivors for Mantic's The Walking Dead All Out War game. 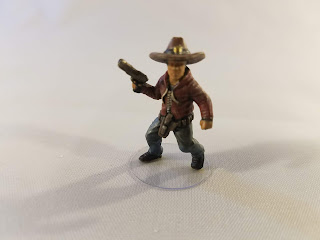 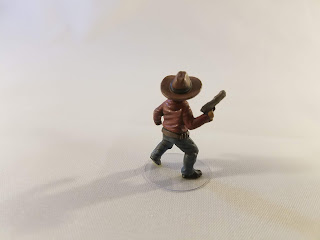 I'm not familiar with the comics - which the game is based off of - and I've heard the character is completely different from his television counterpart., but this looks like a neat character to add to your group for the game. His hat has a special rule that looks a bit fun :) 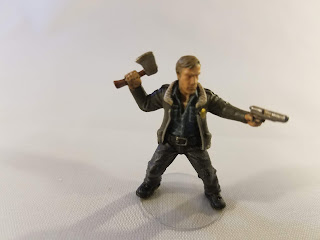 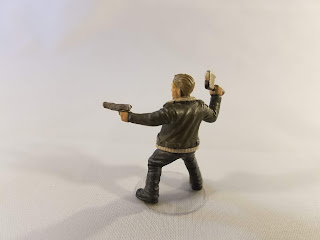 I went back and rewatched the very first episode of the television series while working on these guys, and I think I like season 1 Rick the best. He'll probably be a figure I use often - which is also why I wanted him done first. 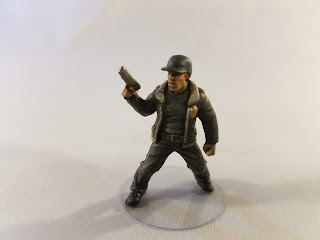 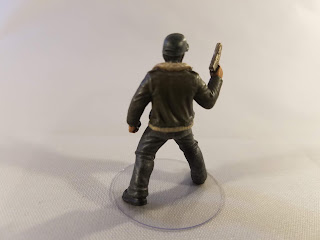 He was always kind of the good bad guy or bad good guy depending on how you look at it in the show. And the actor who plays him, Jon Bernthal, was absolutely brilliant. 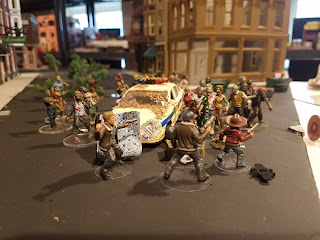 As you can see I've got them all based with the new and improved clear bases - walkers still need converted. Shane's pose made using a 20mm base impossible so he's on a larger 25mm base. But the most important thing is now I actually have a few survivors to where I may be able to play a game of TWD using the solo rules. So fingers crossed that can actually happen.

I've got two Kickstarters that arrived this month so I want to do a post on them, and a week ago was the annual D-Day Conneaut reenactment that I've participated in for the last six year, so I want to do a photo dump on that as well. Next year will be the 75th anniversary of the D-Day landings so planning has already started on that - though the event is so big already I can't imagine how much more they can actually do to make it better.

Until next time (which I hope isn't that long!), thanks for looking!
Ivor