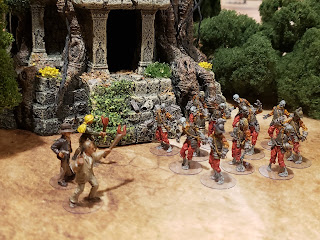 Truth be told I really don't like painting figures at all. And if I could commission out every figure I own I would in a heartbeat. But alas my financial situation won't ever allow that to happen lol! 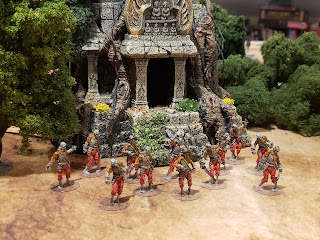 And so enter Citadel's new line of contrast paints - designed to get your models on the table quickly and to an acceptable quality. If there is something out there that is going to help get my figures painted quickly, you can bet that I'm going to at the very least give it a try. 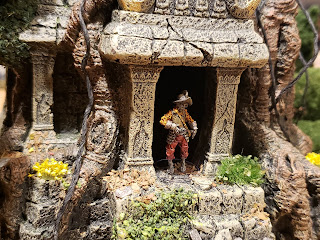 These figures were from Antediluvian's Kickstarter they ran last year and they represent zombie Spanish Conquistadors. When I saw them I thought they would be perfect for an Indiana Jones/pulp type of game set in the jungles of South America - I think it could have been neat to have seen de Orellana and all those other Conquistadors come back to life when Indy and Mutt were searching that tomb in the last movie 😃 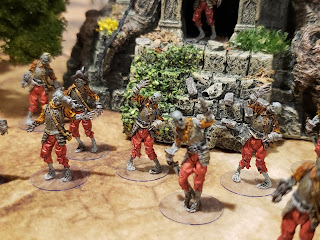 I did the entire 12 figure lot with the new contrast paints, not using any of my Vallejo paints and I'll be completely honest, I'm pretty impressed with them. I did prime them with the Citadel special contrast primer Grey Seer too, which is "allegedly" designed to work specifically with the contrast line. Are these paints for everyone? No. Is it another tool in the box to help you paint? Yes. I think this is a perfect range of paints if you're doing more fantasy types of figures as I'm not quite sure if they will work very good for military/ historic figures, but it's something I do need to give a try.
Let me just go on one quick rant about Citadel paints - first and foremost, those pots they come in are just awful. Why after all these years can't they make a container that stays open?! Second, who the heck comes up with those names for the paints?! Aggaros Dunes, Gore-grunta Fur, Warp Lightning, Wyldwood, Plaguebearer Flesh… what's wrong with trying to make it possible to actually know what color the paint is by it's actual name on the bottle lol? 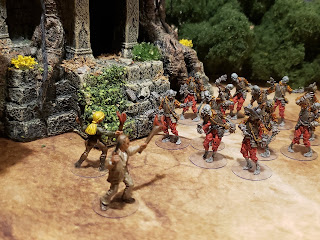 So pretty neat stuff though I do wish there was a bit more variety in each of the figures poses - there are only six unique poses so I have two of each in the horde. 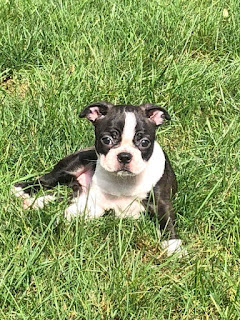 And finally a bit of family news as we just got a new puppy after the loss of our dog three months ago. This is Lucy, but I'm calling her Miss Lou. 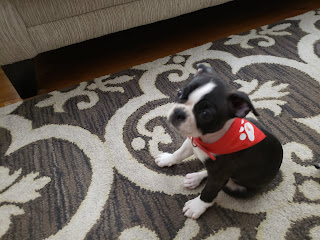 She is all of eight weeks old so it's like we have a baby in the house again. But dad already has her all set with a Liverpool collar 🤣


Until next time, as I'm still cleaning up several "draft" posts from months past and I'll have another report on a game of 7TV after meeting up with Beau and his crew - where my dice rolling was on a whole new level of absolute awfulness it was laughable! - thanks for looking!
Ivor
Posted by Ivor Evans at 4:57 AM 22 comments: 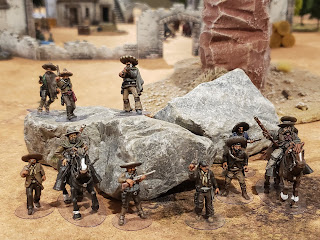 I go through these cycles where I obsess on certain genres and I am currently back into an Old West type of theme big time right now. So I've finally gotten some of my Knuckleduster Vaqueros based up, with a couple of mounted Boot Hill models and a couple of GEG figures too. 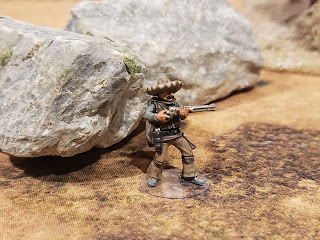 As I start working on the Alamo (see way below), I think these types of figures will be a fun way to get some mileage out of the Alamo model with some Hollywood-esque gunfights in and around it while I begin to collect Mexican army figures for the real showstopper of a battle. 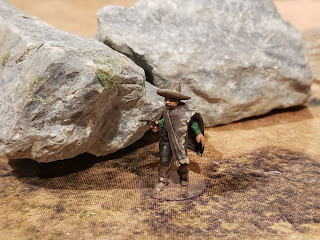 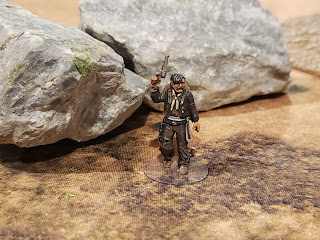 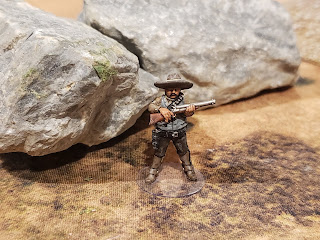 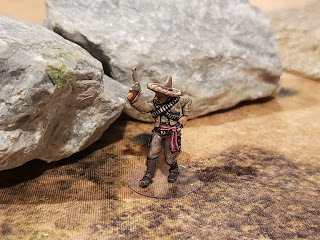 I think I can use this model in the cowboy gang from Tombstone seeing as he has a red sash and all. 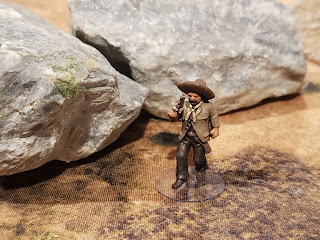 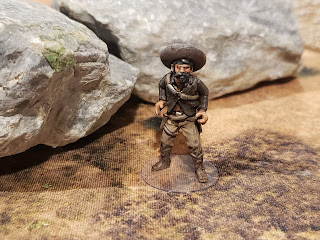 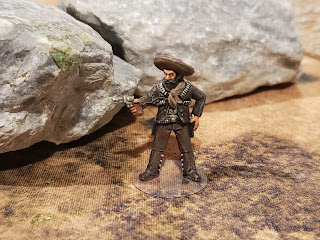 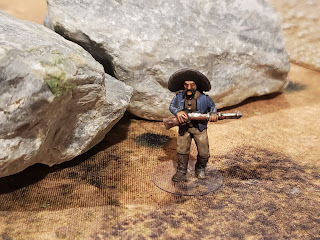 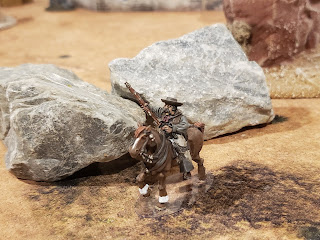 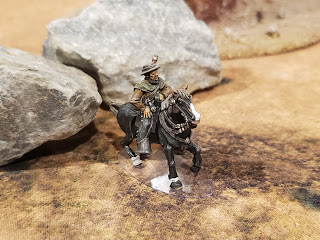 I have made a pretty hefty order from BH for some Alamo defenders so hopefully those will be here soon and I can start on those. 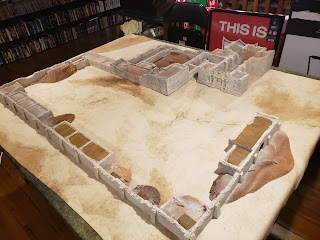 Remember the Alamo? Yeah, blame for that joke is going solely to Kieron but it's absolutely hilarious and believe me, it is going to beaten like a dead horse over the next year or so lol! 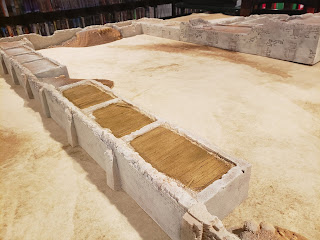 I got a really nice prime and initial painting of the walls done with a color that I'm super happy with. I've just begun to work on some of the wood on the roofs,etc. Regarding the roofs I'm not 100% sure on my color choice. I went with something lighter in tone as I figured the sun would have 'bleached' it more, but I'm not sure. Maybe it should be darker? 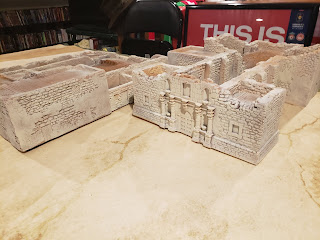 This is the first time I've ever worked with a foam model and it's been pretty fun. Painting has been super easy, and what's going to be nice is all the areas where the pull from the mold has left bubbles or imperfections, all of that can easily be fixed with the Pegasus Models bricks I have and railroad ballast for dirt and rocks. 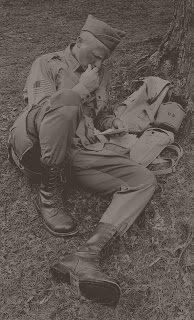 This week will be the annual Conneaut D-Day living history event and I'm really looking forward to it as this is the 75th anniversary of D-Day - and they are pulling out all the stops to say the least. They have a C-47 that you can purchase tickets for and take a ride in, so I'm really thinking that I need to do this! 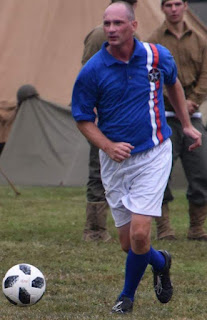 The big Allies v Axis football match is on my Friday schedule so looking forward to that.  Can't wait to share photos with everyone in the next couple of weeks.

As Always, thanks for looking!
Ivor