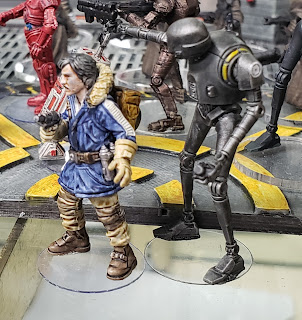 One of the biggest things that I have been doing over the last several months has been painting. Painting a lot actually. And anyone who has followed my blog for a while knows that figure painting is by far my least favorite part of the hobby. But que a new set of contacts and a pair of reading glasses recommended by the eye doctor and it's like a whole new world for me, and I'm actually enjoying painting now. The reading glasses have been an absolute game changer for me in regards to painting, basically serving as a magnifying glass. So let's jump into some of the stuff I've been working on. 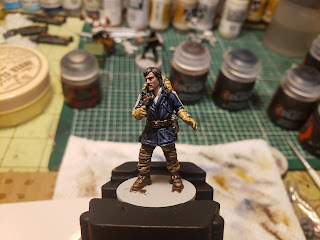 I grew  up with Star Wars and I can still remember seeing it for the first time in 1977. And even though I was only five years old, it left an incredible impression on me, and it continues to be a huge part of me today. To say that George Lucas and Industrial Light and Magic have influenced me creatively would be an understatement - and as a small "thank you" to George and everything he has given me and allowed me to share in his worlds, my son's middle name is 'Lucas' after George (who is affectionately known as "Uncle George" in our home 😀). 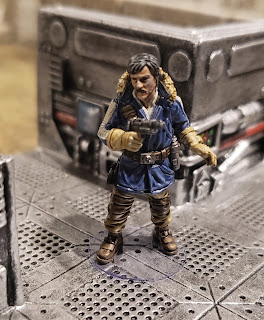 When Star Wars Legion was announced I knew I was all in regardless of what the rules were - I was ready to change other rules sets (which, if you haven't seen Jay White's excellent Bolt Action mod for Star Wars I highly recommend it!) or even make up my own to suit what I wanted to do. This game was going to give me lots of SW models and unit figures in different poses, which is always a great bonus and something Imperial Assault is missing unfortunately. 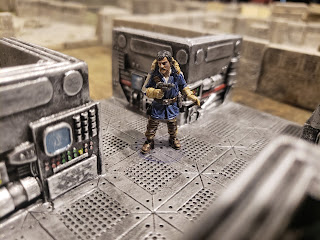 The Empire Strikes Back' had always been my favorite film until an incredible little adventure called "Rogue One" came out. I absolutely love a team mission type of story, mostly because I can always envision it on the tabletop in someway, and that movie knocked it out of the park in that regards. So it was an easy decision that the first models I decided I would have a go at were Captain Cassian Andor and K-2SO. 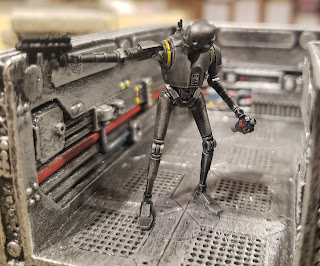 Both models were painted with Citadels new Contrast paints and I couldn't be happier with the results. The more I work with the Contrast paints the more I get used to how to best utilize them and I continue to be impressed with them. Of course not for everyone, but for me the final results I'm getting have really helped keep me at the painting desk. You can't see it on the above photo, but in the first photo you can see an Imperial insignia on K-2's left shoulder. I picked that up from Little Metal Ships. These are fantastic little decals and there are a lot of great options available (which I picked up several other sheets for future use) for Star Wars. Highly recommended to give your figures a little 😀 extra detail.
Until next time, thanks for looking!
Ivor
Posted by Ivor Evans at 10:34 AM 12 comments: 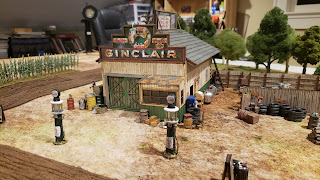 A year is an incredibly long time, and that was the last time I actually posted an update to the blog. So first and foremost, I hope that you and your families are all safe and well in these absolutely crazy times - what a year. To say it has been difficult to actually turn the computer on and update the blog (I've actually had several posts in draft mode, and even one since back in January) would be an understatement, so thank you all for sticking with me during that long down time. I'm not sure if I want to go into any real detail on the goings on of the past year as we've all had our own struggles to work through, but the most important thing for me right now is I'm hobbying again - and actually quite a lot! If I can stay motivated to keep the blog updated a couple of times a month, I easily have plenty to post about for months and months ahead from the work I've been doing (I've been hitting Star Wars and Lord of the Rings pretty hard, as well as quite a lot of terrain) since August. Now if only I can get a better camera - apologies for all the awful phone photos. 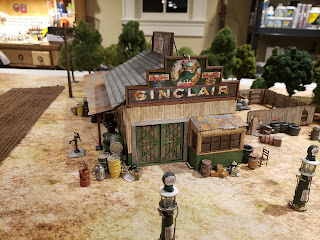 So we'll start with a kit I went back and revisited a few months ago, Samuel's Garage from 4Ground. 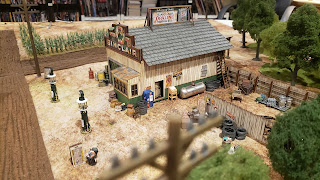 This is one of my favorites from the guys at 4Ground and I'm really glad that I decided to go back and do a bunch of improvements on my initial build. 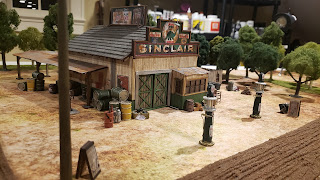 Just from a quick look you can see I completely re-worked the entire kit. From layout, to details, and most importantly weathering. 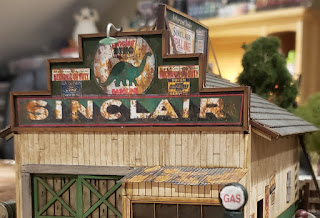 One of the first things I decided to do was to weather the entire building, inside and out. As the signs are a real focal point of the model I really made it a point to weather them in a realistic way with a heavy rusted look. 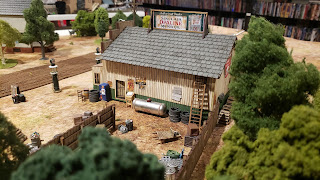 It was actually a lot of fun and makes the model really have a lived in feel to it now. 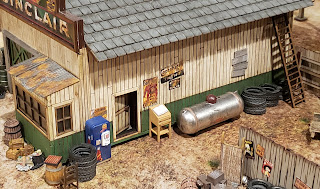 I also painted the wood along the bottom of the building in a green to match the Sinclair signs to give it a little more of a uniform look. A simple addition that really improves the overall look of the model I think. 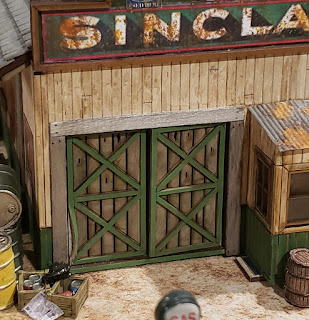 .
I added a lot of new details around the front garage doors. The doors are probably my favorite feature on the entire building and one of the main reasons for reconfiguring the aluminum overhang over to the left side was so that the doors could now be seen. With the overhang positioned where it originally is supposed to be you'd never see the doors unless you were at eye level with them, which honestly probably would never happen on the tabletop. 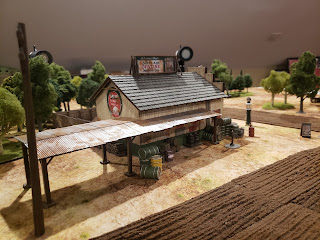 By moving the overhang I've opened up the entire front of the building and also created a really neat covered feature on the left side of the building. 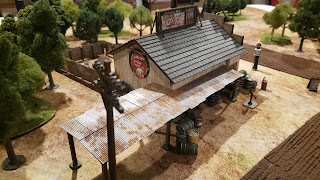 It's funny how such a simple change improves the entire model - along with all the weathering and additional signs around the building. 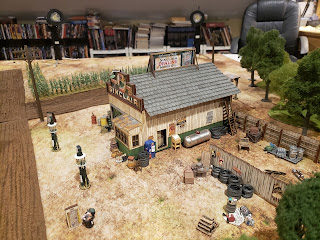 All of the little detail pieces are both O scale train accessories as well as some 28mm boxes, fences and crates from 4Ground. 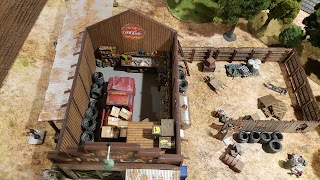 I decided to go all out and really put a ton of detail pieces into the inside of the garage, for no other reason but "why not?".  And truth be told, I went overboard lol! 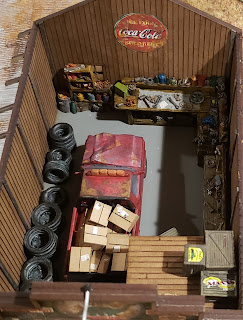 All the work benches, shelves and stacks of tires are all O scale resin model railroad accessories from Rusty Rails 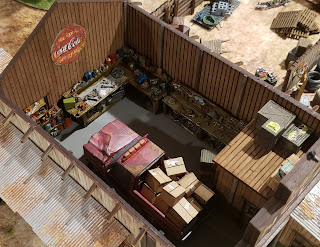 There were a ton of details to paint on these but it was fun and adds so much to the overall chaotic feel of the garage. 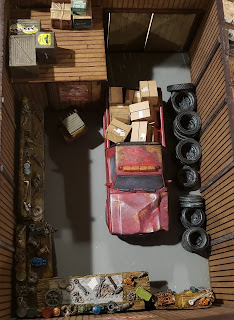 I threw the Mantic truck from TWD game with a ton of 4Ground cardboard boxes (with little custom made shipping labels on them) into the bed in the garage. One thing I completely forgot to do, and was a total head slap moment when I was editing this post was to dirty up that floor - how the heck did I miss that?! 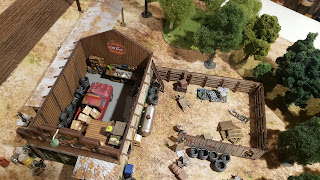 I also weathered the inside walls as well as added some studs to give the walls a little more detail. 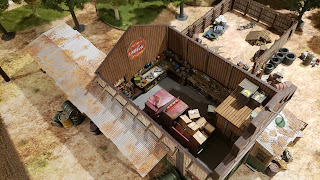 A giant Coca-Cola sign on both the front and back walls completed the interior.
If you're still here, again much thanks! And also a big thanks to all of you whose blogs I follow for giving me something to read and look forward to during my absence. It helped in ways that can't be measured.
Finally, a quick shout out to new follower Planet Mut, really appreciate you hitting the 'follow' button - hopefully the next month or so will make that follow it worth it 😀
As always, thanks for looking!
Cheers,
Ivor
Posted by Ivor Evans at 7:32 PM 28 comments: