It's kind of funny because I actually prefer not to play when we have more than two people over for a game. I get much more enjoyment out of seeing others have fun with what I've built and painted. Or it could just be because I'm awful at actually playing games!  Plus, it gave me a chance to take some pictures to use in this, my very first attempt at an AAR.


The first game we played had Jakob running Pinkerton’s and Steve running Outlaws. We played 13 points, but I allowed more figures/points that I brought in at strategic “cinematic” points in the game - neither player knew that at the time though! The goals were pretty simple – the Pinkerton’s had to get a cash box into the safe room in the bank (it would take two figures to carry the cash box though) and the outlaws had to steal it for themselves.


The Pinkerton’s started with two men inside the stagecoach with the cash box and one man riding a horse alongside. The two drivers and the stagecoach were treated as NPC’s, which I controlled. I used hidden deployment for the first turn because when the stage entered town it came to a “Y” and could go one of two ways. The Outlaws gambled and put more men towards the railroad, the longer way to the bank, and of course the stage drove in the other way!


As the stage headed down the side street, the Outlaws took the first casualty as the Pinkerton riding on the horse took out an ambush attempt from the alley of the Sante Fe Hotel. It was here that I had some Old West gun fight sound effects queued up from You Tube on my phone - it was fun to see the shock, but ultimate approval, on both Jakob and Steve's faces! I ended up doing this throughout the game and it definitely added to the enjoyment. As did the score to 3:10 To Yuma by Marco Beltrami I had playing in the background. 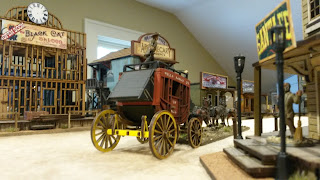 We had our real first epic cinematic moment in this game! Steve had one of his outlaws in the second floor of the Sante Fe Hotel and as the stagecoach started to turn in front of the building, he had his Outlaw burst out of the second floor window and use the porch roof to jump onto the stage! It was a pretty impressive move and I had him roll some nerve tests to see if he completed it, which he did.


This move ended up starting a neat little fight between the two Pinkerton’s inside the stage and Outlaw on top. A gun battle ensued as the stage continued to make its way towards the bank, lots of 1’s rolled though, ultimately the Outlaw ended up falling off after being shot once (we rolled a nerve test for balance on a moving vehicle) and one Pinkerton fell off attempting to climb out the window to reach the roof.


The stage was just about to the bank when the first group of reserves came out – two Pinkerton’s came out of the Gun Shop to help get the cash box safely to its destination. Both of the Pinks made their way around to the front of the bank as quickly as they could.


With only one man in the stage, Jakob decided to try to get another Pinkerton in there as fast as he could to help carry the cash box out. The Outlaws were closing in fast and furious when three more reinforcements burst out of the Silver Saddle Saloon directly in front of the bank!

An Outlaw stole a horse hitched near the saloon and quickly made his way around to the back of the bank. A move that ultimately won Steve the game as this figure ended up ambushing the Pinkerton's from behind in the banks main entrance near the end of the game. 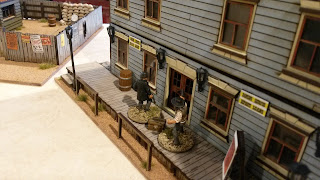 The two Pinkerton's taking the cash box into the bank. 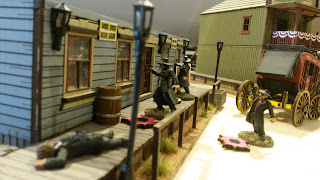 The three Outlaws quickly made their way across the street, killing one of the Pinkerton's during the fight at the front entrance. Lots of wounds were taken by both sides, as it was point blank shooting at this part. Both sides felt initiatives would prove vitally important. Jakob ended up playing two of the swap initiative cards from his hand during the last few turns here and interestingly the swapping of initiative cards ended up not helping the Pinkerton's at all because of bad dice rolls.  Not only missed shots, but lot's of 1's were rolled! The amount of "Out of Ammo" markers on the table was staggering. 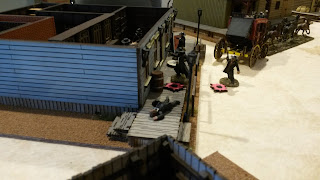 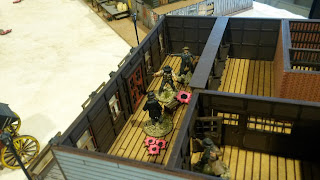 A Bunch Of Meddling Kids

I had mentioned in my Ghostbusters post about the Scooby Doo gang, well here they are. 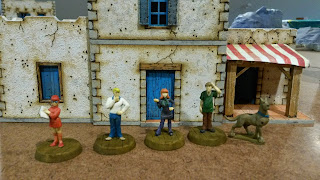 I've always loved Scooby Doo since I was little and when I first saw these figures I had to get them. They've seen work in both Betrayal At House On The Hill (some pretty fun scenarios played out with the gang being abducted by aliens, Velma and the corpse bride, and Frankenstein's monster amongst others) and also Clue: The Great Museum Caper.


I also have a Mystery Machine that I need to build and paint up to complete the gang. The van is from Armorcast and the decals from Company D. 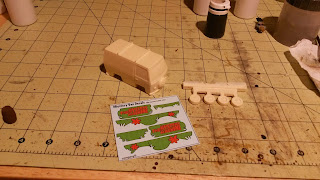 What I'd really like to do as well is find some figures that could represent the "classic" villains from the original cartoon. But what I really should do is not even put the idea of buying/finding more figures into my head! 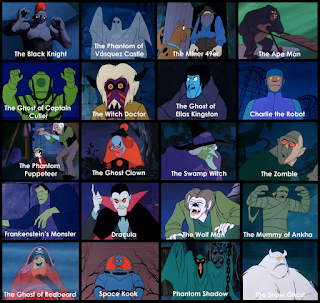 The goal for the gang next is to put them into a game of Pulp Alley. Something I've wanted to do for a while now, but I'm having a bit of hard time grasping the rules for PA. For whatever reason the fighting rules have me a bit confused. I think if I had someone who has played the game show me first hand how a game runs, I'd get a much better grasp of the rules.

Here's a few photo's of each member of the gang. 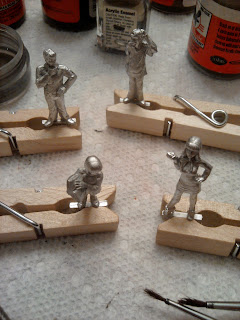 There are some fantastic character cards you can download on Boardgamegeek.com for Betrayal. Just print them out and cut them to fit over the character cards that come with the game. Apologies, as these photos were taken before I rebased the gang. 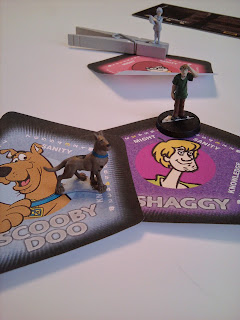 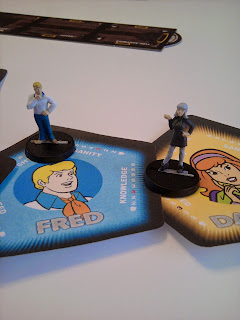 The gang works really well with Clue: The Great Museum Caper as well - here is a photo of our board with upgraded paintings. For those of you who have never played, one player takes on the role of the "thief", who's job is to break into the museum and try to steal as many paintings as possible without getting caught. The other players take on the role of "guards", here the Scooby Gang, while attempting to figure out where the thief is to capture and stop him from stealing priceless paintings. The thief's moves are hidden, so the guards never know exactly where he is. Only after a painting is stolen and taken off the board do the guards have a "general idea" where the thief was. We've tweaked the game quit a bit with the paintings being given values, the Mona Lisa for instance, is worth the most points and is generally placed where it is the hardest to steal. Extra "thieving" equipment and moves are given to the thief in our home rules as well. Ideally it would be great to build a new, bigger museum (perhaps multi-floored) to really take the game to the next level. A really fantastic game, taken to a whole new level with the additions we've made! 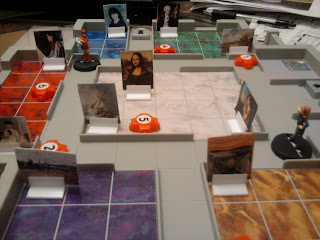 First, I'd like to say that even though I haven't updated the blog in about a month, I actually have been working on stuff. I'd like to also give a tip of the hat to the blogs I follow - it's amazing that you are able to put posts up once or even a few times a week! Well done guys! Ever since the horses came back home from their two month training down south I can't seem to get to the computer as often - though I am still painting and building. 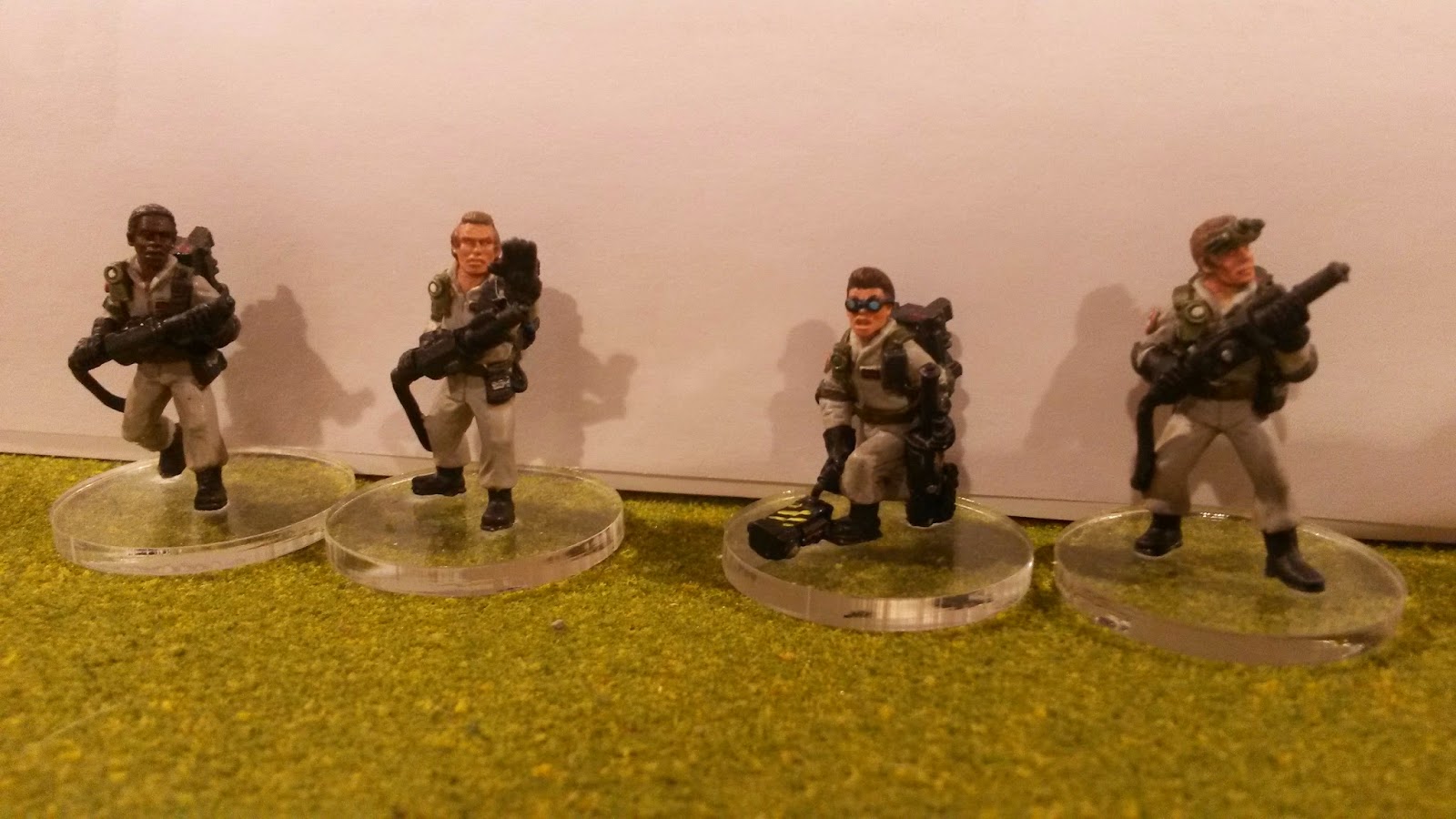 I wanted to show my Ghostbusters figures from Crooked Dice Miniatures I finally finished a few weeks ago. I got these quite a while ago, possibly close to a year?, I'm a huge Ghostbusters fan (built a 1:1 scale replica of the Proton Pack several years ago that remains my best work to date) so when I saw these figures I immediately purchased them even though I knew shipping and transit time from the UK was going to be brutal. 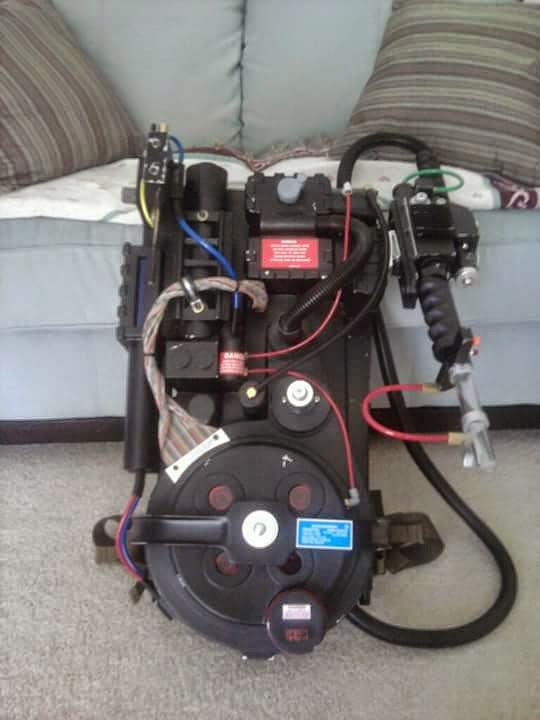 I think I primed them within the first week I got them, but like every project I start, I start another before one is complete. So they sat on a shelf for what seemed like forever. 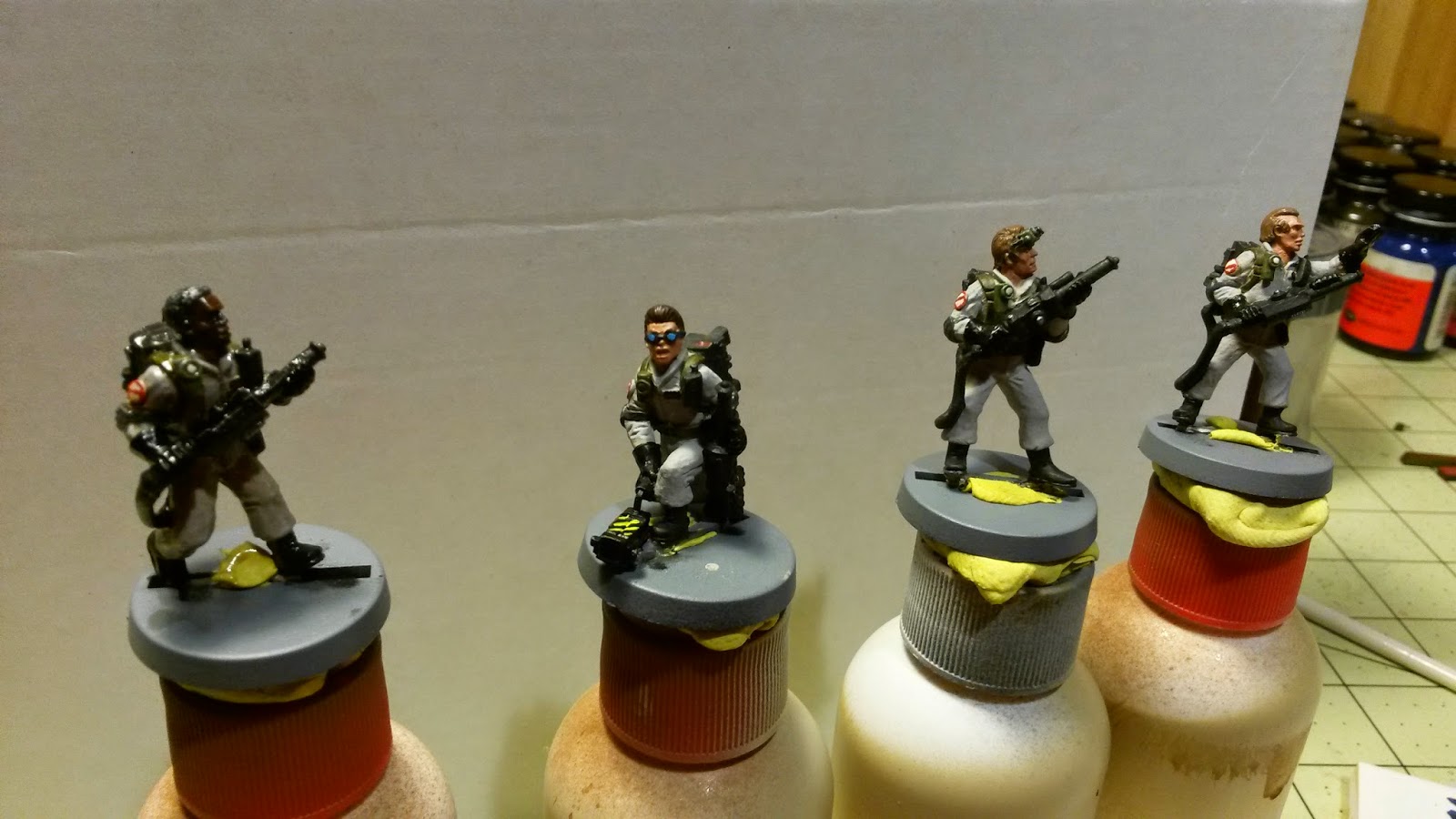 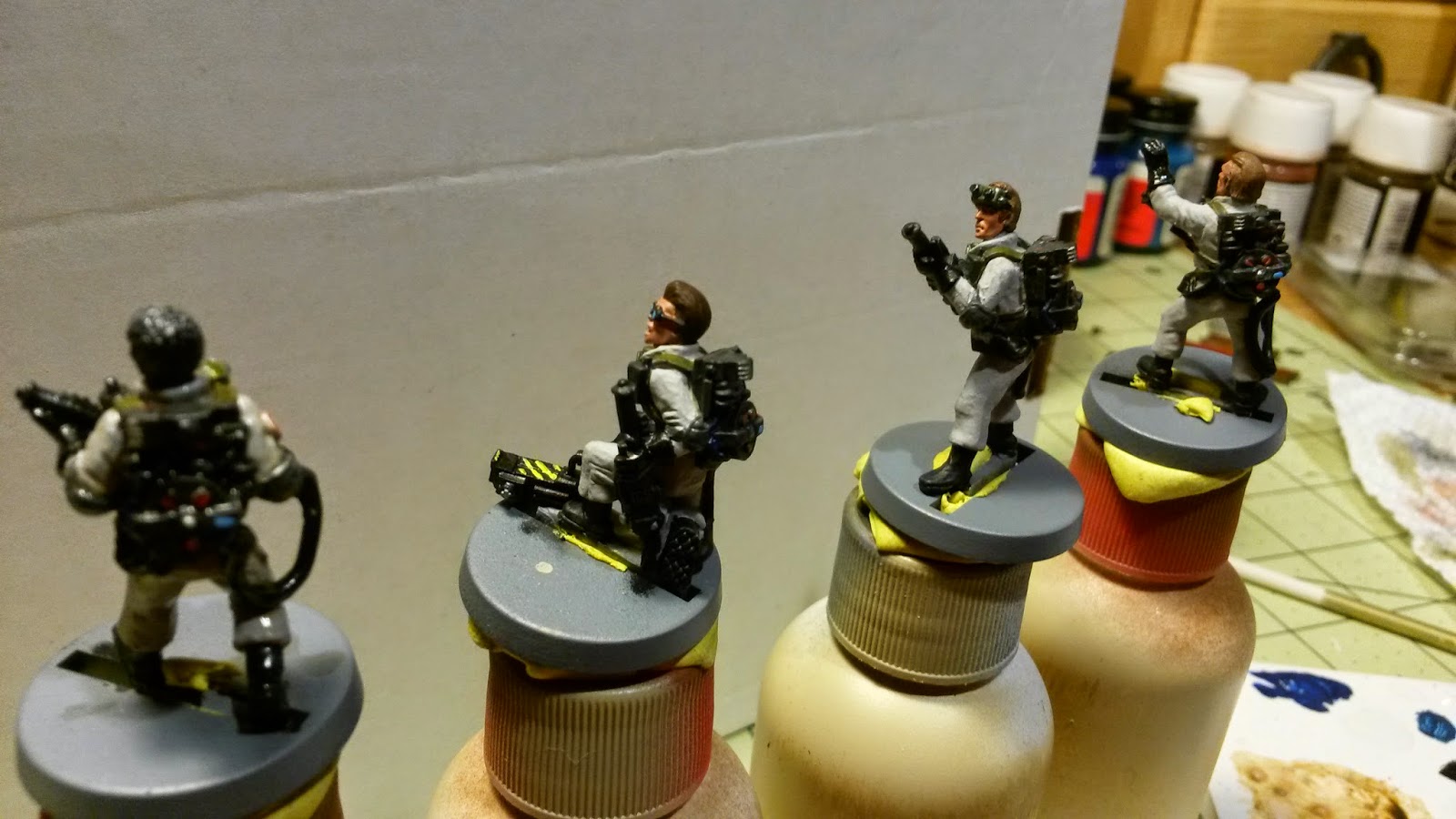 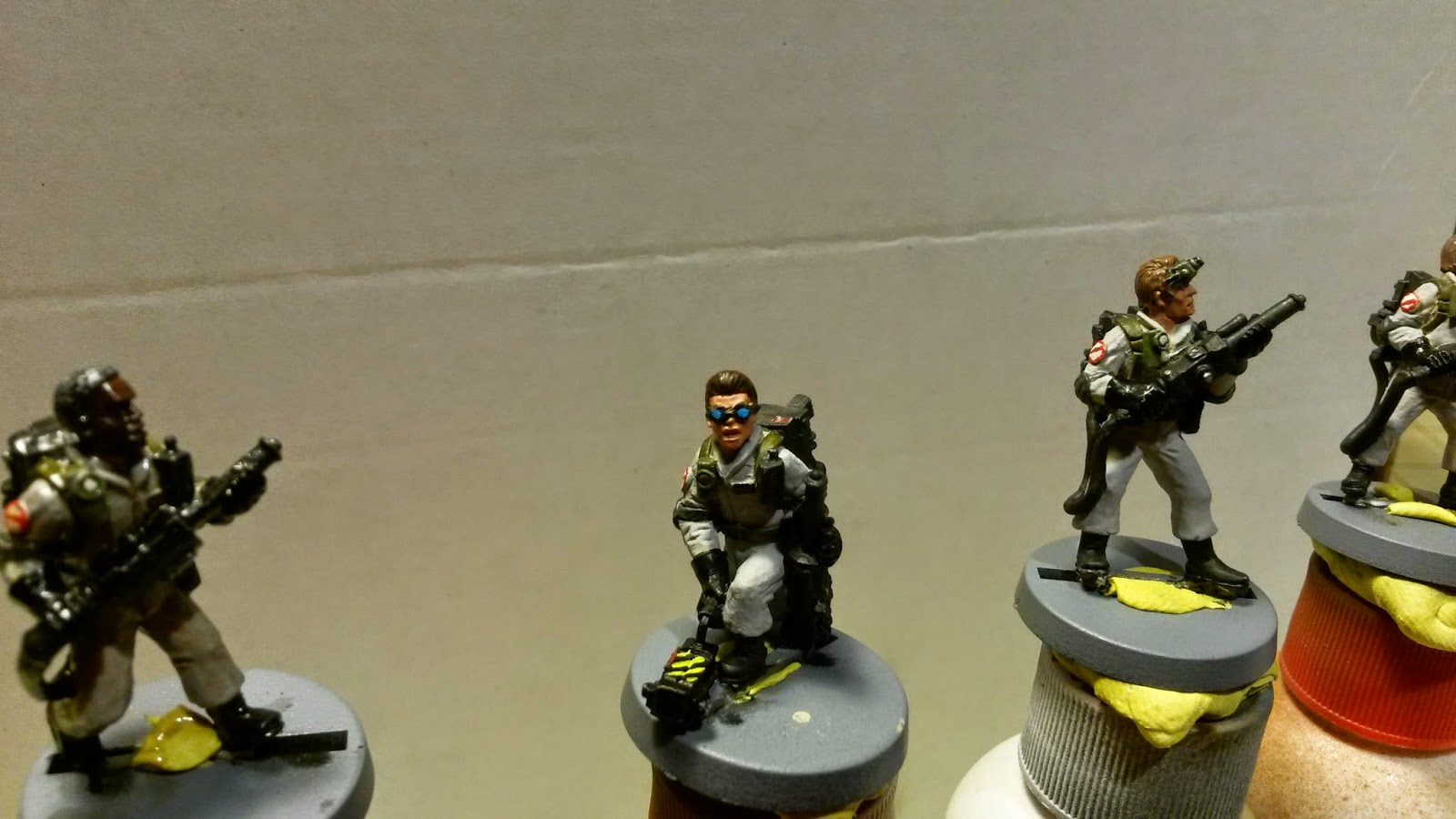 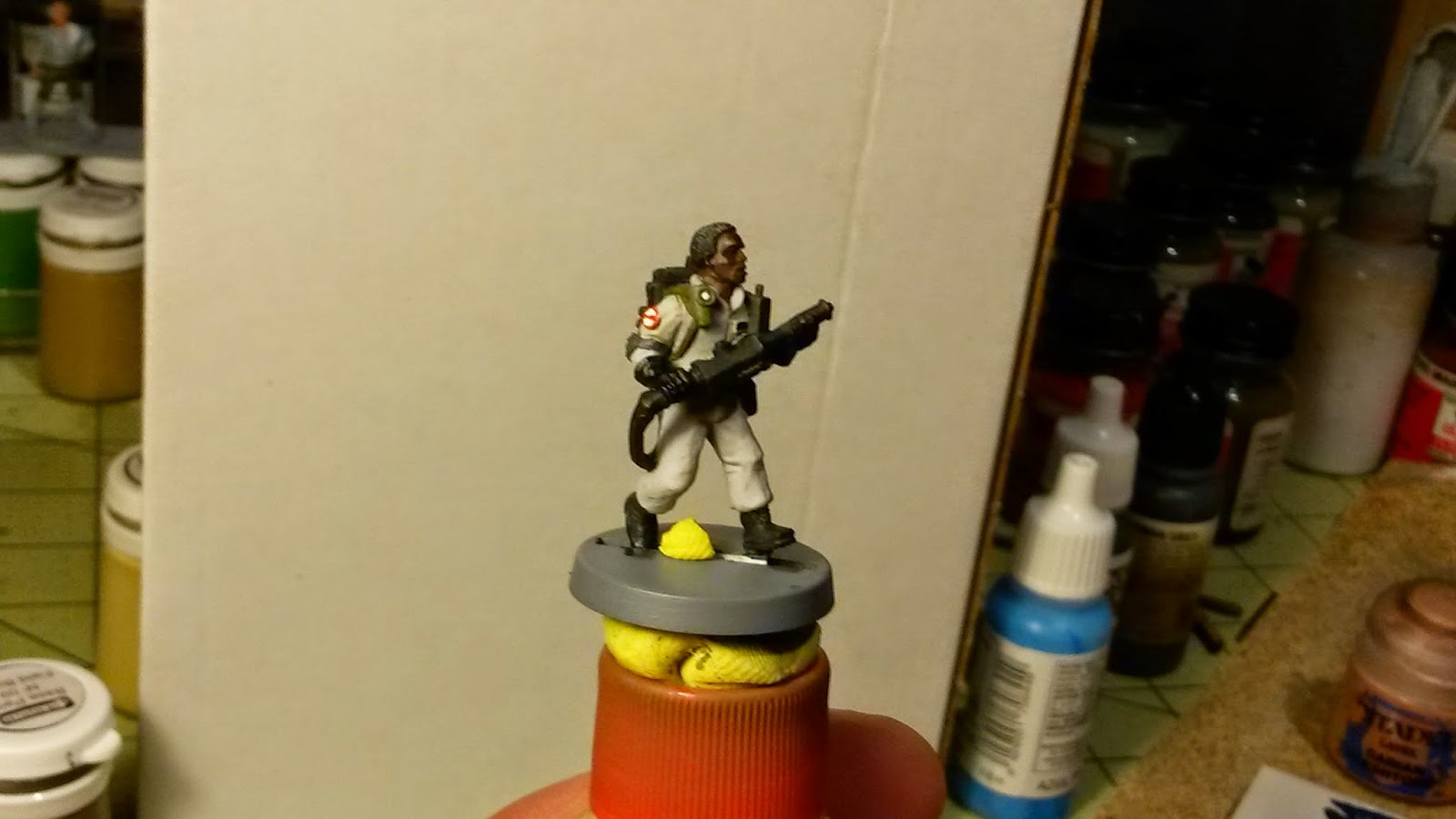 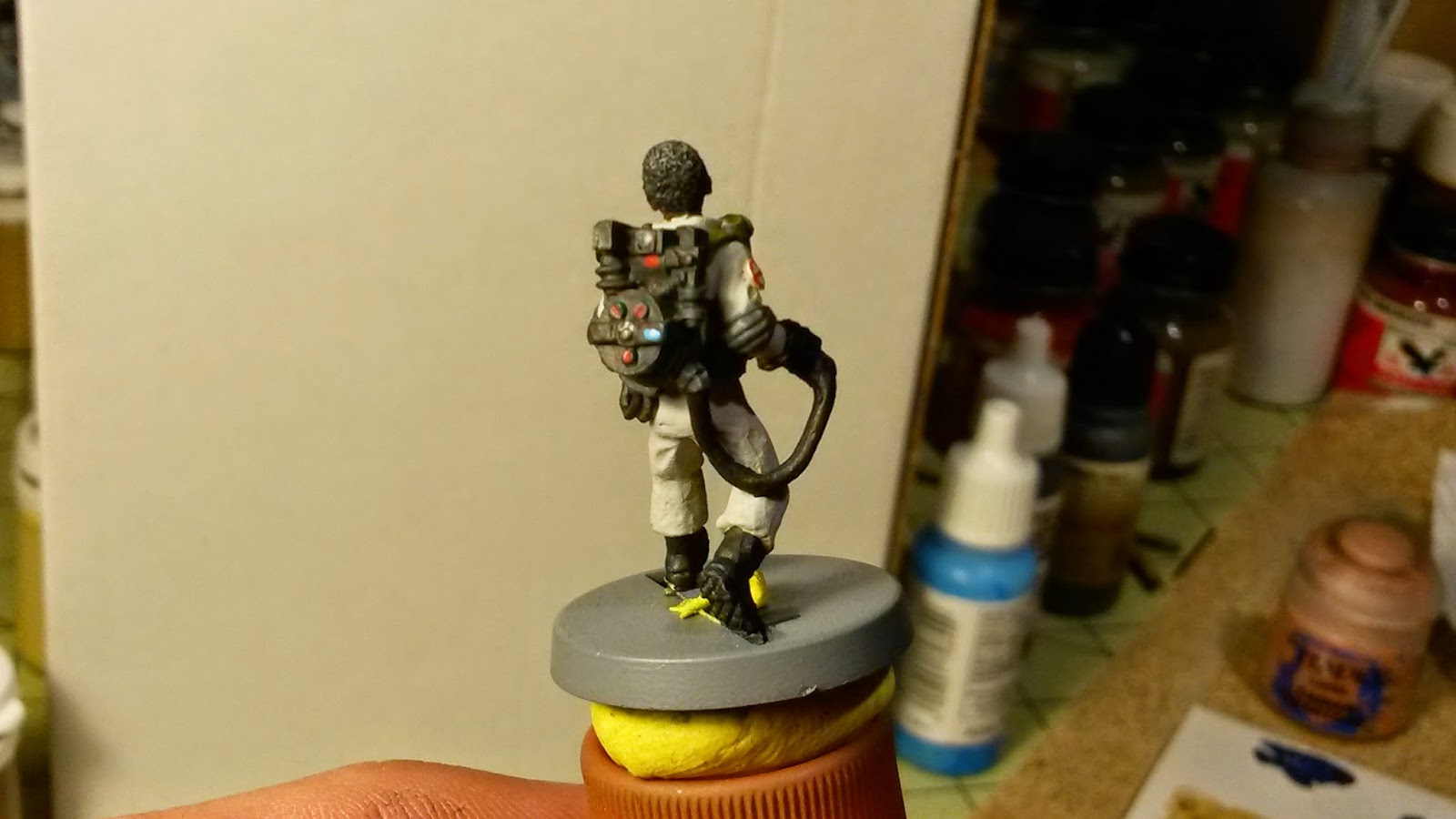 My son had been playing Betrayal at House on the Hill quite a bit lately (a really fun board game where you build a house as you play until one of the players turns on the others - certainly more to it than that, but that's the quick idea) and I thought about how cool it would be to put the Ghostbusters characters into the game - I'd already put the Scooby Doo gang miniatures from Hasslefree into the game, which is another post I'm planning on doing, and it was really fun. 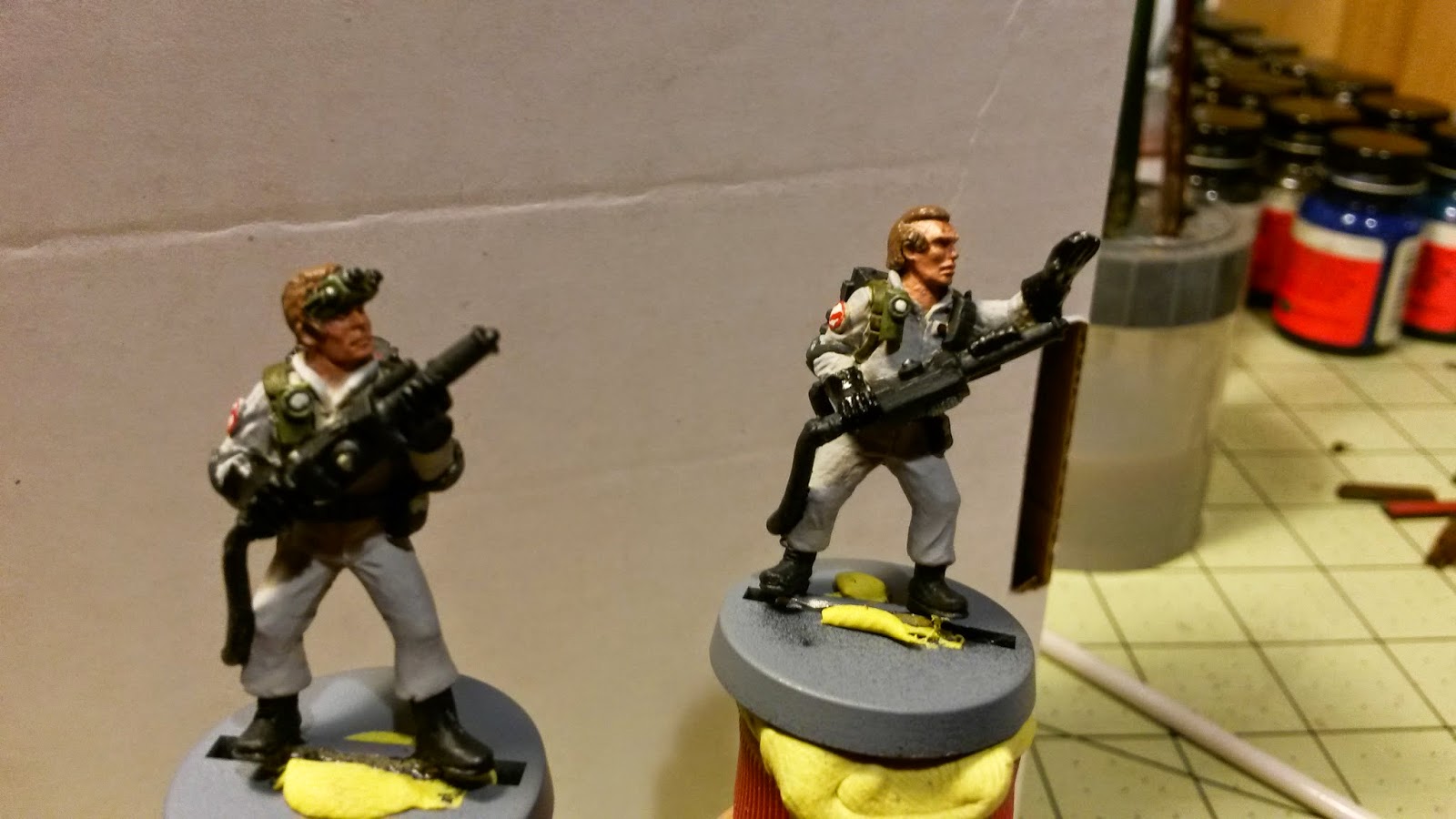 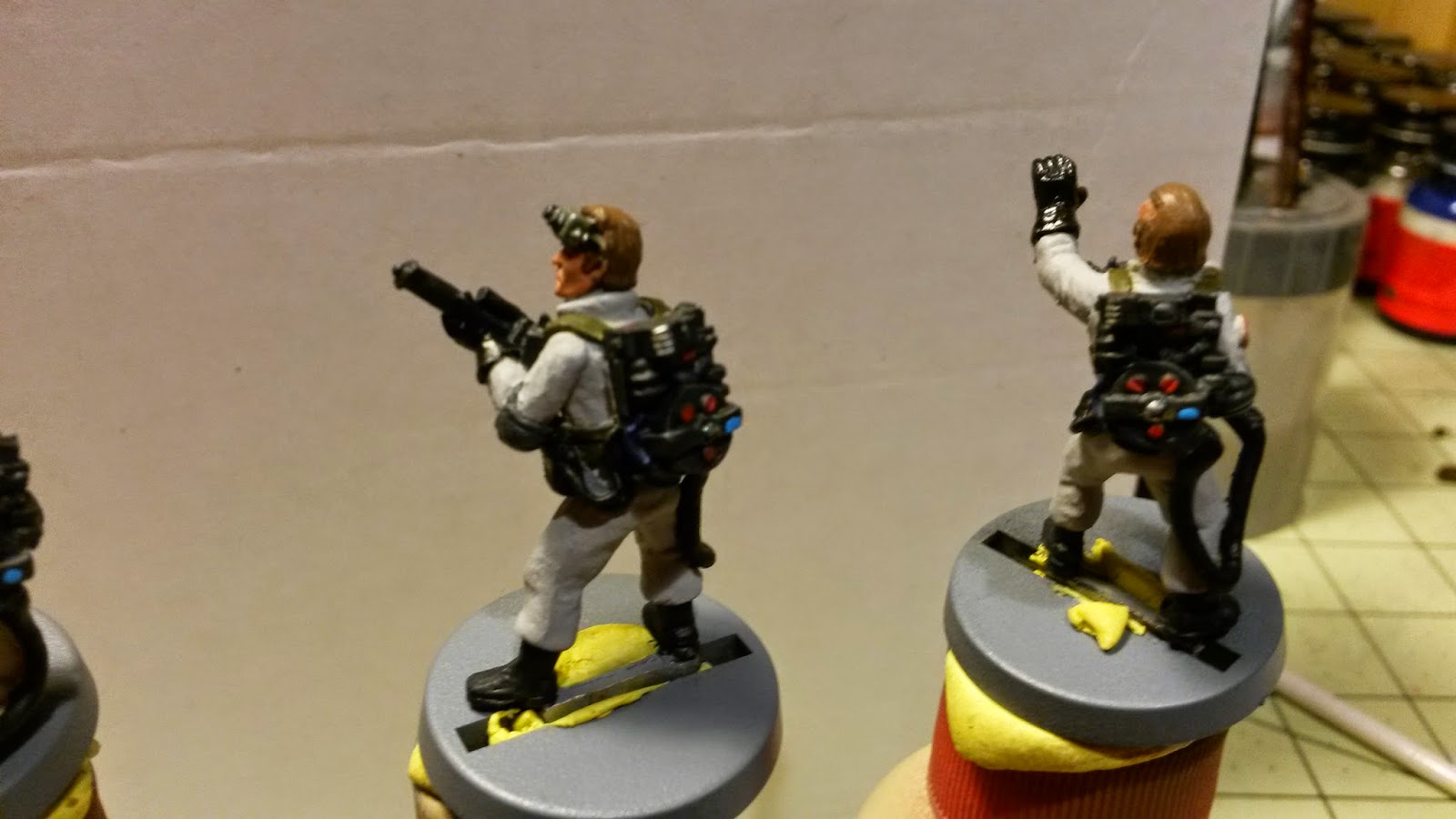 With International Tabletop Day coming up on April 11th I set out to get the Ghostbusters painted up so they could explore that creepy house on the hill. 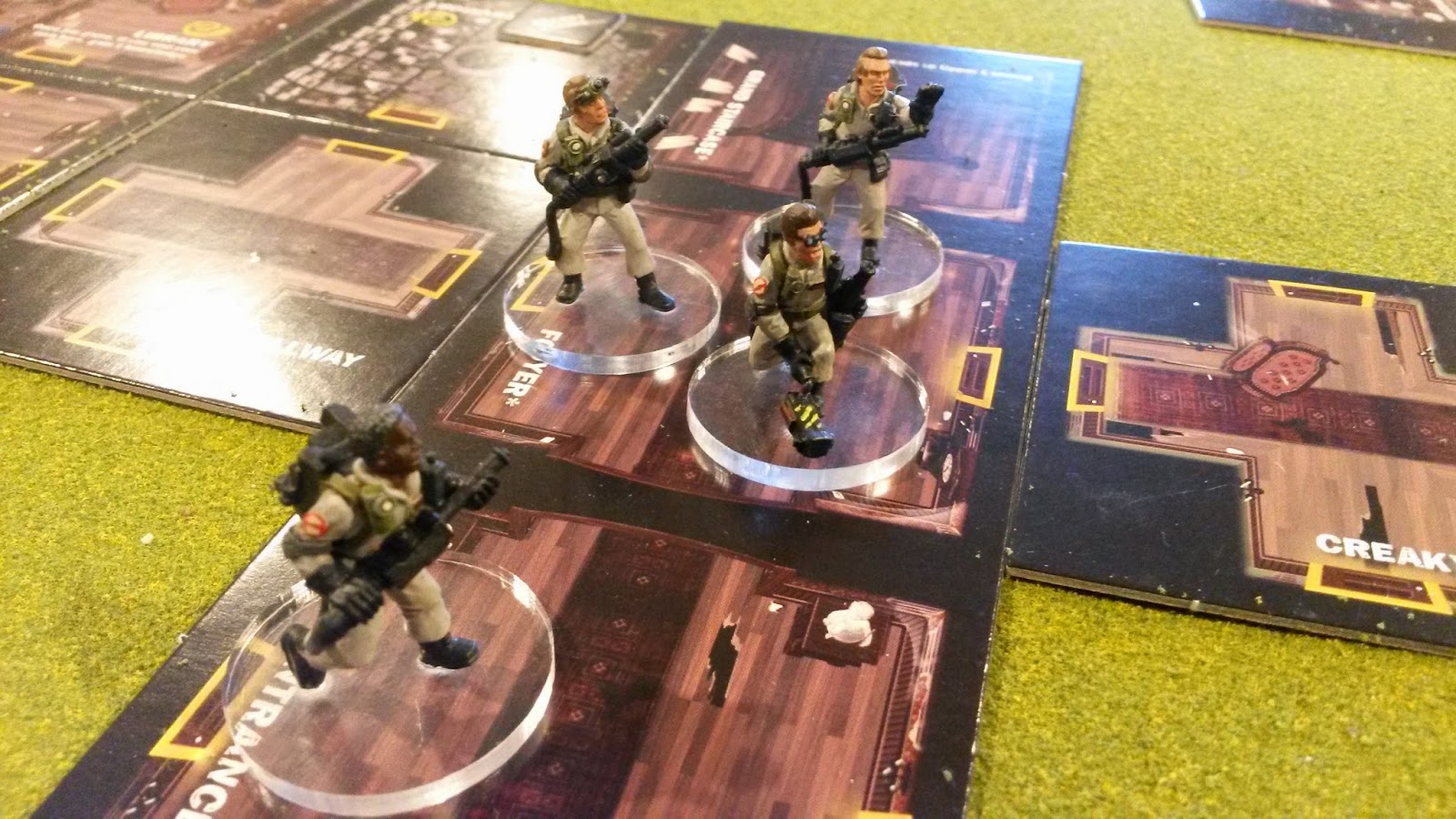 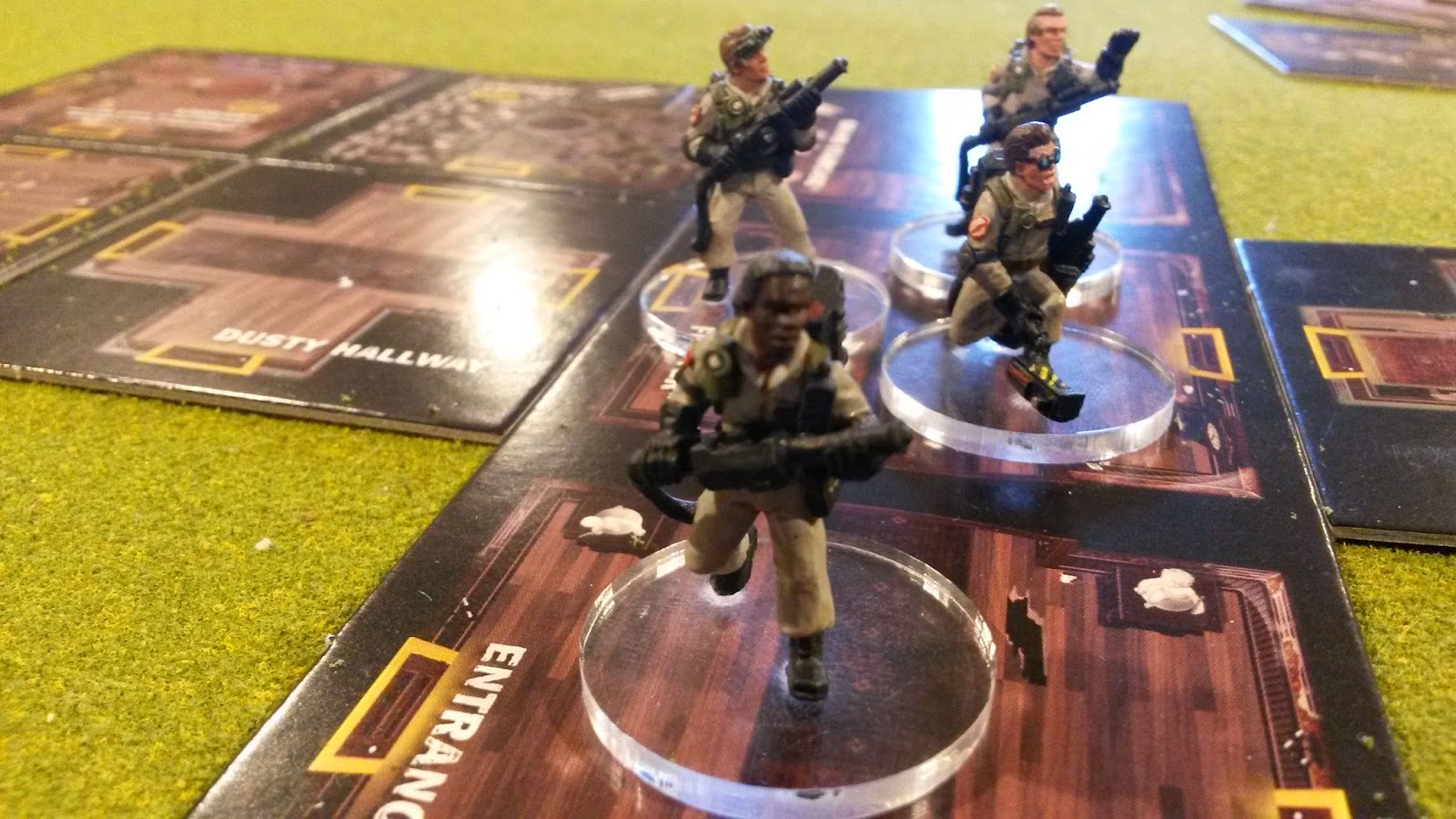 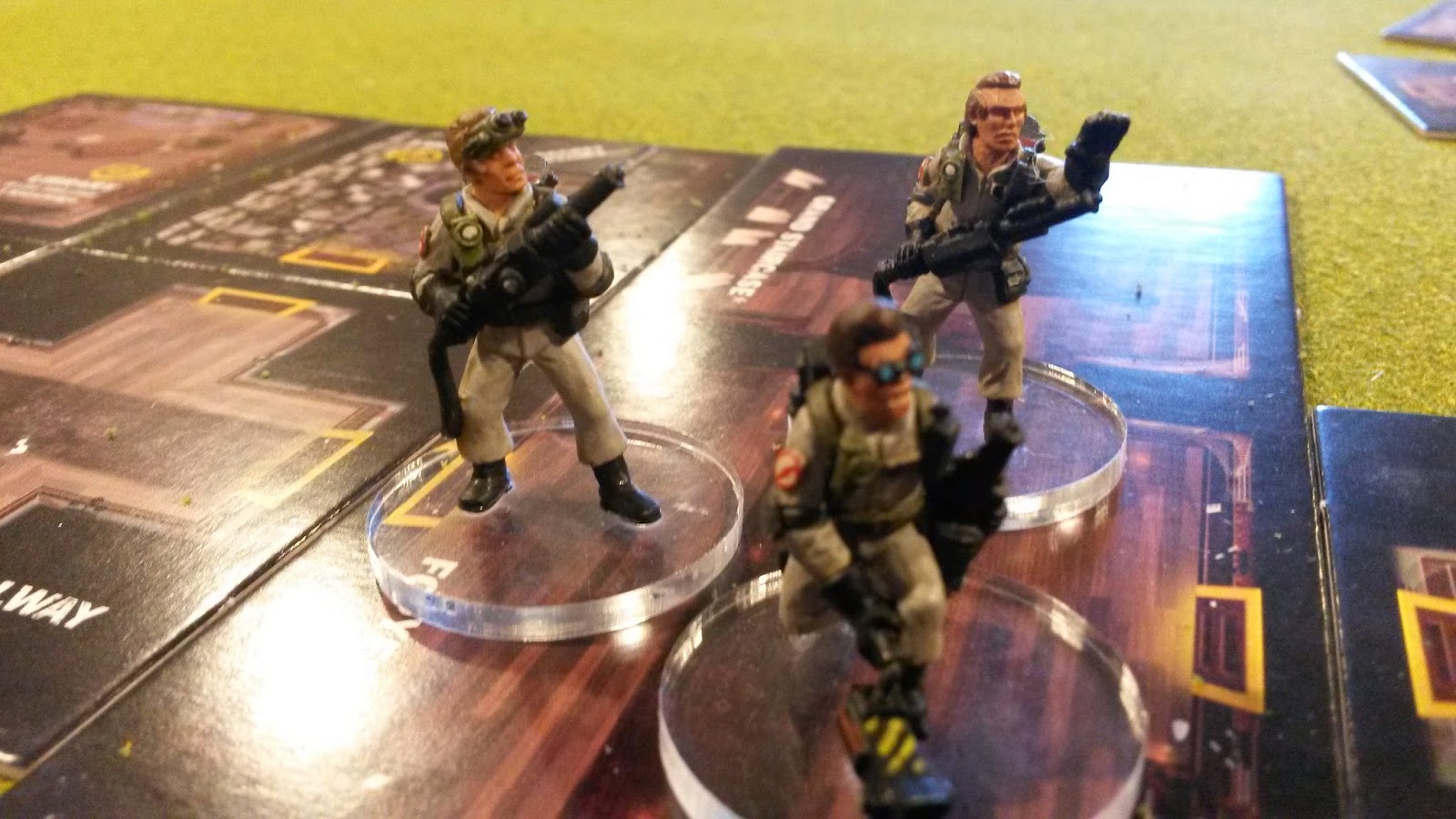 It worked out great and a lot of fun was had. I just need to make character cards for each Ghostbuster and it'll be finished 100%. 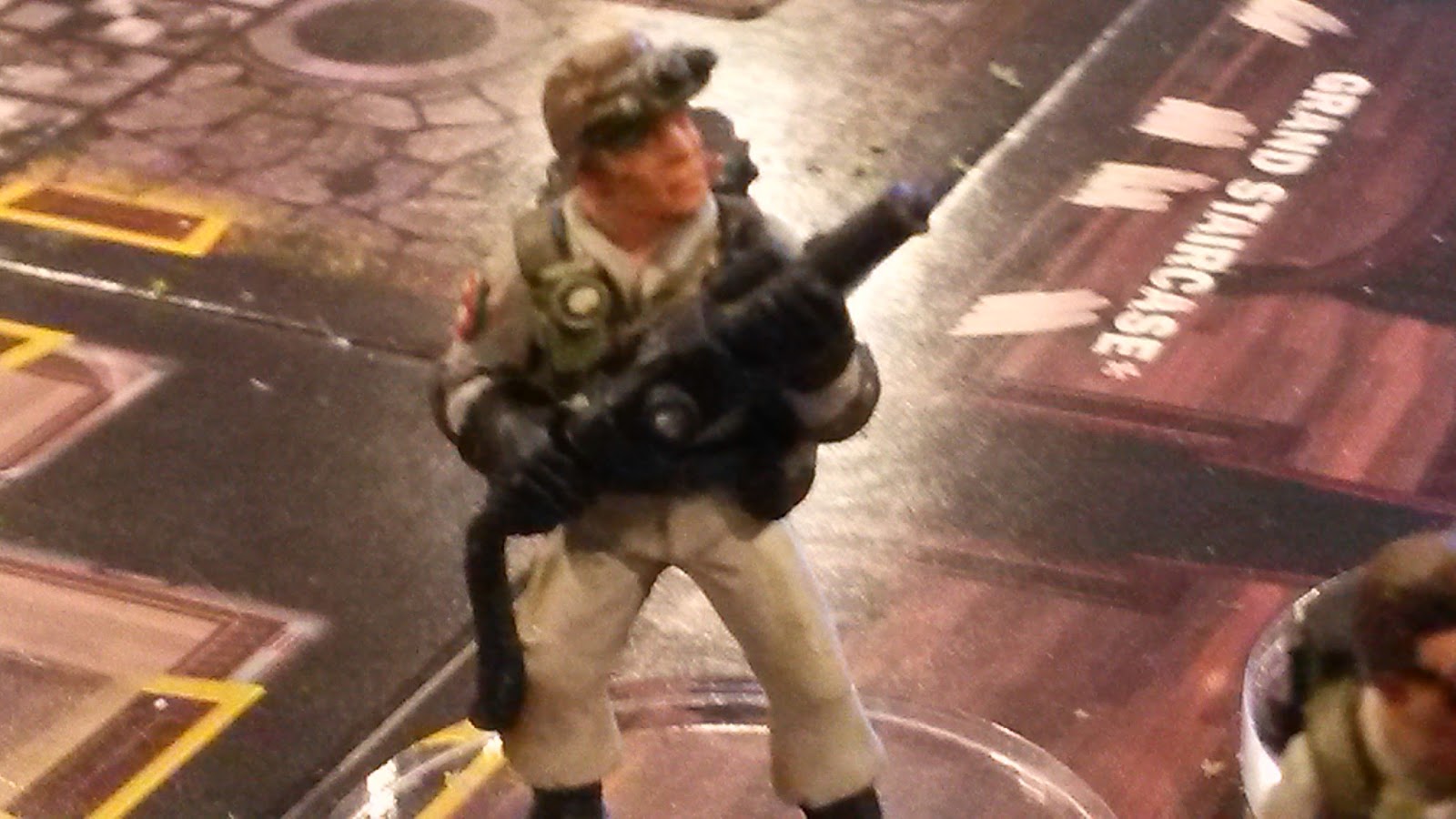 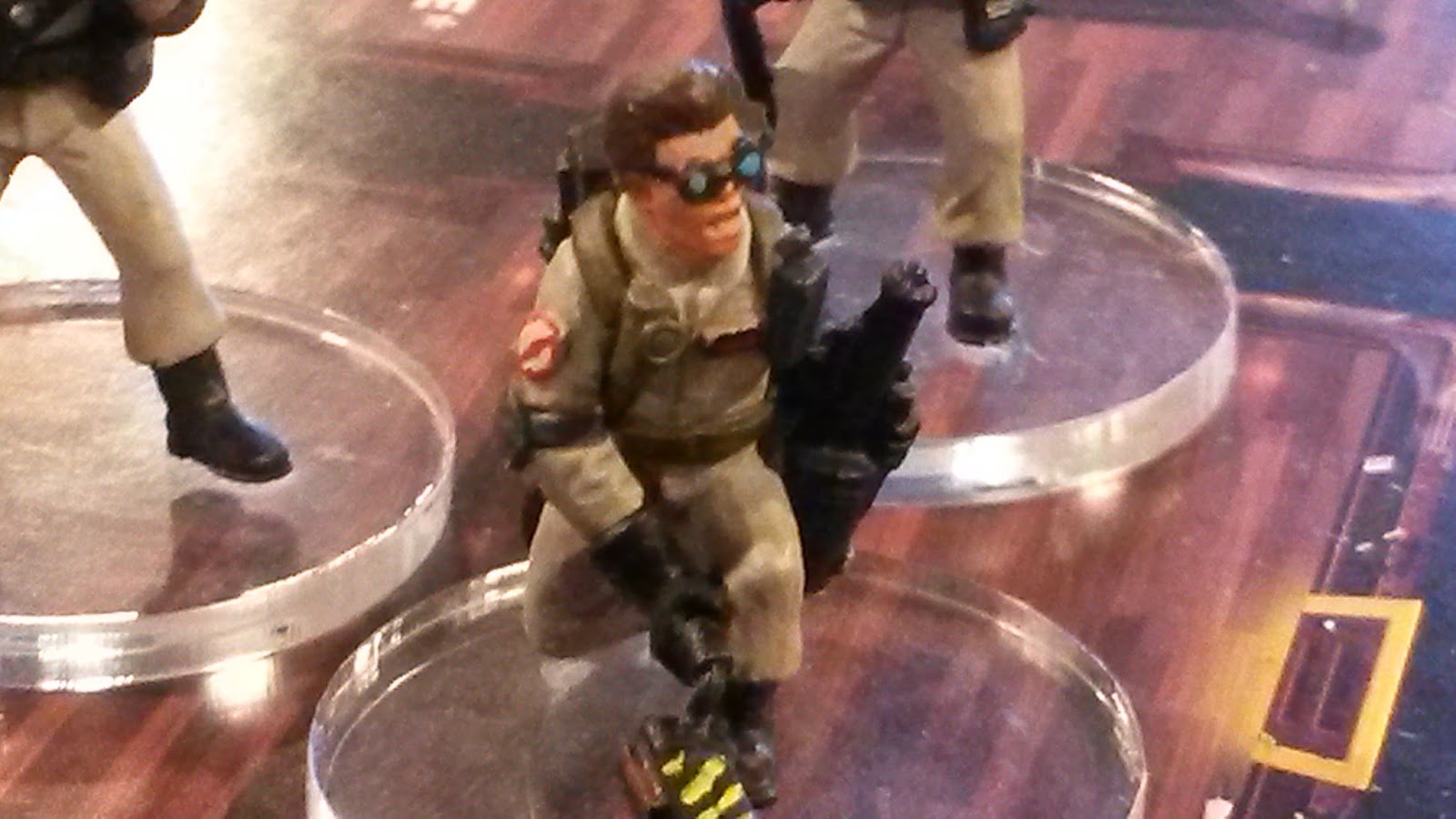 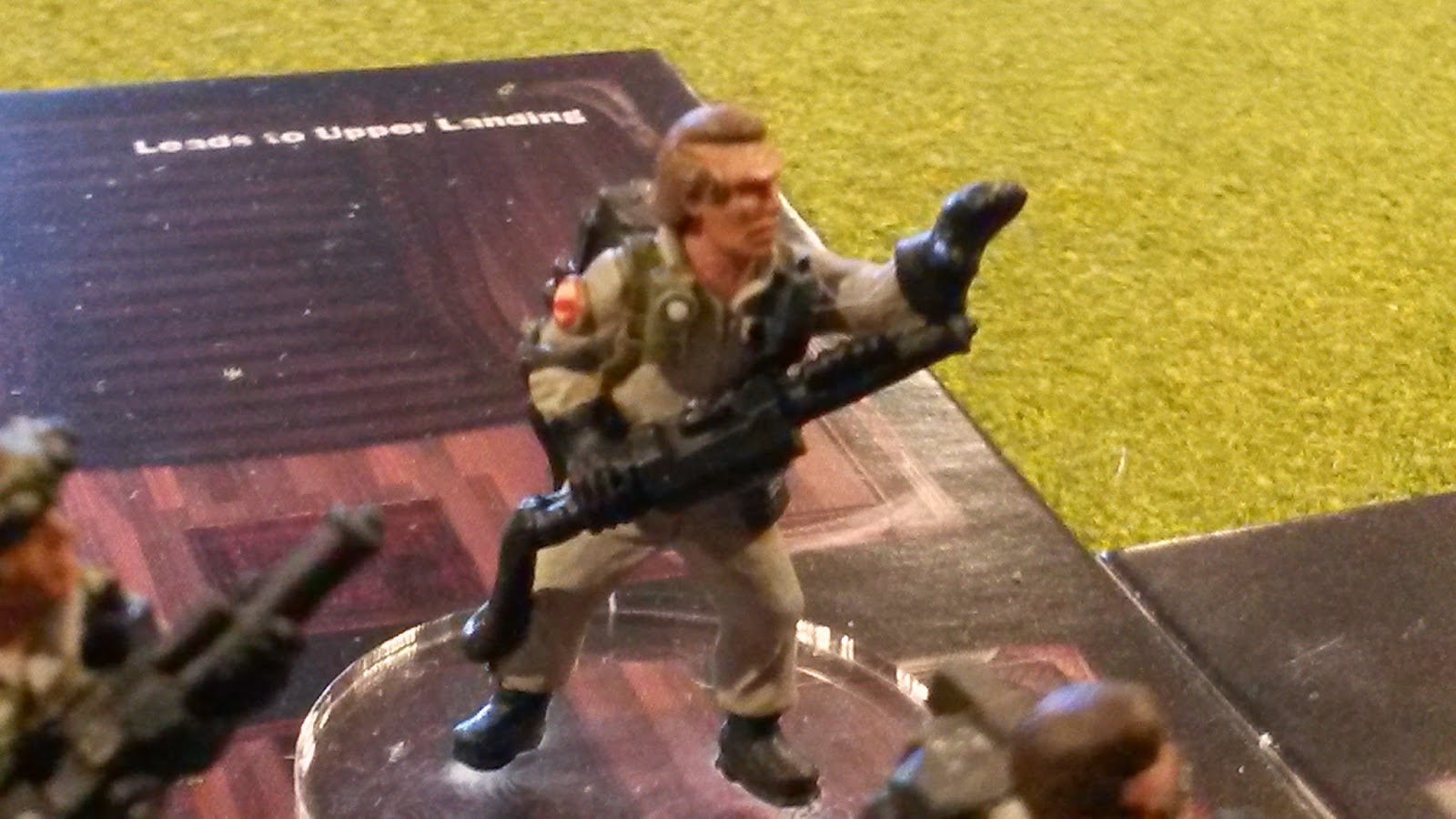