DMH - Changes to Rogan's Bar and the Undertakers 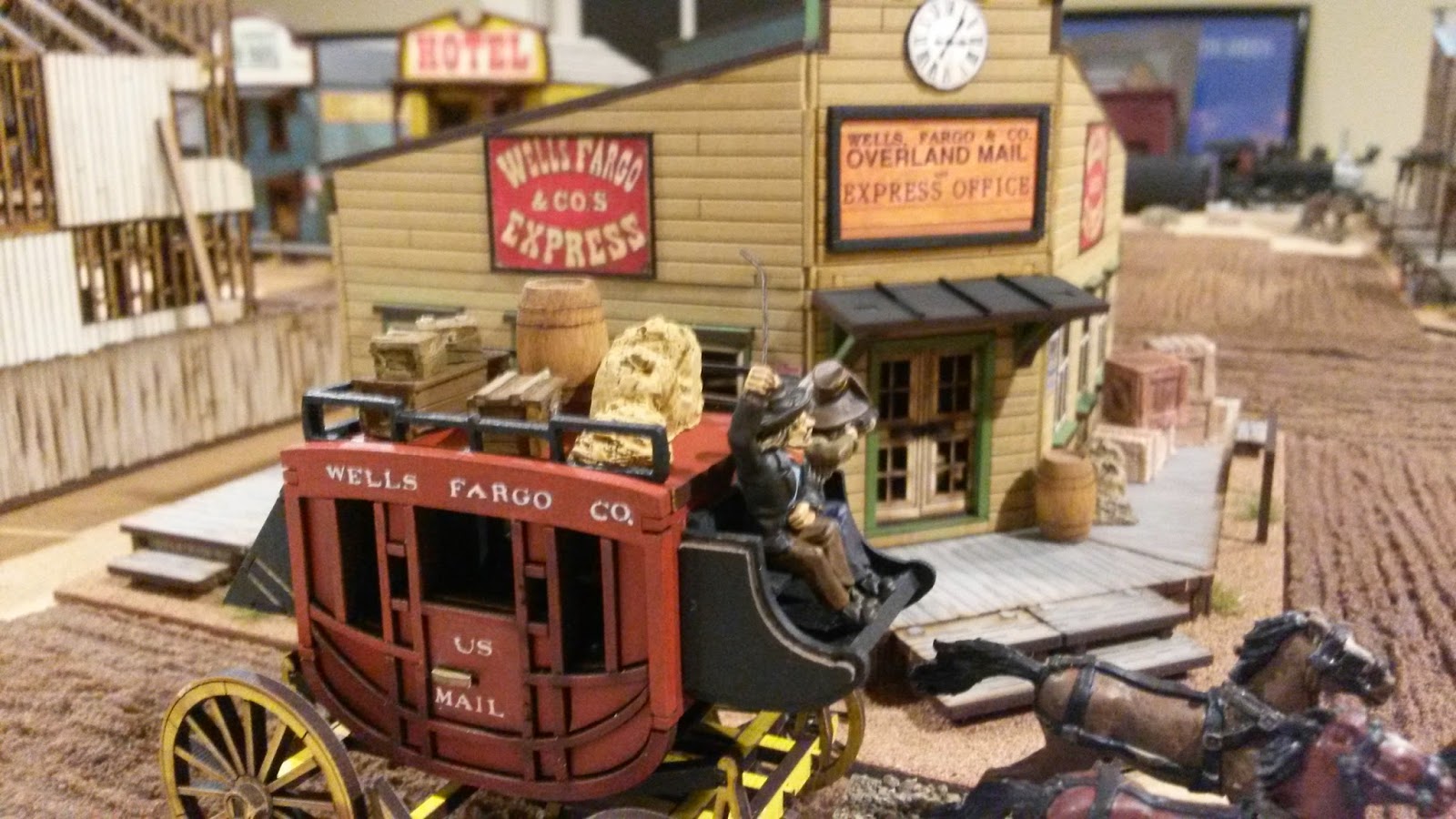 This next set of builds I moved onto were some of the feature buildings. These buildings are some of my favorites. They are much bigger than the first run of buildings, but more importantly, they are corner buildings! There is just something I have always loved about those types of structures. 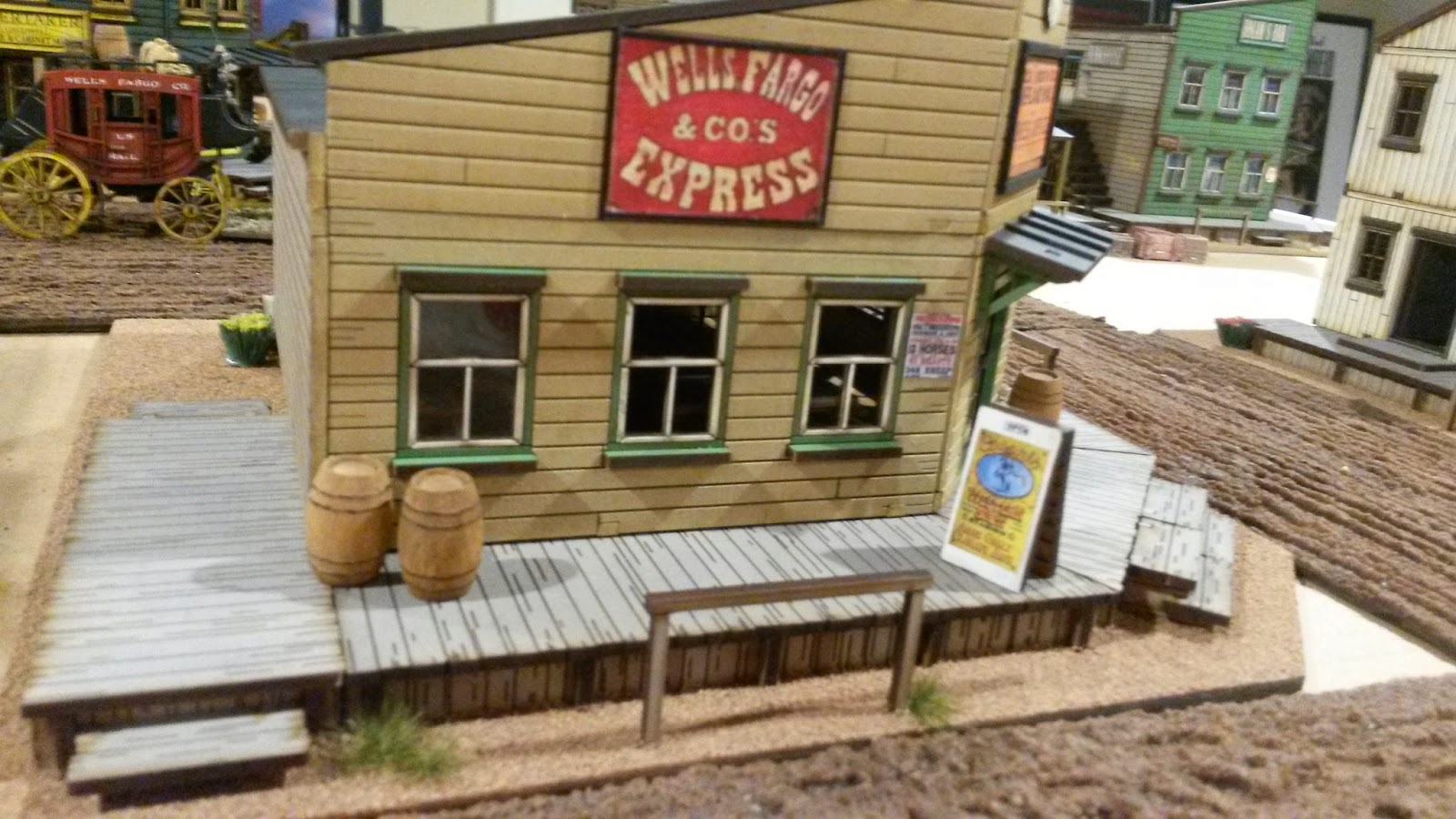 This first building is the Wells Fargo & Co's Overland Mail & Express Office. It is actually the first floor of Rogan's Bar and the Undertakers front door and roof. The second floor of the Undertakers I used in another building as you'll see in a future post. I repainted the outer walls with Army Painter Skeleton Bone and the window and door frames with Army Painter Goblin Green. 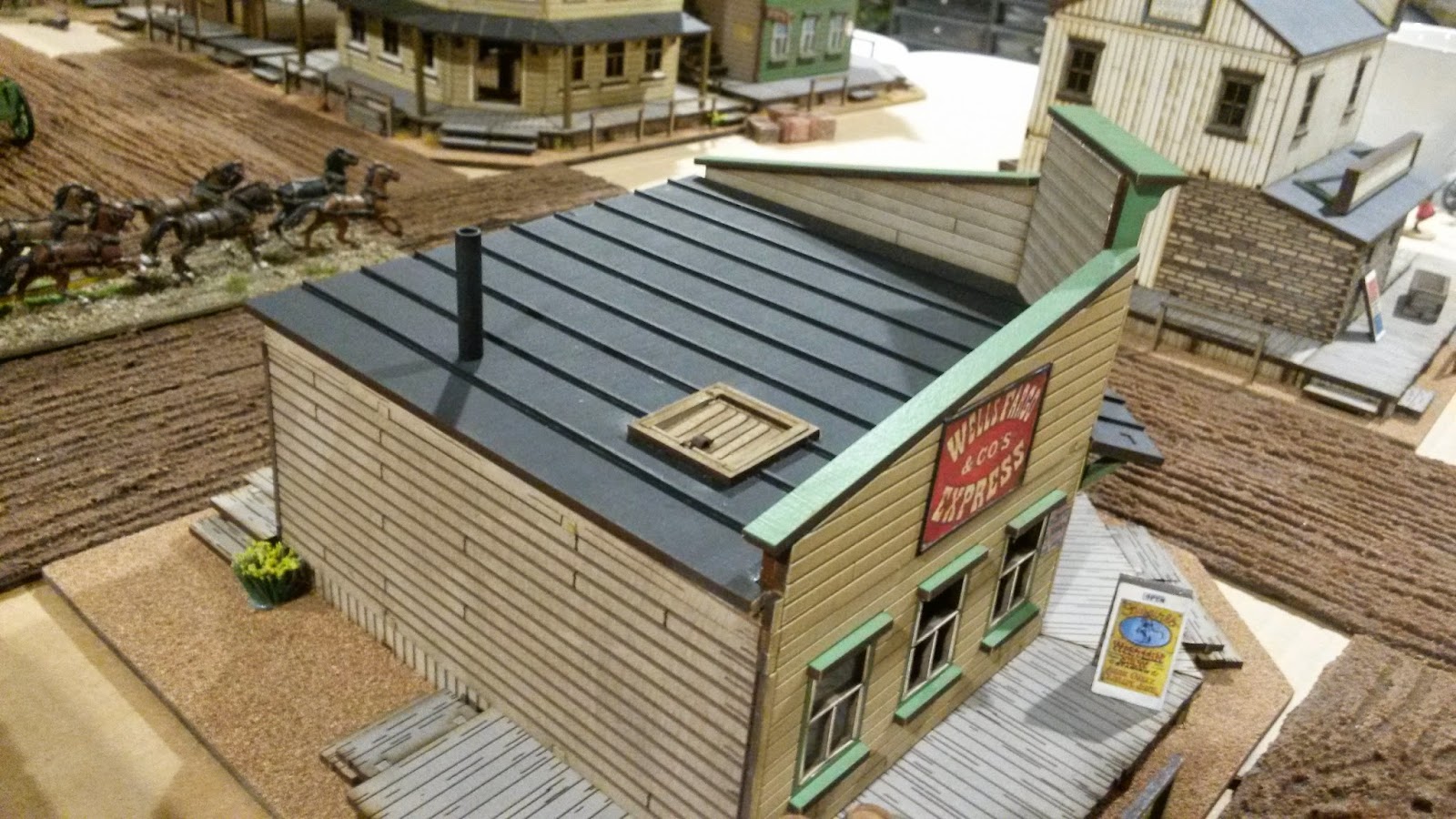 As with the other builds, styrene strips were added to the roof and porch overhang to give it a little more variety - and a stove chimney as well! Please excuse the five windows that don't have glass - those are in the process of being replaced. 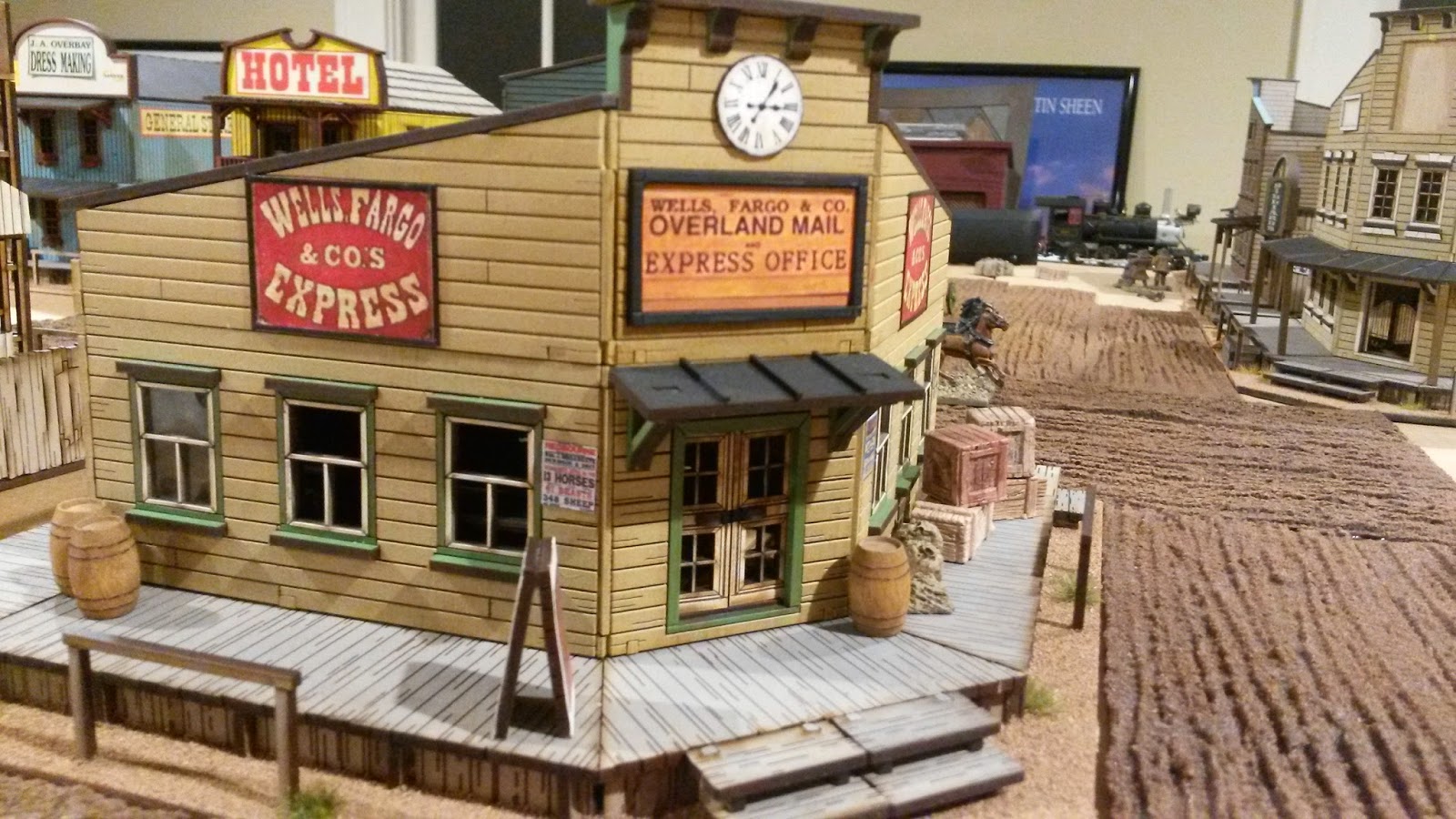 Again, since this was originally Rogan's Bar, I really couldn't use those glass signs in the windows and I was having a time and a half trying to clean off the printing on the acetate. I have since used old figure blister packs to use for glass on all builds after this. These have worked out brilliantly as they are much more rigid than the acetate and way easier to work with in my opinion. 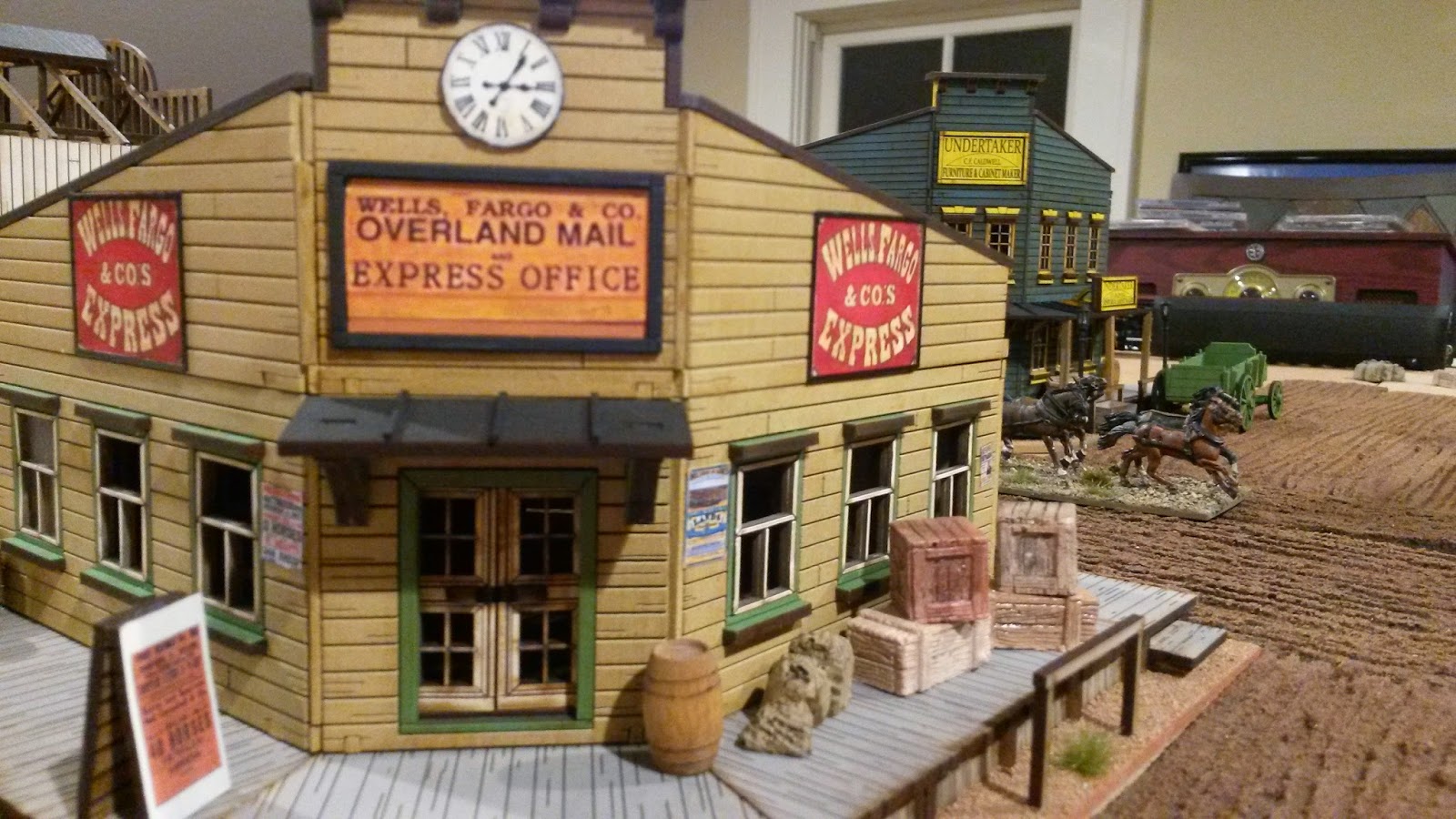 Being a stagecoach office I felt it appropriate to put a clock above the main sign, plus I promised myself I'd throw a few clocks on some buildings if I ever got the chance. And I love how this one is almost at 3:10! 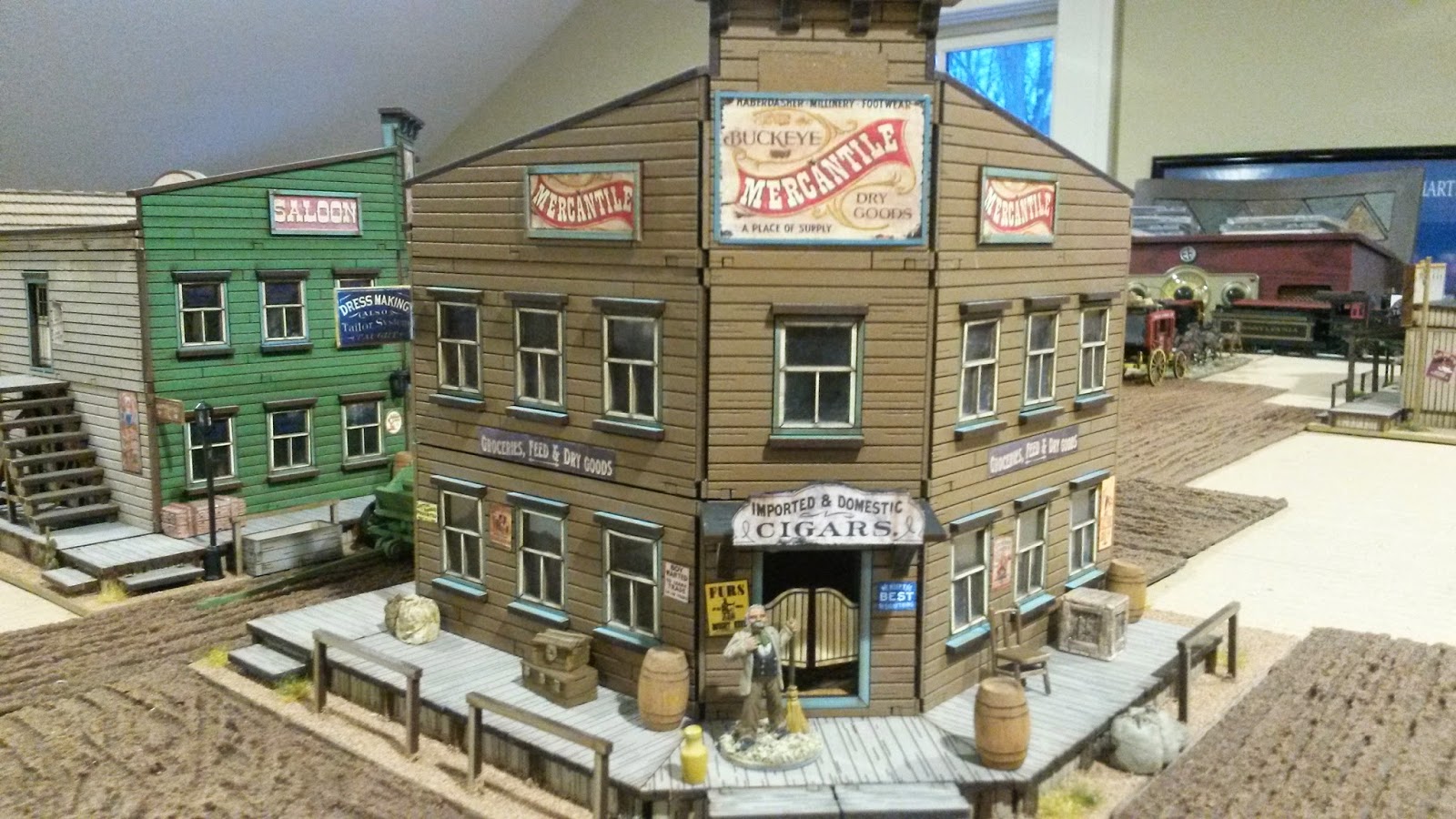 Next up is Buckeye Mercantile - "A Place Of Supply". I had bounced back and forth about having a General Store, Dry Goods Store, or something similar for a while. Mostly because I couldn't find a sign that I liked. Then I found the Buckeye Mercantile sign and I knew I'd found my next business! 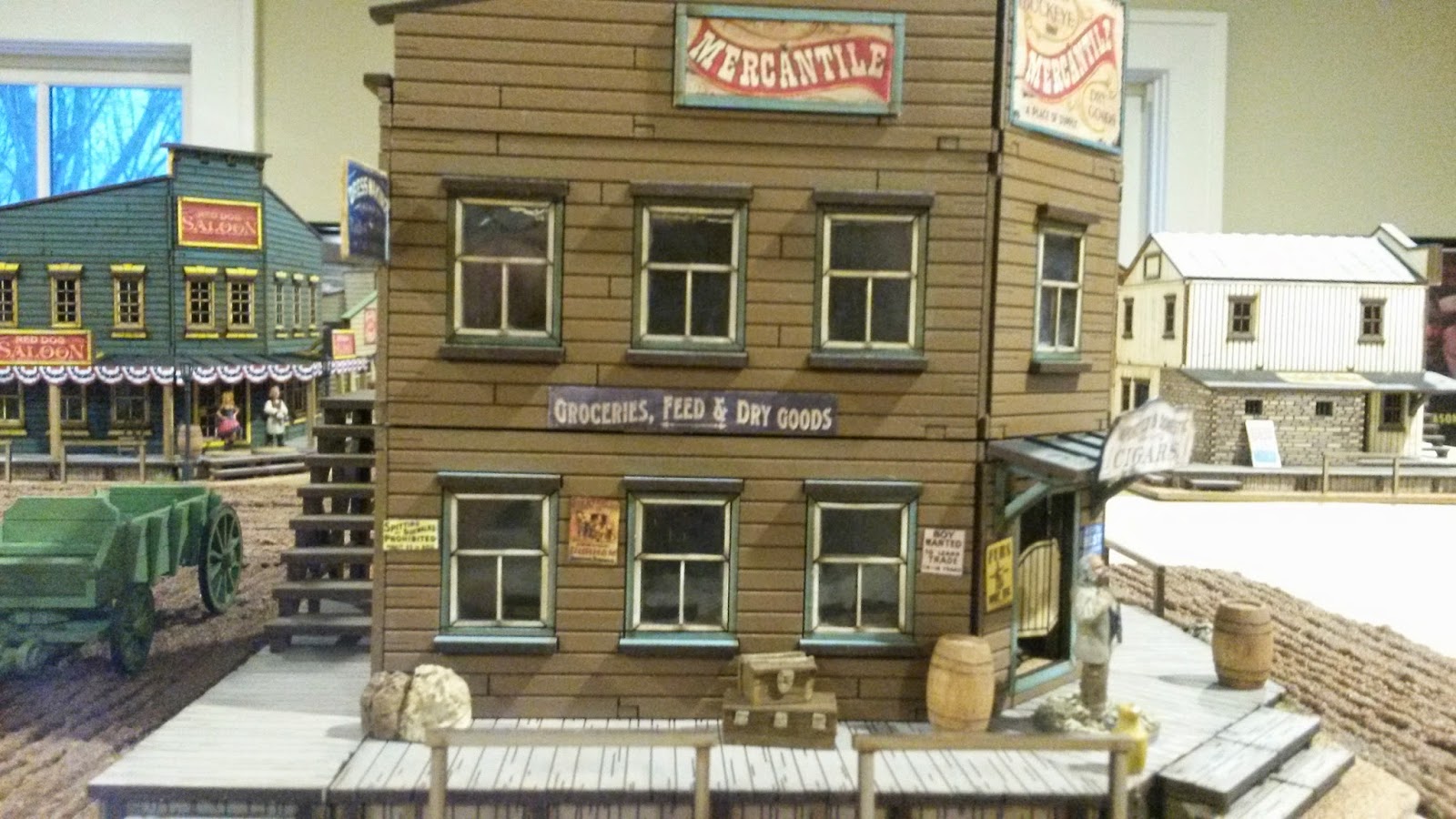 I added a cigar sign above the front door, which if I could change I absolutely would. A normal door would have been much better for this type of business - perhaps a future 4Ground add-on pack could provide different options for front doors. 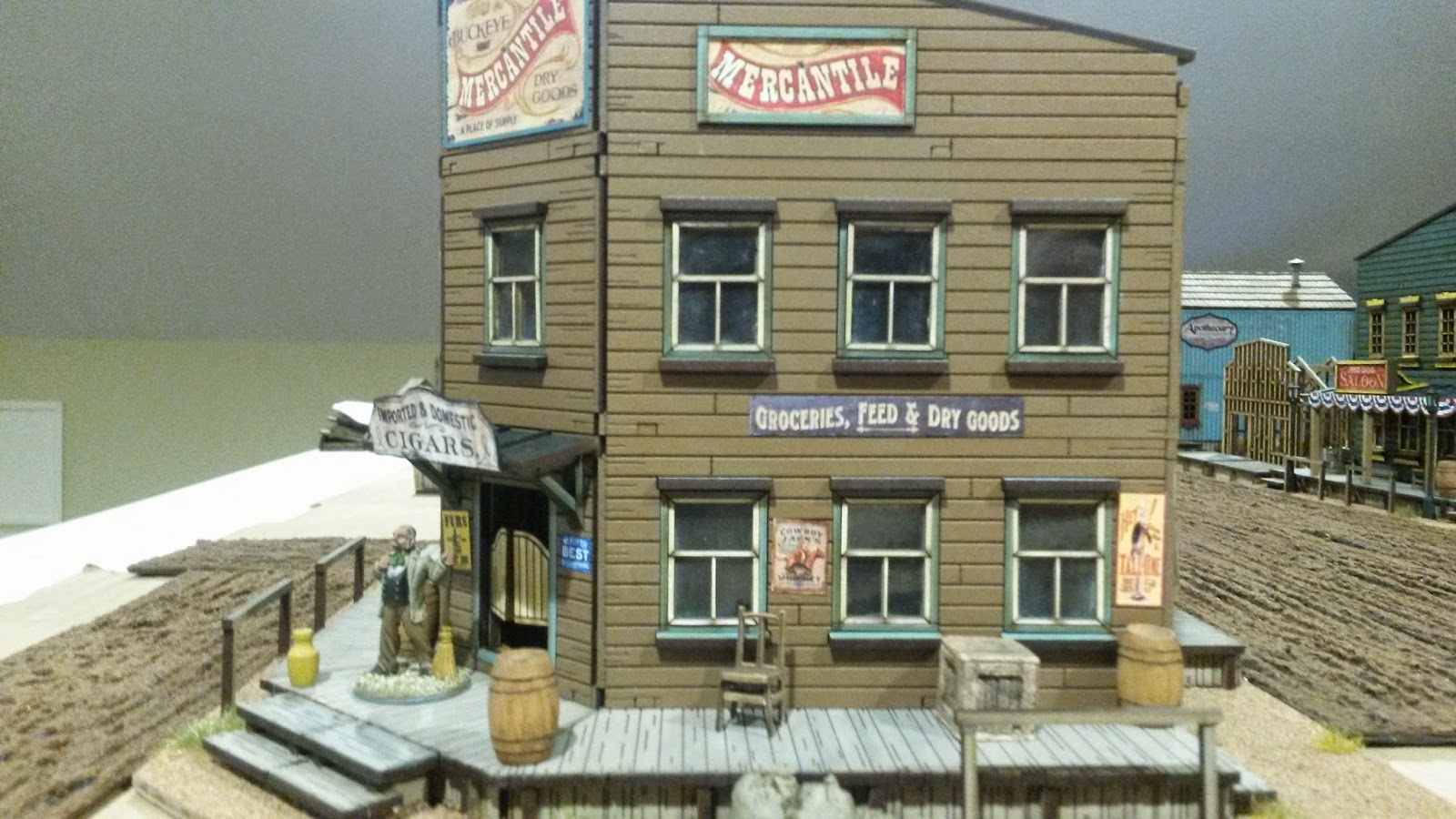 I added "grocery, feed, and dry goods" signs to both sides of the front of the building, though I now feel I should have put them on a backing to make them stand out a bit more than just gluing them directly on the wall like I did. 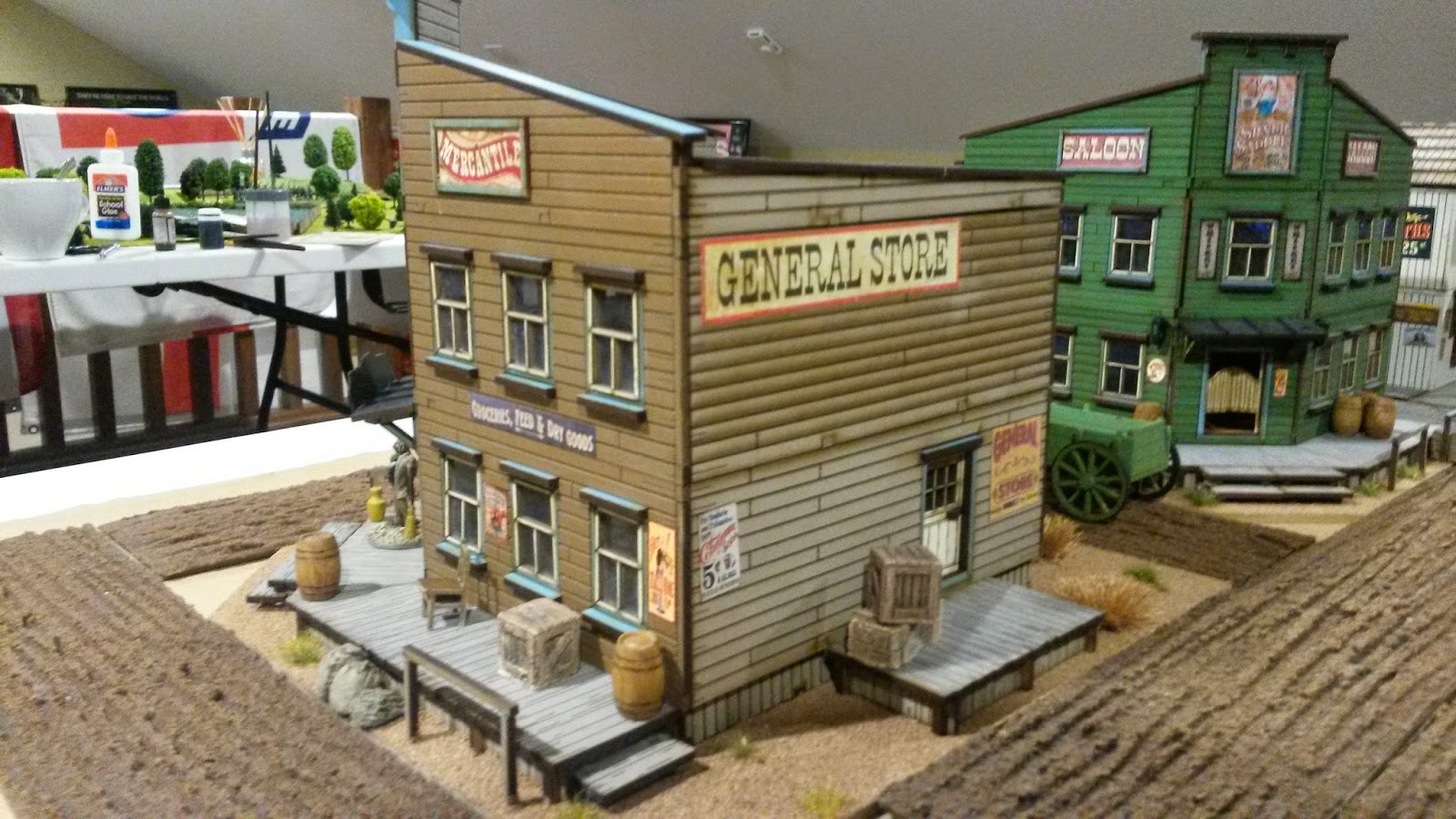 This was also the first building I did where I used the old figure blisters plastic for the windows. 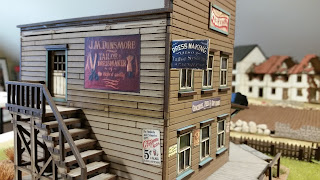 In what will become pretty standard for me, I placed another business on the second floor. This one is J.M. Dunsmore Tailor & Dressmaker. I like to place another business in all my two story buildings because it gives me more opportunity to create that narrative I talked about in my first post. Plus it usually allows me to create a cool side sign! 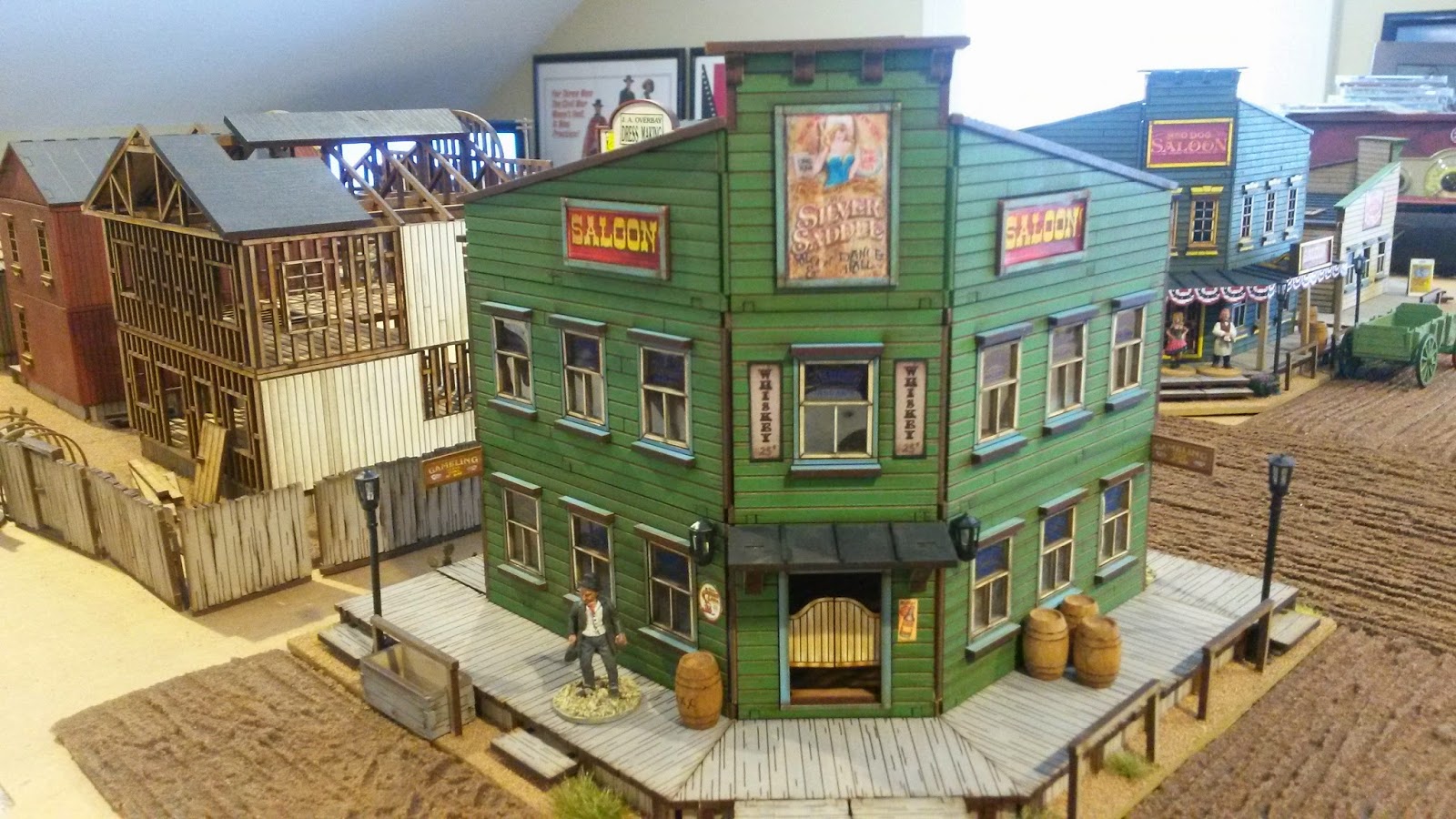 The last building is Rogan's Bar, renamed The Silver Saddle Saloon and Dance Hall. I was going to leave Rogan's as it was, but the more I thought about it, and the more I was coming across really cool saloon signs during my research, I felt I wanted to have something different. 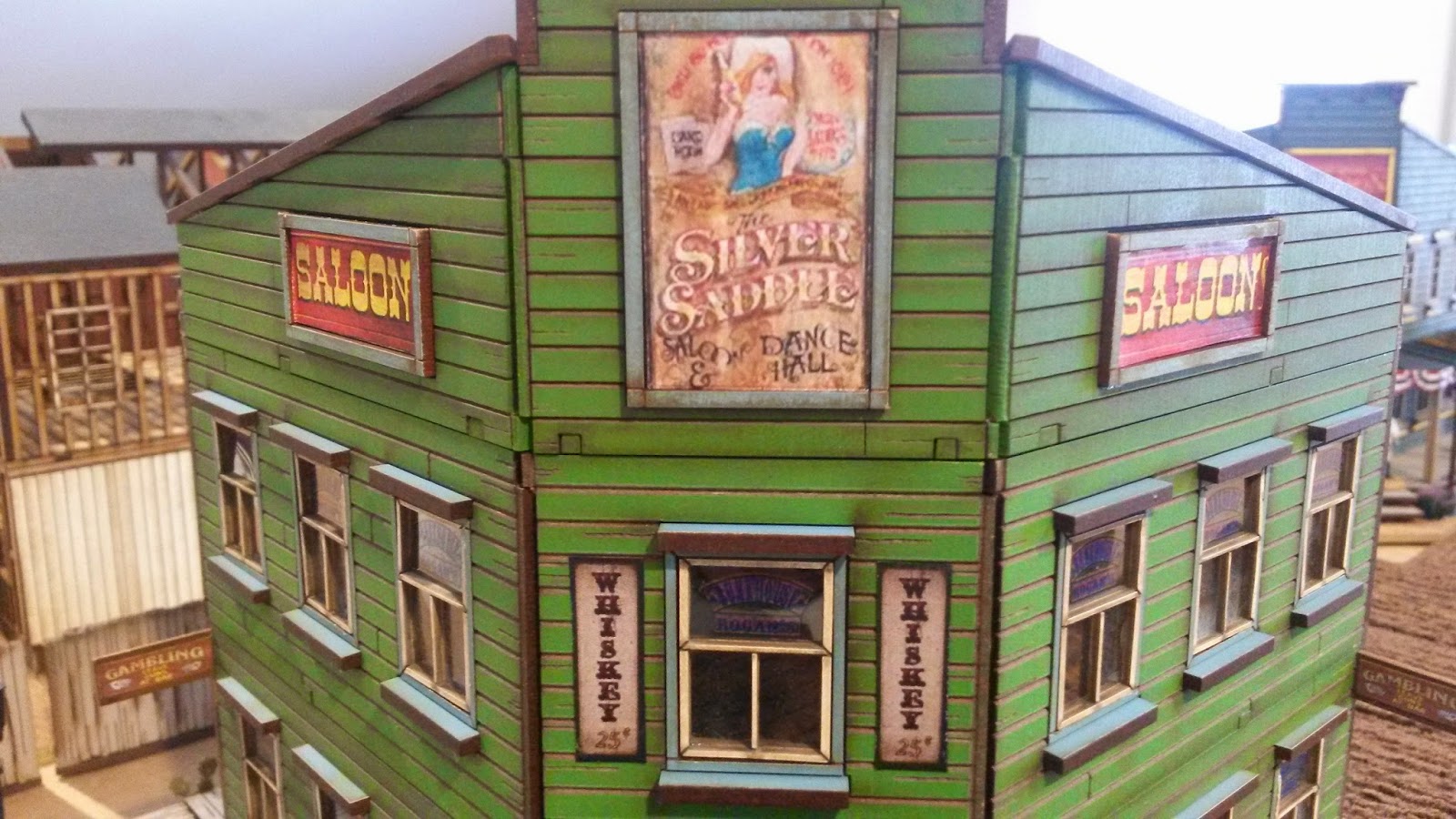 I added some generic "saloon" signs for the roof (since the photo was taken a darker wash was applied as I felt they were a bit too bright) and placed a couple of smaller Silver Saddle signs on the back of the building. 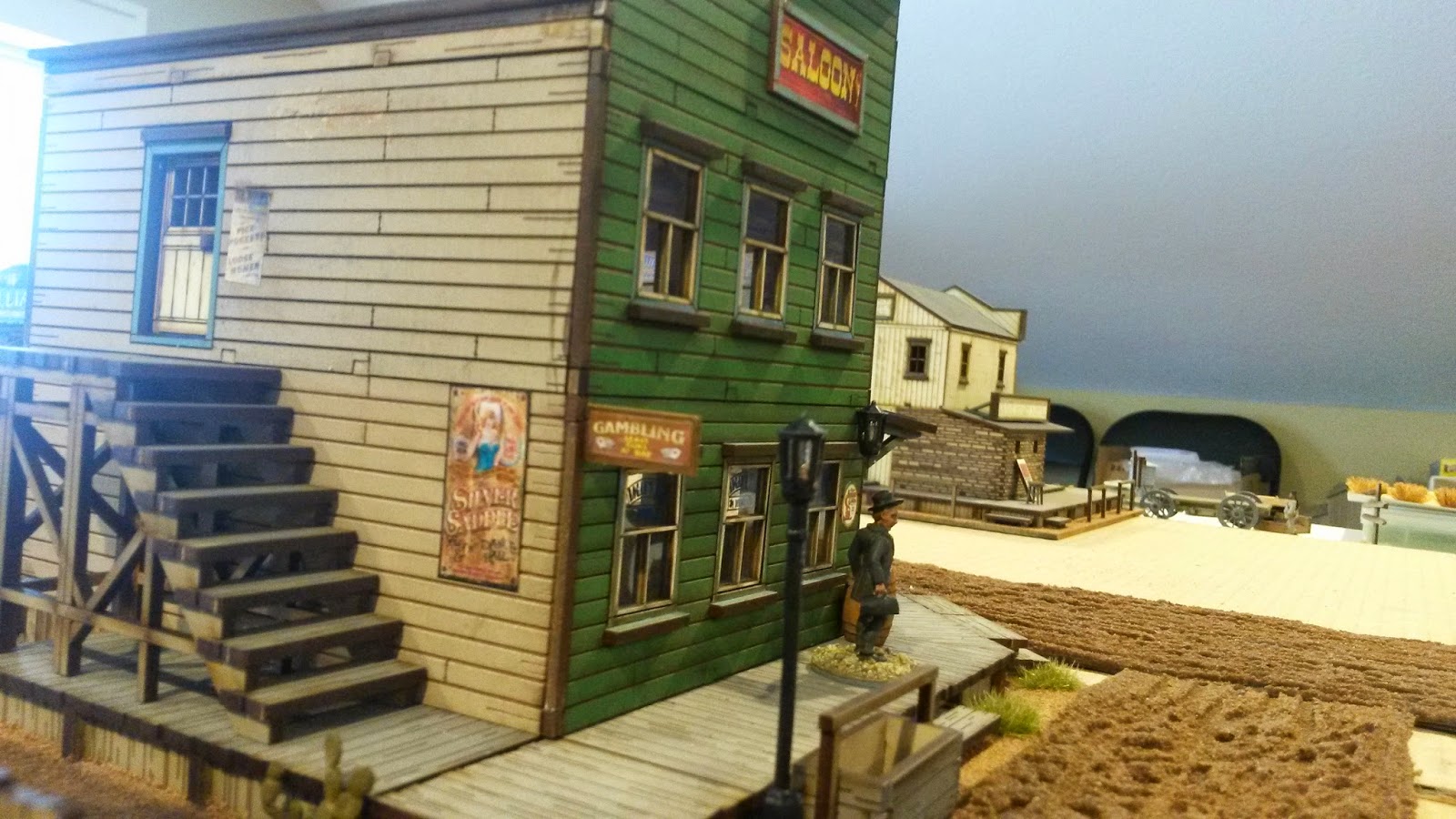 Two "whiskey" signs draw attention to the front. The connection points on the front of the building were painted over with matching 4Ground base paints. Another one of the more "classy" establishments, the Silver Saddle has some lamp posts outside its boardwalks. 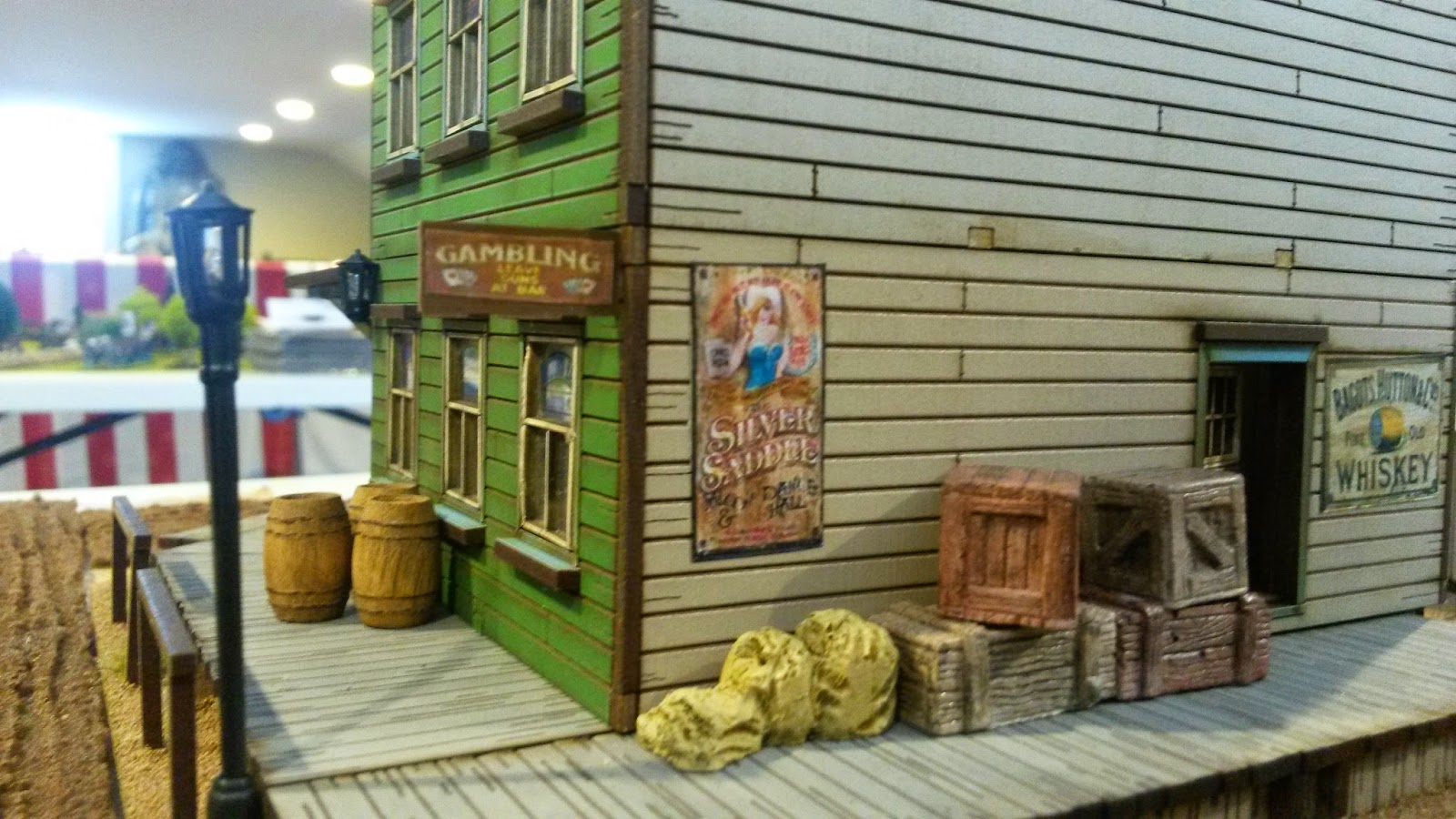 They are HO scale model train lamps I got on Ebay through an overseas seller. I think I got like 50 for around 10 dollars. I cut the wires off and sprayed them with Testors Dull Coat and they were ready to go. 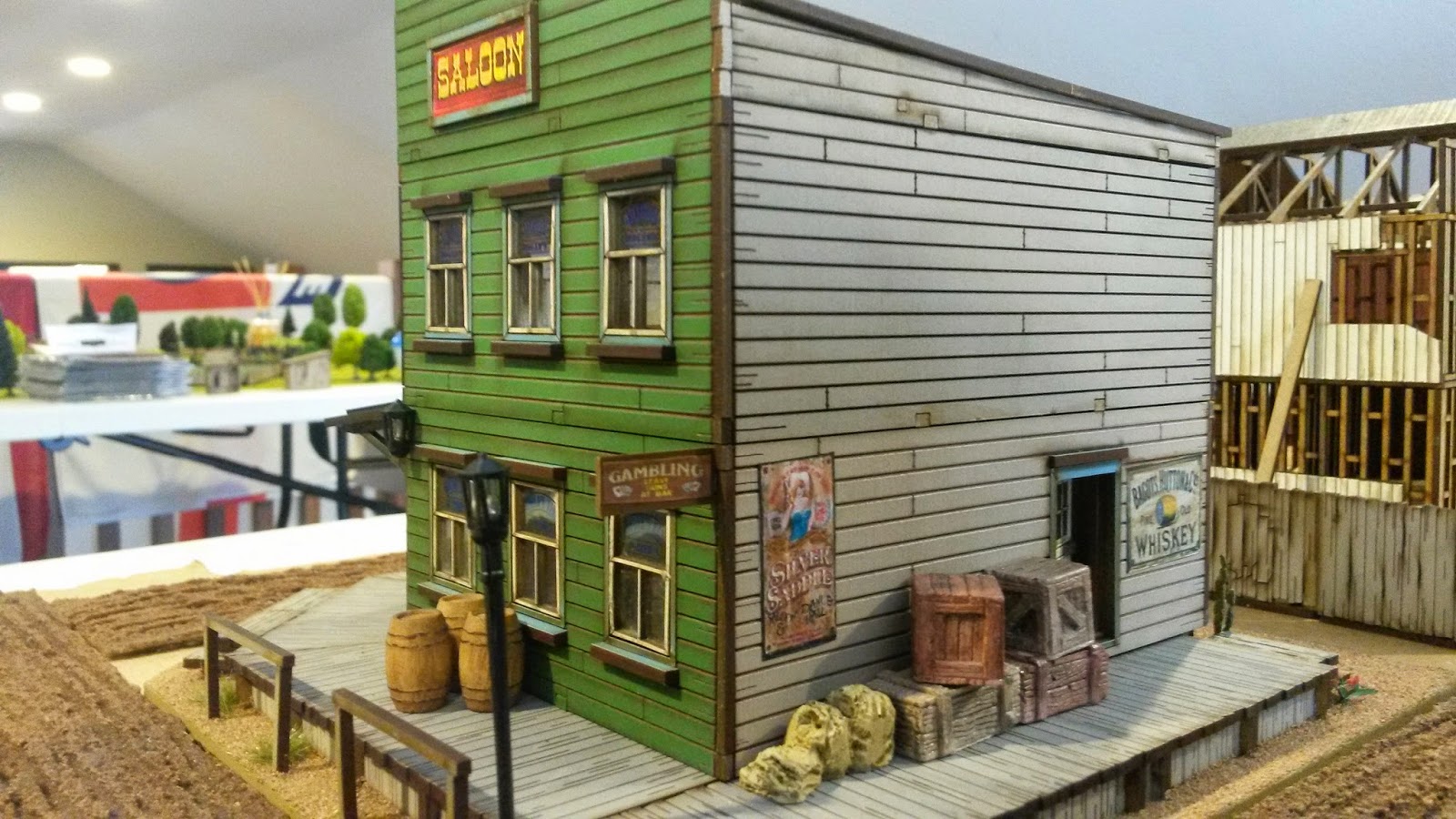 Again, something small and simple like that adds a lot to the narrative. A couple of small "gambling" signs on both ends of the buildings add to that as well.

That's pretty much it. As always, thanks for having a look and more feature buildings to come!
Ivor