The Chicago Way - Unboxing Box One

I was ecstatic to open the mail box to find the first of my two packages from Great Escape Games yesterday afternoon. The second box with all the new 4Ground buildings hopefully will be following soon! 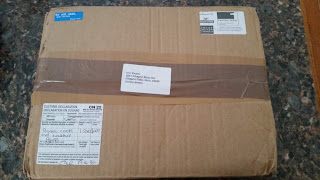 This first box had the rules to The Chicago Way, the tokens, driving template, three gangs, and a couple of bits and bobs - some decals for my Bolt Action vehicles and one package of 4Grounds corrugated iron roofing material (though I definitely should have bought a couple more). Everything was packed nice and secure with plenty of bubble wrap. 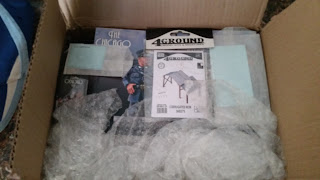 When I started to go through the box to check everything out, I panicked a bit and thought GEG had forgot to ship my gang of Gangsters as I only saw boxes of figures for the Police and Prohibition Agents. Everything was there though; the Gangsters just didn’t have a box like the other two, they were in a bubble wrap bag. 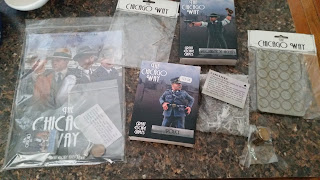 The boxes the figures are in are smaller than the boxes the figures for Dead Man's Hand come in - those are old multi disc DVD cases repurposed. I like the smaller boxes better, though I did have a time and a half getting into them! I wasn't exactly sure where they were supposed to be opened at. I didn't want to tear or cut into the cool box art, and ended up going in through the bottom; though I'm not sure that was right as I had still had to tear it open. It was too bad the Gangsters didn't have a box because I am super impressed with layout, photos, and design on the other two boxes. 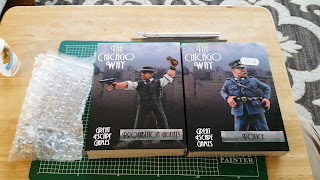 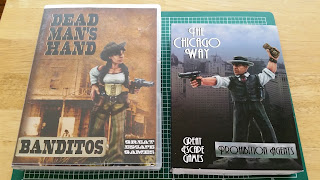 I decide to prep the figures before getting into the rule book - I have a maintenance appointment for my car scheduled tomorrow morning so I figured I'd use that time while waiting to go through the rules and probably write up another post on my thoughts on them. You get seven figures in each box, with each figure modeled with different weapons. Let me just say very quickly that I had a box of Blue Moon's Gangland figures, box one, the named gangsters, that totally went Keyser Soze on me - poof, gone. It was there sitting on the floor next to the painting desk when I was finishing up my Bolt Action Germans a few weeks ago. I had set it there because I knew I wanted to get a jump ahead on TCW with these figures, and then they just completely vanished into thin air. Madness! Anyway... 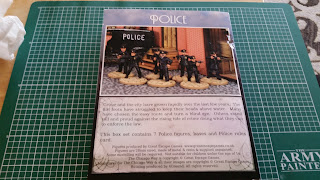 First up were the Police gang. Really nice sculpts on all the figures and there was very minimal mold lines to clean up. Of course the thing that will stick out with this gang is the lack of variety when painting, but that is to be expected with a uniformed gang. Still a great looking group of figures and probably will be the first ones I paint because they should be the easiest! The big question will be to base them in the traditional way, or go with clear bases which seems to be a popular choice for Pulp era figures right now. I may end up going traditional only because I don't think I have enough clear bases to cover all three boxes of figures. 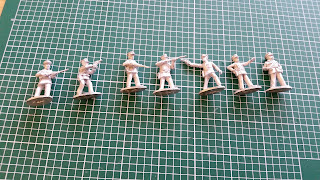 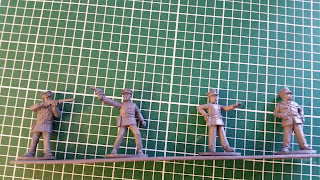 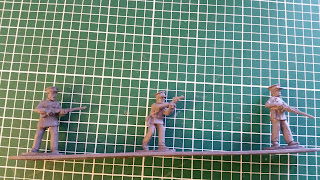 Next up was the Prohibition Agents. Half of these figures are modeled straight after characters from the movie 'The Untouchables' and they look fantastic! You've got Eliot Ness (Kevin Costner), James Malone (Sean Connery), George Stone (Andy Garcia), and even Oscar Wallace with his trade mark glasses (Charles Martin Smith)!  Again, absolute minimal mold lines and clean up. 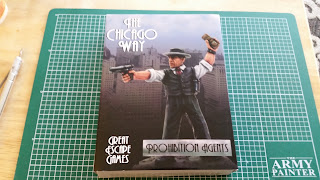 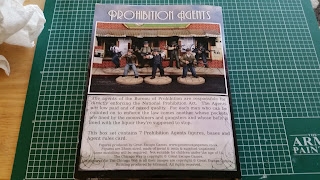 I know GEG design their figures after popular movie characters - the Dead Man's Hand line of figures followed that mold - so I'll have to dig a little deeper to figure out who the other three models are representations of. 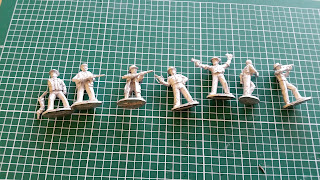 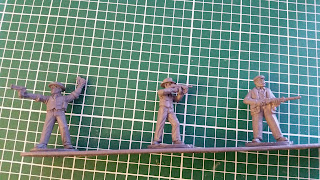 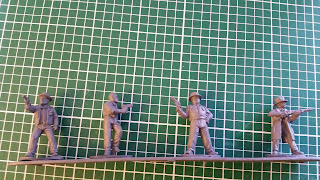 The Gangsters were next up on the prep board. Again, a little disappointed they didn't have a box, but if waiting for a box would have delayed shipping, good on GEG for shipping them out anyway! I'm just glad I have them in hand. 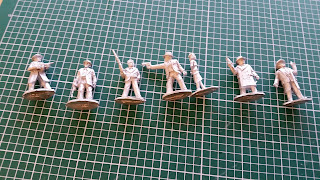 Unfortunately this group did have a couple of issues with some mold lines and casting, but again minimal and expected with metal figures. One figure had some mold lines around the neck line of his coat that were visible right away. A small file took care of that though, so no real issue. 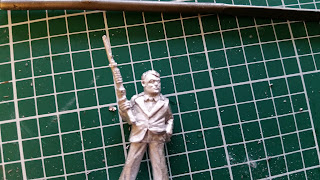 The only female figure of the group had an issue with her left leg. The way the cast was it made her leg bend to the inside, making it look like she'd had an accident causing her leg to not be straight! I cut the foot off from the base and then just straightened it out. Looking through the rule book you can see several photos of this figure and the same issue is on that one, so maybe that wasn't a casting issue. Anyway, I straightened my figures leg, and it was an easy fix. One thing you don't realize from the promotional photos that are out there, is that she is hiding a gun behind her back! 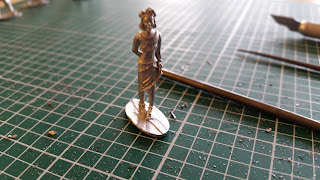 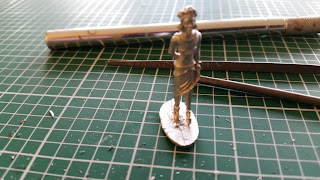 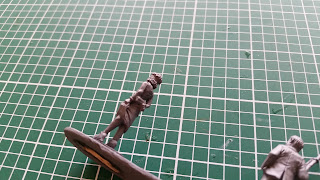 These guys will be the ones I am looking forward to painting the most! Again, like the Prohibition Agents, you've got several figures modeled after characters from 'The Untouchables' movie. You have Al Capone (Robert De Niro), Frank Nitti (Billy Drago), and then a couple of gun hands that look like they were molded after either the hotel lobby confrontation scene with Ness or the train station scene. Really looking forward to painting some white spats on these guys and the Nitti figure especially! The thing that does strike me about the Capone figure (modeled after the lobby confrontation scene and it looks fantastic) is there is no weapon modeled, so I guess that'll have to be something that we will have to proxy. 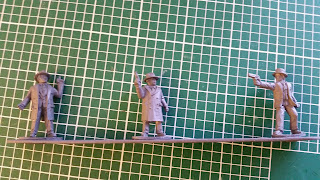 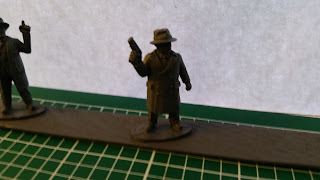 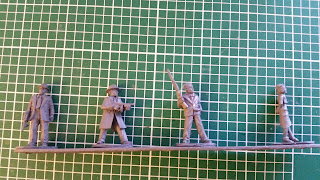 If you pre-ordered the rule book you received an exclusive figure for free, The Photographer. Civilians have special rules in TCW, so he came with a card explaining his. Which ever side has control of the Photographer (I'll go into more detail on how that happens in the rules overview post) is allowed to move him up to 6 inches and then take a photograph, this allows one as yet activated friendly model to re-roll one dice roll that turn. Kind of neat little addition and I'm definitely looking forward to more stuff like this! 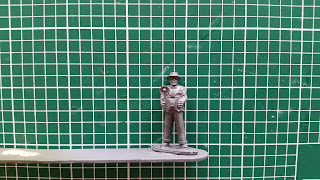 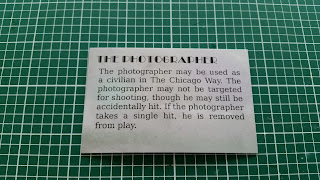 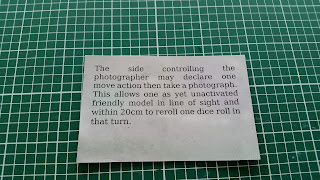 I also picked up the driving template made by 4Ground. It's a clear plastic template with the writing etched in. Even under a black background it's kind of hard to read the writing, so it would have been nice if that was colored somehow. You can see that there are two types of turns, a hard turn and a gentle turn, that each have corresponding modifiers. 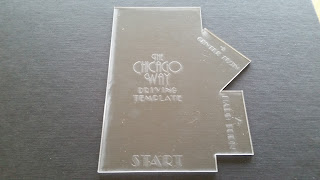 I did take a quick look at the cards, and they are the same size as the DMH cards, except with the rounded edges. The 2-10 TCW common cards abilities are the exact same as the DMH 2-10 common card abilities; the number 2 card for example is an 'out of ammo' for both games. 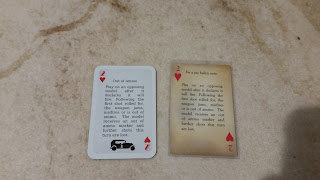 The last thing I picked up was a set of tokens. Again, these are identical to the DMH tokens except for the six vehicle tokens. Not having read the rules yet, my guess is each token represents movement, just like the footsteps do. So a '3' tire mark probably represents 3 moves totaling 18 inches, modifiers would apply just like foot movement when shooting at a vehicle. 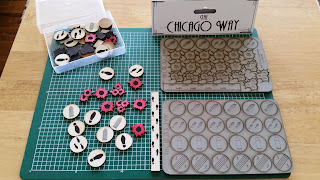 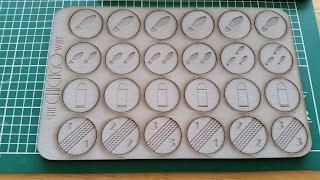 Well, I think that pretty much sums up what I got in the box, super excited to play this game! The rules overview post is on its way, stay tuned!