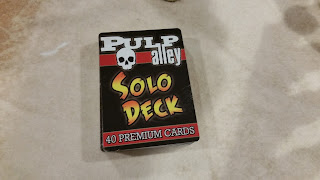 One of the biggest hurdles I have as a tabletop gamer is that I don't have a gaming group or friends that can get together on a regular basis - I can't even convince my son to roll some dice despite the endless choices of games I have available.  Up to now I've only had my good mate Steve (friends from way back as kids, when we were doing our own versions of tabletop and RPG gaming, in addition to having full heads of hair then) over to the house to play. When we have been able to get a game in it's been brilliant, and I think everyone has had a good time, it's just that it doesn't happen on any kind of regular basis. Which is a real bummer, because I have no greater joy than sharing all the cool toys I have. So for those blogs I follow and always seem to mention in the comments how I'm jealous of your gaming groups and how much I wish I was closer to you guys, you have no idea how much truth is in those words!!!! 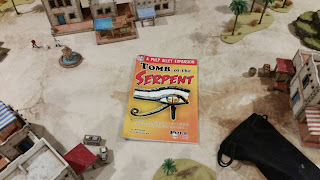 So when I saw and heard about Pulp Alley's Solo Deck, which allows you to play a full game of Pulp Alley by yourself, I was very intrigued. After reading reviews and AAR's on the LAF I was sold, so purchase the Solo Deck I did. As well as the new Tomb of the Serpent expansion set. 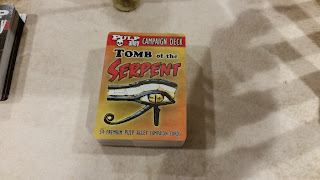 Can't just buy one thing, right? I mean, I'm already paying for shipping, right?! Well, I thought the Horror Deck would be a good purchase to go along with the whole "tomb" like scenario's, and I've heard nothing but good things about it. 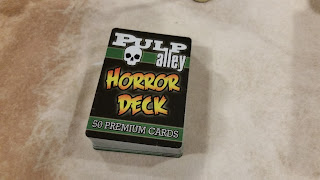 I also figured I should pick up the blast templates. 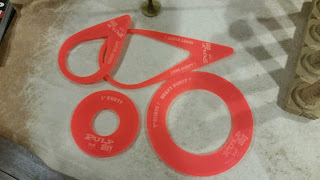 Here's what I absolutely love about Dave and Mila at Pulp Alley - it's these little things that really show how much he appreciates your interest in the game. I can't think of any game designer who even comes close to the interaction Dave has with his customers and players. The Pulp forum on The Lead Adventure Forum should really just be re-named "Pulp Alley" because 90% of the posts are Pulp Alley related - and Dave is always there giving thanks, advice, and answering questions! Without question it's one of the things that initially drew me to Pulp Alley. So big hats off and thanks to Phipps and Daughter :) 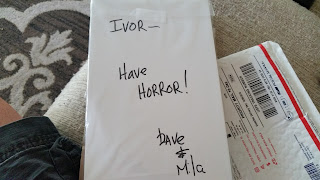 So, one of the big goals for 2017 - get cracking on the solo version of Pulp Alley!