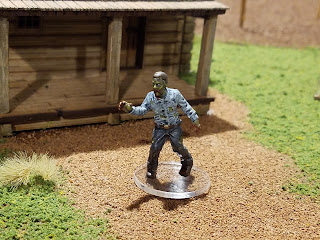 I'll be honest, I didn't think I'd get anything done this week. One fully painted figure is going to be considered a major victory in my eyes! And I'm actually super happy with the results. 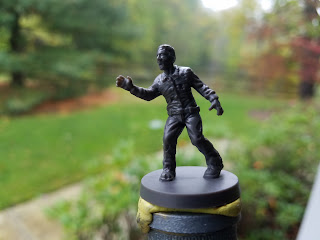 I decided not to even attempt anymore of the Wargames Factory zombies (I do have an idea for them though, so at least they won't get tossed - stay tuned) so I grabbed one of the Mantic zombies from the Woodbury expansion set to try to paint up. 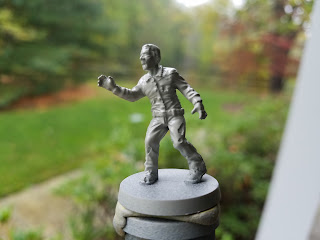 I primed him light gray, and that's when I saw a strange mold line that ran from his left should across to his right arm pit, I completely missed it when I initially took him out of the box. I say strange because of where it's at, usually your mold lines are along the side of a figure, not diagonally across the top of the chest, very odd. 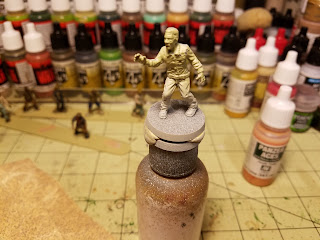 So I took a file to get rid of it, and then sprayed some of the AP Necrotic spray paint lightly across the top of the figure. No need to spray the entire model really. Unfortunately though I didn't do a very good job on filing down that mold line as it popped back up when I painted the shirt. 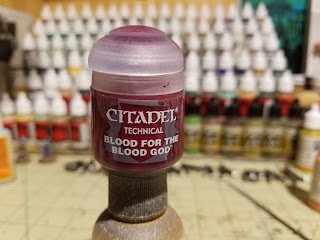 After watching a few painting videos on You Tube it became very clear to me that Citadel's 'Blood For The Blood God' (honestly, who makes up these Citadel paint names lol!) was what I needed to improve the, for lack of a better word, gore, of my zombies. So I ran up to a local shop and grabbed a bottle, and I have to say it is exactly what I was looking for. 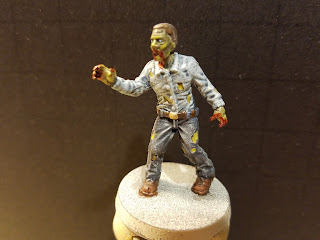 I was moving along pretty quickly so I didn't take any WIP photos! 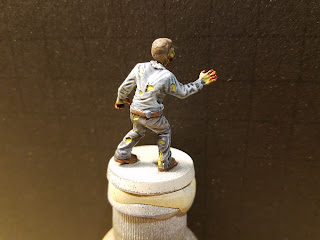 I did a few washes with Citadel's Nuln Oil on the skin areas, and Drakenhof Nightshade on the shirt. 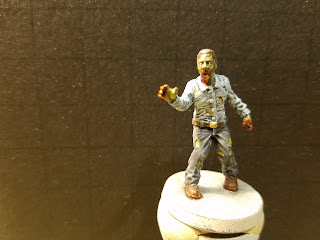 Agrax Earthshade was applied to the pants. And I did a dry brush with some Vallejo Stencil to bring out the high lighted areas of the entire model. 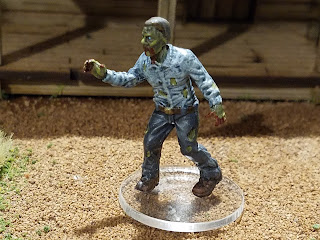 And a close up of the completed figure with his new clear base. One foot was pinned and then a hole drilled into the base to make the figure more secure - you can see a more detailed explanation of my pinning figures to bases at the bottom of this old post here 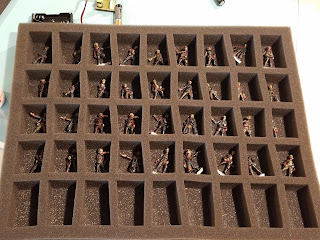 Even though I only painted one figure from beginning to end, I did finish some detail work and based all 36 of my West Wind German zombie soldiers. I'd had these done for a while now and they have just been sitting in a case. I was initially going to use them for Historicon back in July. 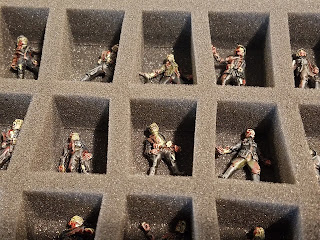 One of my early story ideas for the Agent Carter Historicon game was that once Peggy and the SSR found the entrance to Red Skull's hidden underground base they were going to come upon a failed experiment of German soldiers who had been turned into zombies and over run the entire facility. 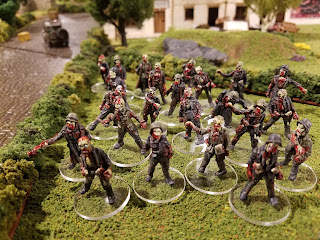 I had several ideas for the underground base/lab, but I thought what could be really fun was some 'Ultimate Soldier' experiments gone completely wrong. And as we all now know, time unfortunately didn't allow me to complete the underground base, but all the pieces and story are all still there, so completing these figures is a great way to get back to finishing part 3 of the Agent Carter game. 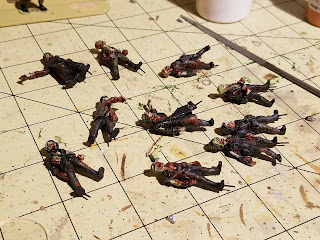 The figures were all pretty much ready to go, all I had to do was cut off the metal from the bottoms of their feet and get pins inserted into them for the clear bases. 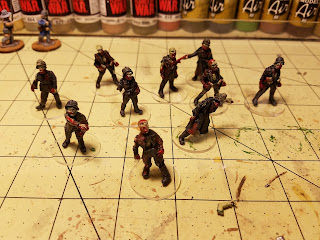 I added a few highlights, the new blood paint, and then finally used some Vallejo Sky Blue to dot some eyes onto all the figures. 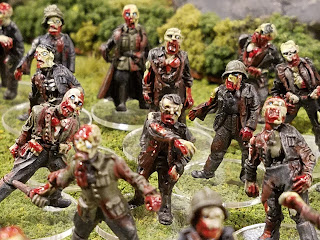 And a close up of the herd. Really happy with these as well! 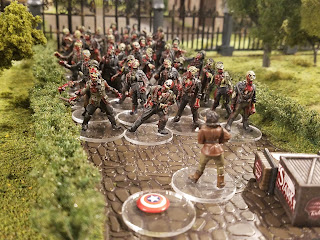 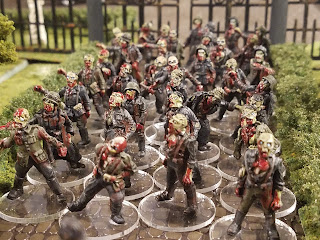 I mentioned in the beginning about thinking I wouldn't get anything done this week - we had a horse show which always creates extra work, I had to buy a new car which took two days to complete, but the big thing was I really thought Jakob would come home from school this weekend since he had an extra two days off. I figured he'd come home for 4 days and we could hang out and maybe even get up to the studio to roll some dice again, and even try out the Walking Dead - well, any thoughts that he may be homesick or is having trouble adjusting to life on his own at college were thrown out when he responded that he didn't want to come home because "...there would be nothing to do." !? Granted, he did say he had 4 projects he needed to continue to work on too, but gee whiz, gut punch! Kids, lol :)

Until next time, thanks for looking!
Ivor
Posted by Ivor Evans at 11:14 AM