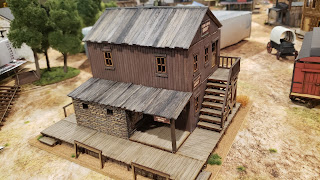 Apologies to everyone for the silence the last couple of months, I have been having major issues with my laptop and finally thought that I had it sorted a while ago but unfortunately did not - a new one looks like the realistic solution but the bank account says differently so we'll attempt to plug away using the mobile device 🤷‍♂️

I saw Dave Stone was having another hobby challenge with scenery so I decided to jump in and revisit some old 4Ground buildings of mine. 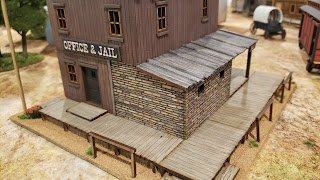 First up, I went back and re-worked the entire 4Ground Sheriff's Office. 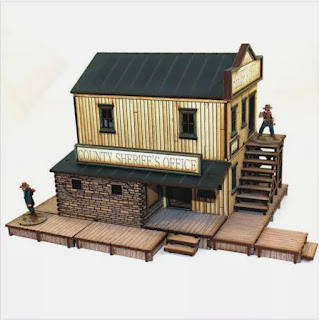 As you can see, it really changed quite a bit from what comes straight out of the box. 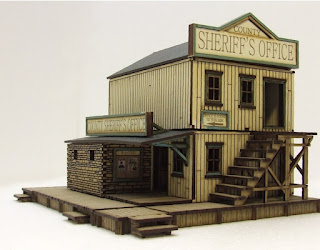 I think that's what I love most about the 4Ground stuff, is that you've got a great kit to start but have that ability to enhance it if you want.

To be honest I'm not completely happy with the colour of the walls, so I'm sure that will be another re-visit in the future. 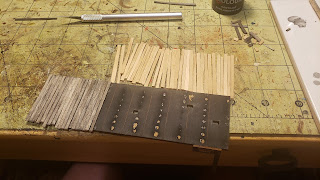 The roof and the overhang though I couldn't be happier with. I cut some old bass wood and stained them with some inks and I think I'll be trying this out on a couple other buildings as well. 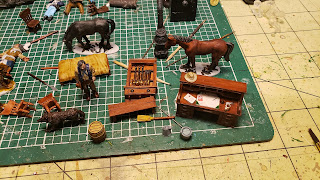 Knuckleduster have a really neat office set for your town sheriff so I painted that up to add a bit of fun to the interiors.

I've talked about this before, as we really begin to edge towards making a "dollhouse" with these types of additions, but for me I'm all about the little details and that's really what I think brings a table/game to life.

Here was my prisoner, axiously awaiting his breakout.

I added a lot of little details to the table, with newspapers, wanted posters and some coffee mugs.

If there was a miss I would say it's definitely the walls. I added a few pictures to break up the monotony but changing the brightness with a wash would have improved the look - though that is much more difficult with a model that has been built probably 8 years ago or so.

The sheriff with the jail key objective marker. The Knuckleduster set comes with this key so I threw it on a clear base so it can used in game and easily moved around as an objective.

This might be my favorite photo of the lot, a couple of deputies looking over the town after a game of checkers.
Until next time, thanks for looking!
Ivor
Posted by Ivor Evans at 7:51 AM

Email ThisBlogThis!Share to TwitterShare to FacebookShare to Pinterest
Labels: 4Ground