The James Gang and Younger Gang. Heroes or villain's, pretty interesting stories regardless of what side you fall on. Besides, who wouldn't want to have a game with a train or bank robbery with these masked characters as your main opponent! 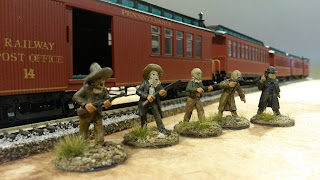 I found these figures on the Brigade Games web site. Lon Weiss, who runs Brigade, is a super nice guy and I've made many purchases from him over the years and always say "hi" at Historicon. Brigade also have a lot of really neat figures that no else makes - if you are into the Old West, namely the not "Deadwood" sets. I've got all of these as well and they are definitely high on my "to do list" here in the future. There is a great figure of Al Swearengen holding a cup of coffee that is just brilliant! 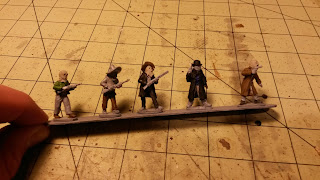 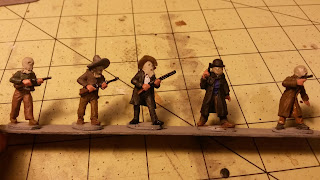 One thing I need to get better at is taking more WIP photos, so apologies to the 6MMRPC. I already had these guys primed and they had been sitting on the top shelf of the desk for too long. I had some time on Sunday so I was able to get them all painted and varnished. This morning I finished off the basing and got them sprayed with some Army Painter Anti-Shine. 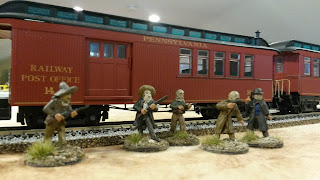 I primarily use Vallejo paints and that is what these figures have on them. I started to use cat litter for my bases and I really like it, plus is super cheap because I just steal some from the new bags that arrive from the grocery store! 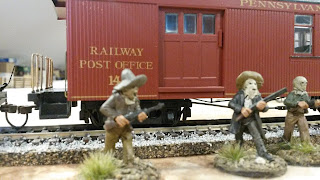 I also use Army painter tuffs. Recently these have gotten thrown to the back burner with a lot of blogs I follow, but I'm still a fan - mostly because of the wide variety of sizes each package gives. For me, I'd much rather have different sizes, from tiny to large, as opposed to only one size in the whole package. Another thing I do on all my figures is magnetize their bases. Both the base and magnet are from Litko. Definitely helps during transport. 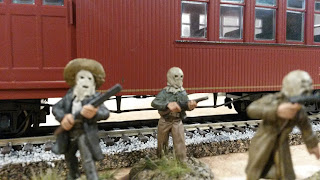 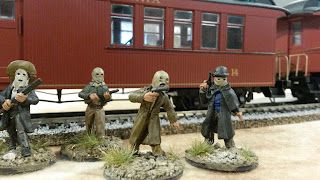 One thing I dropped the ball on was, and I realized this as I was doing my bases, I really should have went back into my existing figures and tried to match up the figures outfits as close as I could to these guys so I could basically have a "normal" figure and then one in "disguise" before I started to paint. Oh, well. Which also made me think why don't we have more multiple poses of one figure? Maybe four poses? Say, shooting, walking, running, wounded? Is that something skirmish players would be into? I know I certainly would, but clearly I already have a problem with buying figures, so maybe I'm the wrong person to ask. 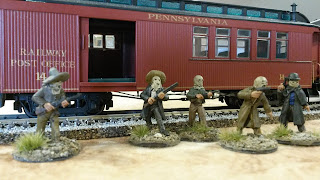