It's amazing how busy life gets, and how difficult it ends up being able to find time to update a blog. October was incredibly busy, and it was supposed to slow down a lot; or so I was told. Anyway, this is why it's been difficult to sit down in front of a computer.

The farm continues to change. About a month ago Number Six arrived. This put the barn at full capacity with six horses. When Number Six arrived he didn't have a name (well, that everyone liked anyway) and that's what I called him. It just stuck until we came up with his new name a week ago, which is now officially Coleridge. 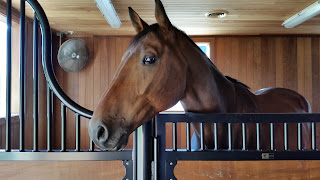 It's full on "No Vacancy" at River Edge Farm now. I'd also forgot we were gone a whole weekend as we took two of the horses to a clinic with a German trainer, Christophe Hess. My wife learned a lot and I brought back my new favorite saying from him "Zat iz ah feeling". I would just blurt it out randomly (and not so randomly). It's funny how quickly everyone here got tired of hearing me say that all day. 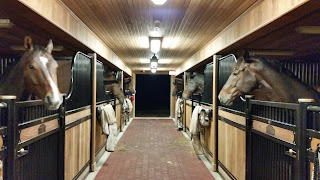 In addition to that, my wife said "Goodbye" to Zigzag, her first event horse. He was hurt a few years ago and just could never do what he used to. She donated him to Victory Gallop, a nonprofit organization that provides therapeutic and recreational horseback riding for children with behavioral and/or emotional challenges and life-threatening illnesses. http://victorygallop.org/ 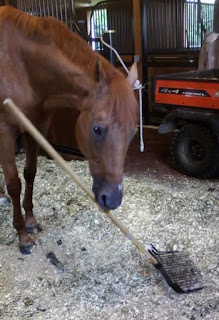 So that's pretty neat that he'll be off to help kids that need it. Z was pretty cool because he would actually clean his own stall! This picture was taken last summer.
With Z off to a new adventure, my wife is starting a new one as well; leaving in 3 days to fly over to Ireland to buy another horse to replace Zigzag. This is the part when I don't ever feel bad about buying miniatures and buildings - I wish I could fly over to England to buy some tabletop fodder! 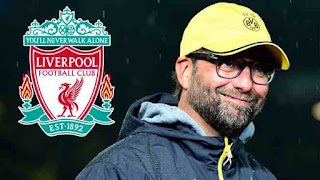 The other big thing that has kept me away from the studio is that fall soccer has started in full and I'm playing in three different leagues; the most for me in about five years. And five years later my body isn't really appreciating the extra work - despite my absolute love for the game. Three leagues means three different nights that I play. In addition, the "Normal One" has been brought to my beloved Liverpool to bring us back to glory! This guy is absolutely brilliant and I absolutely love his passion and sense of humor. It's good to be a Liverpool fan again. Klopp for the Kop! 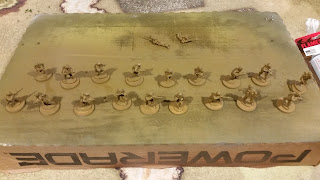 Now despite all the above, I have been getting up to the Studio a little. I started to work on a British Airborne army. I'm just fascinated by the paratrooper; in my opinion the greatest soldiers. And absolutely no disrespect to any others, just my humble opinion. Anyway, the Ox and Bucks on D-Day, that's what my goal is with this group. I've got 50 figures probably about 75-80% complete, so not too bad considering the past four weeks. This is actually an older photo (big surprise!), and the figures are much further along; really just the smocks with camo need completed as of today. 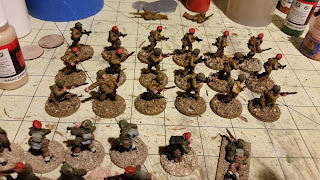 Jakob and I even managed to get another game of Bolt Action in. He absolutely murdered me on this new table I made; it wasn't even close and I had pretty much lost the game by turn 4! Regardless, it was still fun. Now I just want to try out the Red Devils. 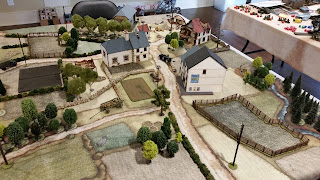