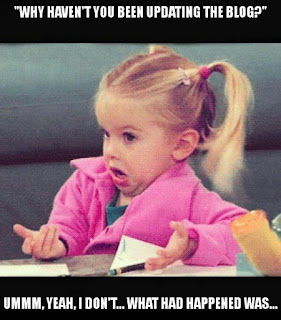 I'll just say it, I was awful at updating the blog the past, well really, three months (and even this one has been sitting in "edit" mode for days). The irony being that I was actually doing and getting hobby related stuff done. First I'd like to give a huge thanks to David at the Spiderweb of History blog for allowing me to participate in the 2nd 6MMRPC. It was great to see a group of people with similar interests and goals, and I really enjoyed seeing all the different figures and rules sets being used. Thank you to everyone involved there as well. There was a huge motivation NOT to be at the bottom of the updates blog, especially in the first three or so months, though I failed miserably near the end!

Just a quick rundown of what I completed for the 6MMRPC

35 Old West figures for Dead Man's Hand
17 Confederate Generals ACW
30 Irish Brigade figures ACW
5 Ghostbusters figures, including Slimer
5 Scooby Doo Gang figures
20 Zulu Warriors
45 Corner Kick figures - Liverpool, Manchester City, Arsenal
120 Bolt Action figures - 60 British Airborne and 60 Waffen SS (plus my US Airborne were based to 100%)
Built all my armor and vehicles for Bolt Action, 9 total
And I actually got the desk cleared of misc. figures (those that were half painted/not painted) and that was huge!

Overall, I'd give myself a "C" on what I accomplished. My big goal was to cut into the hundreds, actually it's got to be into the thousands, of American Civil War figures, and I completed 47. Awful. But, (and there always needs to be a "but") more importantly I finally got to play Bolt Action and Star Wars X-Wing. Both games I've been sitting on for years, and I made huge progress there. As of right now I don't have anything to build figure or vehicle wise for Bolt Action; lots to do to have them 100%, but everything I have can easily be on the table with no shame or "The Silver Surfer" status. 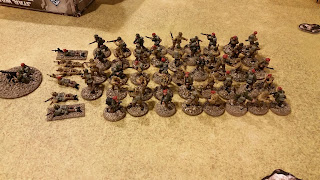 For the overall year I upgraded 15 4Ground Dead Man's Hand buildings and built 8 more. These are what I feel I'm best at, and hopefully can continue into 2016. 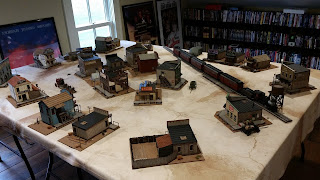 As mentioned above, the past month has seen Jakob and I finally get to play X-Wing. With the anticipation of "The Force Awakens" it was easy to get motivated to open those boxes and see what the "fuss" is all about. Wings of Glory in space. Disappointing it took me this long to play X-Wing. I really like how you can customize your ships through upgrades.

With X-Wing getting crossed off the "to play" list, that leaves Pulp Alley as my white whale for 2016. I will get Pulp Alley on the table this year!

So, overall, big picture anyway, I'm happy with what was accomplished in 2015, though the last quarter of the year didn't see much blog posting. There will always be more I can do, and the challenge is the huge ebbs and flows that occur - there seemed to be a feast or famine thing that consistently happened throughout the year. The good news is that the wife is leaving for her yearly two month training trip down south with the horses in less than three weeks, and historically that's when I'm always at my most productive and creative, hobby wise. So if the end of the month could get here that'd be great!

For the love of God, paint some ACW figures!
Get Pulp Alley on the table
2 blog posts a month
Paint British/Zulu figures - just one regiment of each would be great!
Paint British/Americans from my AWI box - again, just one regiment of each
Run a Dead Man's Hand game at Historicon 2016
6 AAR's - Bolt Action, DMH, X-Wing
Paint a French partisan army for Bolt Action
Sell all my Old Glory Wild West buildings, as well as other unwanted miniatures
Stretch goal is to "borrow" the new video camera (bought to record the horses at shows) and try to do a video AAR :) We'll see...

Thanks to anyone who has actually reads these things and an especially HUGE thank you to all those other blogs I follow and the others I have read throughout the year. It's truly amazing how much talent, creativity, and knowledge there is out there!