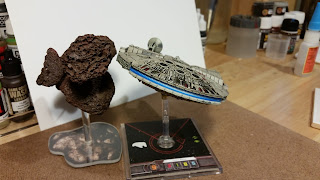 Still riding "The Force Awakens" Star Wars wave - where it was full on watching all the movies and cartoons daily, and listening to audio books on the Ipod while out in the barn -  I was playing around with using lava rocks as asteroids for our X-Wing table. A pretty easy project overall, that adds a great improvement visually to the game in my opinion. Above is the final product, with the Millennium Falcon on a magnetic gimbal that allows the ship to tilt in a more Star Wars spacey-like fashion. 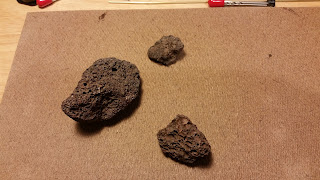 I started out with three lava rocks (though I ended up adding one more smaller rock in the end), looking for ones that I felt went together in my eye. The lava rocks were purchased from Home Depot. 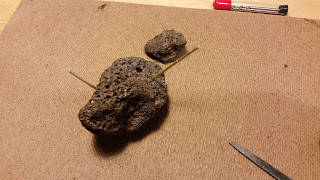 I then used my electric drill to drill holes in the main rock to take the brass rods (K&S Precision Metals #8125 round brass tube 1/16 x .014) I picked up at the hobby store. These are what is used to connect the smaller rocks to the main rock. I cut the rods at different lengths to give each rock a look of floating in its own space, and super glued them into place. 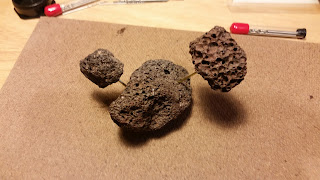 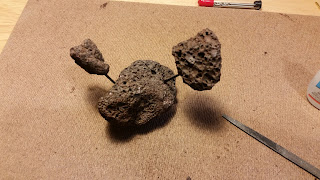 I then painted the brass rods black. 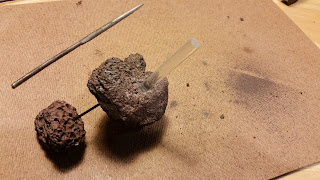 Next I cut a 6mm piece of plastic rod to about two and a half inches in length (I just eyeballed the height in relation to an X-Wing and a Tie Fighter) and drilled a hole for it into the bottom of the main rock. I super glued that into place as well. 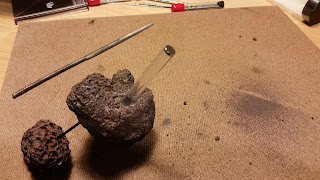 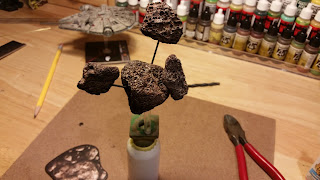 It was here that I decided to add one more small rock. 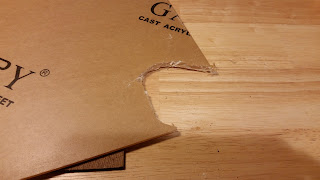 This was by far the most difficult part of the whole project; cutting the 1/8" Perspex. I started by tracing the basic shape of an asteroid from the core set (the cardboard ones) onto the Perspex, and then made my attempt to cut the shape out. I ended up using two different hand saws to get the basic shape cut out and ended up finishing it off by using my dremel to match the original shape of the cardboard asteroid. Bottom line, it was extremely difficult and very frustrating, but ended up working out in the end. I just received in the mail today a jewelers saw that I ordered off Ebay and did a small test cut on the Perspex and I think this new saw is going to make a huge difference going forward. 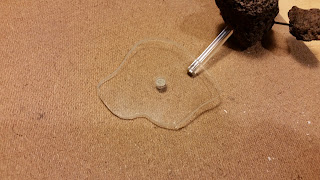 I drilled a hole into the center of the Perspex cutout and super glued another 6mm magnet into that hole. Now the two parts can connect to each other. 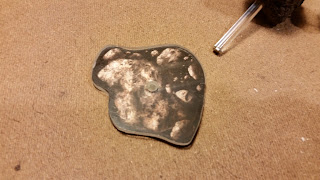 Here is the Perspex glued onto the cardboard asteroid. 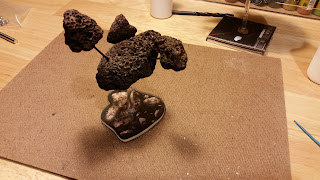 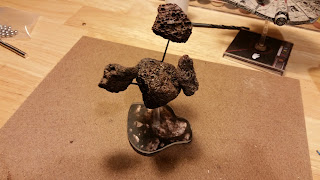 And the final product from two different angles with the magnets connecting the two parts together. I did a very minimal amount of dry brushing on the rocks as they really look the part right out of the bag. The key with the magnets is that it allows the lava rock asteroids to be pulled out for the sake of gameplay while still leaving the cardboard asteroid on the table for reference. 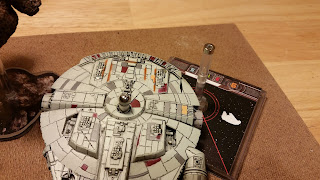 Here is just a quick photo of the underside of the Falcon with the ball magnet and the gimbal magnet (I haven't weathered the Falcon's underside, what a difference from the topside!). 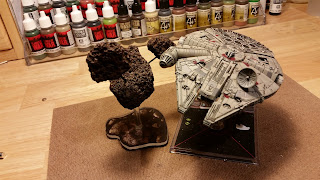