Lots of work done on the manor board and I'd say I'm probably at about 70% or so complete on what I want done, so pretty happy overall. But that happiness quickly ended as you'll see way down at the bottom lol! 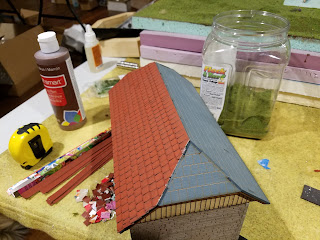 I began the daunting task of putting shingles on to the roofs of the buildings. Pretty easy overall, just time consuming - though the main houses do have some interesting angles that could pose some difficulty. 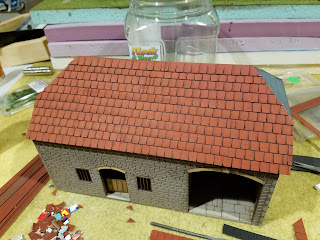 Here is an image of what I talked about in the last post about those sharp edges to the raised parts of the board. I'll be sure not to make that same mistake on future boards. 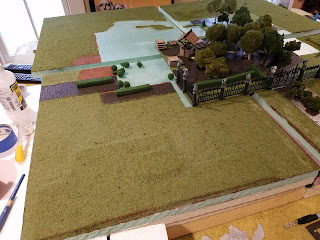 Again though, some creativity with tufts and foliage thankfully made those edges unrecognizable as you can see below. 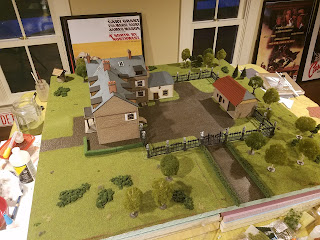 An early mock up with trees and some bushes. 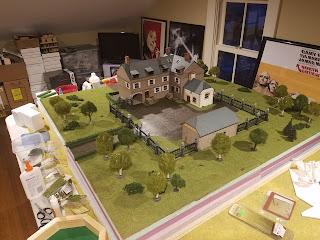 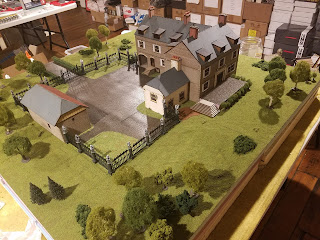 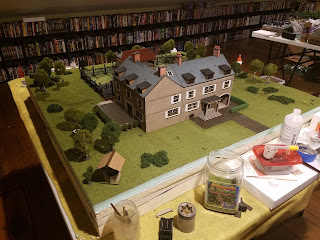 Magnets were added to all the trees for ease of play as well as transportation. 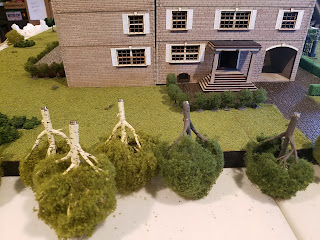 Another little narrative piece I added to the board were all these air vents. 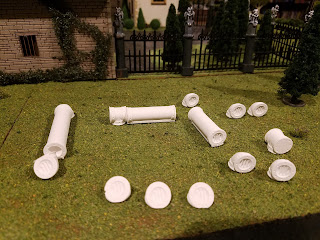 I placed these around the manor to represent the vents coming from the underground facility. 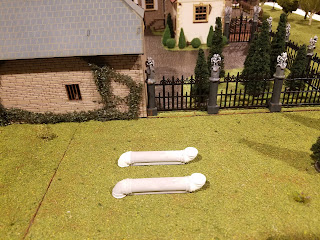 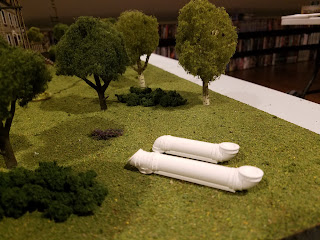 Someone looking at the board, not knowing that there is another part to it, would probably ask "why are there air vents there?" - so it just adds a little bit to mystery :) 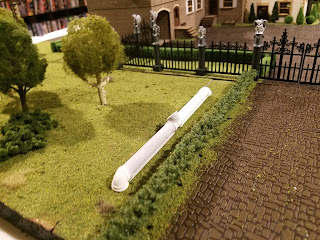 Priming and painting of all the vents is happening as this is being written! 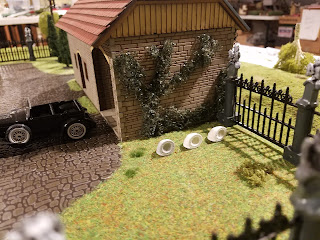 A quick image of the edges of the foam painted black; which really makes the board pop. 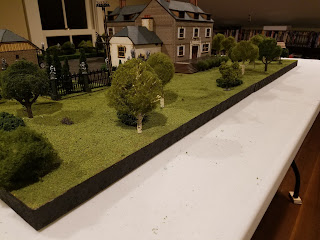 As mentioned in the previous post, I really wanted to do something different with this entrance of the manor. So a patio was created out of pink foam. I just threw up some 4Ground fencing to see what it looked like - I think it might be ok, the bases will definitely need to come off though if I decide to use them, so we'll see. But I definitely like how it looks so far. 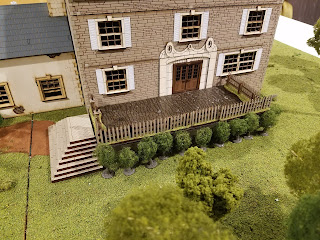 Just to give the carriage house a bit more flavor I added ivy vines around the walls. 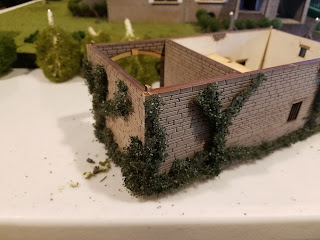 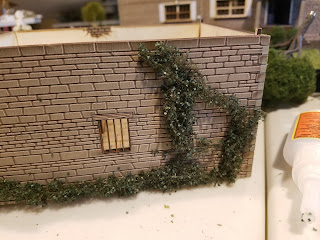 Really pleased with the results. 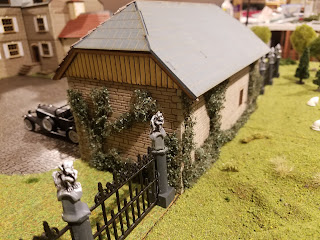 I found these really neat bushes from JTT Scenery, so they are going to go around the cookhouse. 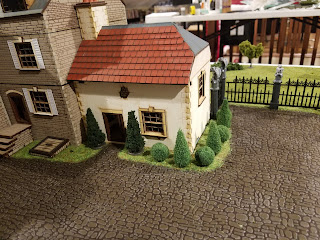 And these are from Woodland Scenics - these are also the bushes that are around the new patio in the photo above. The bases will all come off of them and be inserted directly into the foam - that will really improve the look. 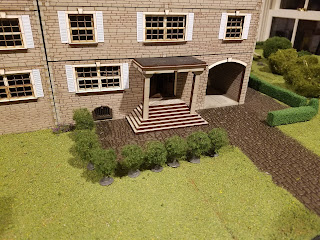 I also threw some of the 4Ground telephone poles on the board just to see how they looked. I think I can use them as possible objectives - cutting the phone lines kind of thing. 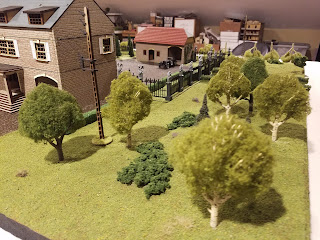 I found some wood in the barn and cut it to size so I could use it to create a "box" for the foam squares to sit on. This will give me that elevation I'm looking for, so visually you can see that manor is higher above the facility, showing that it is underneath it. 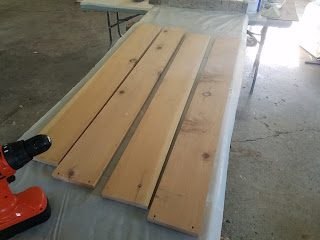 Just like the sides of the foam I painted the sides black so that will give the board a nice finished look. 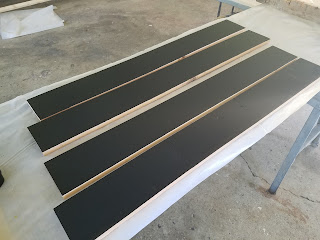 And now a couple of things not board related. Here's where I personally fall into the gaming trap - I have a ton of tabletop miniatures, figures, terrain, rules, etc. anyone who's read the blog knows that. Generally, I don't go crazy and buy stuff when it's newly released, it's the second hand sales and clearance racks that kill me. Case in point below. How could I possibly pass up both the main rulebook for Black Powder and the AWI supplement "Rebellion" for only $20.00!!?? So now I need to find bargains on the ACW and Zulu supplements :) 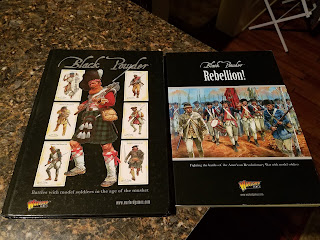 Now, as stated above, generally I don't buy stuff right at release... unless it's a 28mm German submarine! This is from Empress Miniatures and when I saw the preview photos I had to pre-order it. So here it is :) I'd love to be able to put it in the underground part of the Hydra facility for Historicon, but I just have way too many other things to tackle first. 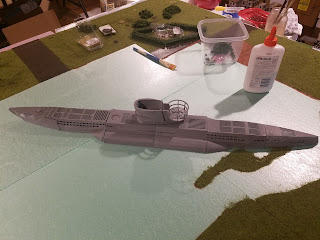 And finally, would you believe I looked on the Warlord Games Facebook page just this very morning and they are sneak peaking a new figure - clearly that's Agent Carter. Just unbelievable!!! I spent a ton of time searching for proxies for Carter, even attempted conversions and then I see this - I'm not sure if I should be infuriated or ecstatic LOL! 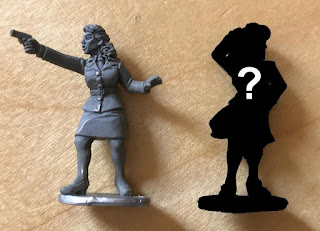 As hinted in that first paragraph, I think the real thing that hit me early in the week is the fact that we're just over 8 weeks away from Historicon and up to this point, any real work involving more than an hour or two has been done on the weekends. So, looking ahead at the next 8 weekends I have mothers day, Jakob's graduation, Jakob's 18th birthday, father's day, Therese's sister and her family are coming in from Chile (not Chile, Wisconsin mind you, Chile on the west coast of South America Chile), and Jakob's graduation party has to be planned. I'm sure I'm forgetting something too. So am I in panic mode? Yeah, I'm in panic mode!!

Until next time, I'll be the guy breathing into the brown paper bag in the corner :)
Thanks for looking!
Ivor