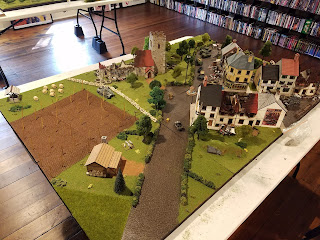 One thing I knew I wanted to try to accomplish as quickly as I could when I got back from this years Historicon was to add another two tiles onto the Normandy board. This would now make the board 6x4 and allow for a proper game of Bolt Action - and finally I've got it completed, though it sure as heck wasn't done quickly! 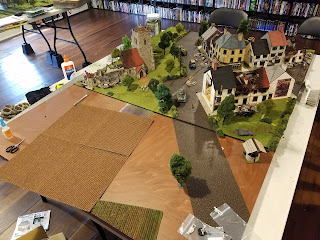 I had initially thought of bringing the village further down with a couple more buildings and why I extended the cobblestone street. In hindsight I wish I hadn't and created a dirt road instead at the break between the boards, as I changed my mind about the other buildings probably within a day after I'd set the street down, oh well. 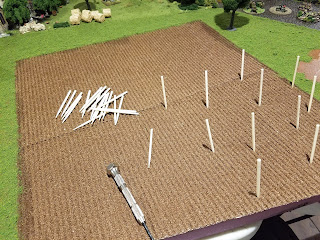 Something I've wanted to make for quite some time was a field with Rommel's Asparagus, so this gave me the perfect opportunity. I used some skewers for the poles and made it so that the poles could be popped out easily so gameplay wouldn't be affected. Anything can be put into the field, team bases, vehicles, squads, or whatever, and the poles won't affect anything. 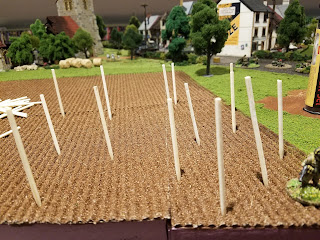 I originally thought maybe magnets for the poles, but the way the skewers are cut and how I drilled the holes into the field made it unnecessary. I cut the poles to slightly different heights to make it a bit more visually appealing as well. 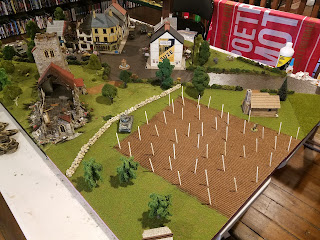 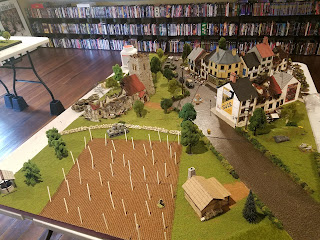 These were early test photos to get an idea if perhaps there were too many poles in the field, which I felt there were. 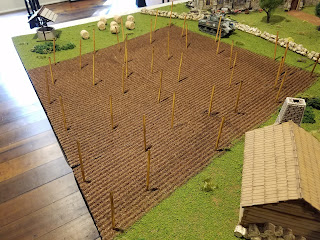 I took about six out in positions that made the field seem a bit less congested. A Vallejo sepia wash was put on all the poles to finish them off. I also put some roof shingles on a small little cabin that is positioned next to the field. I wish I had the gray colored shingles but I only had a few left from the old west buildings I did years ago, so brown it was. 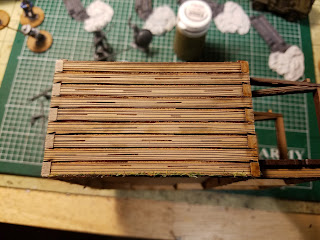 I also used 4ground base paint to cover up the connection points. On the left you can see the base color applied and then I went over that with the sepia wash, on the right - almost a match, looks much better in person :) 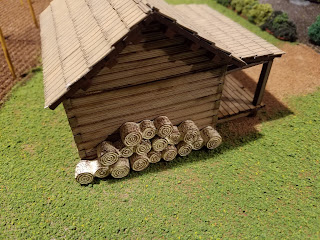 I threw some cut logs onto the side of the cabin. 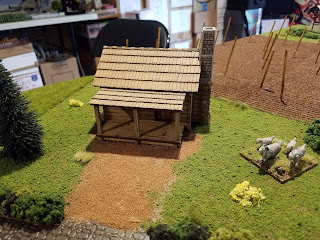 The front view of the cabin with some sheep off to the side.

And here's where we really lose focus, LOL! 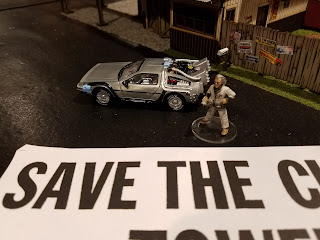 Something else I've been toying around with is a Pulp Alley Back To The Future game. I've thought a lot about it and really think it could work, despite the only fighting being melee. I've already got Doc Brown and a scale Delorean, but it's Marty that is going to be the big hurdle. Hasslefree have a figure that would be perfect, but it's a resin master and to purchase it and get it shipped across the pond will almost be $20.00, and I just don't know if I can justify 20 bucks for one figure. So we'll see what happens there. 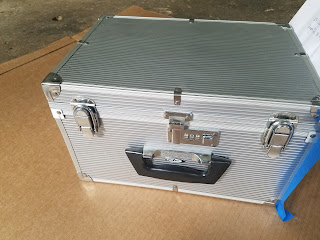 What I thought would be really fun for the game would be to have actual 1:1 scale props as the plot points. I'd have scale versions of each one on the table, but then when a character successfully grabs the plot point they could have the prop in front of them. With Jakob heading off to college he went through his room and threw out all kinds of stuff from when he was young - this case was for his Game Boy system and games. When he was heading to the garbage I kind of stared at the box for a moment and went "wait, that really looks like the case that held the plutonium in the first Back To The Future movie". So I rescued it and started working on making it like a movie prop. 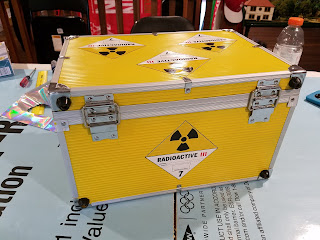 I got the case all painted up pretty easily, just needed several coats of paint. And then to find the appropriate stickers. 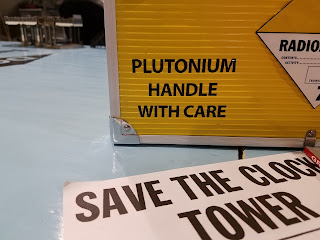 The stickers were found online, with the little plutonium sticker being my favorite that really identifies it to BTTF. 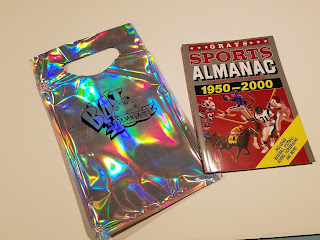 Here is the sports almanac, complete with the bag from the Blast From The Past store. 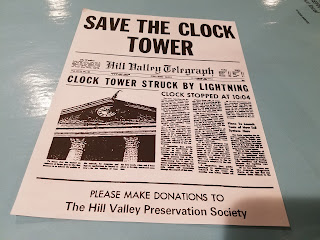 And the flyer for saving the clock tower. 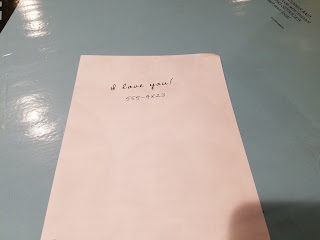 And it even has Jennifer's "I Love You" and phone number on the back. 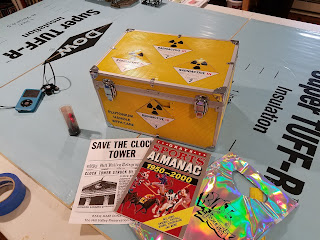 All three of the props together. I still have to fill in the holes on the front of the case from where I took off the handle, but I thought it would be fun to just get them all together for a quick photo. I still have three more to make but it's been forever since I built any movie props, so this was a great little project to start with. 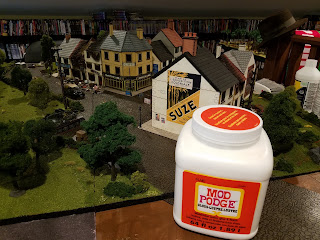 Now the frugal gamer part of the post. I've heard nothing but amazing things about all the different applications for Mod Podge so I used a 50% off coupon from Micheal's to buy some to try out. I think some water effects will be my first attempt to use it. 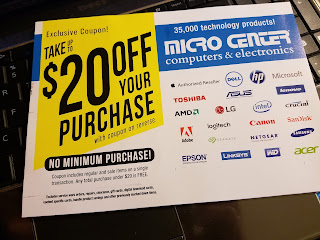 And finally, I got this coupon in the mail from Micro Center for $20.00 off your purchase. Sure it said "No Minimum Purchase", but c'mon, there had to be a catch some where. I decided to take a quick look at their website because I figured maybe I could use the coupon to grab a comic book creator software that I could use for Pulp Alley AAR's. 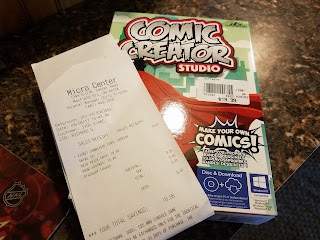 Their website was super easy to navigate and I found one right away, it gave me the closest store to me and even gave me the aisle number the software was in! While running some errands I stopped to check it out, found the store absolutely packed even though it was only 10am - wasn't sure if the coupon had anything to do with it, but it was crazy. Found the software easily and checked out without paying anything, not even tax!? So it was totally free! Hopefully it'll work out like some of the other fantastic comic book AAR's like Gordon's over at his blog http://ihavewroughtmysimpleplan.blogspot.com/2017/03/henry-ironside-andthe-pagan-stone-pulp.html


As you can see I'm all over the place with stuff - clearly I have ADD! - so apologies. And you'll really see it in the next two blog updates, I really have it bad!! The other two things I'm messing about on are so completely different to the stuff here -  I just can't focus on one thing anymore :)