Mantic's The Walking Dead All Out War 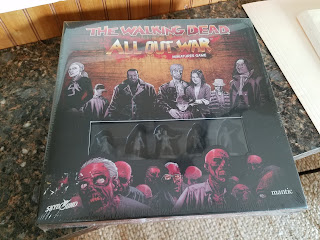 Truth be told, I'm really not into zombie movies, or horror movies for that matter. I'm just not into gore, ultra violence or that kind of stuff - and I definitely don't need to see a head split open from three different angles, with the obligatory splat of blood across the camera lens. But... in the past two weeks I've totally got sucked into both The Walking Dead tv show and now The Walking Dead All Out War miniatures game by Mantic Games. 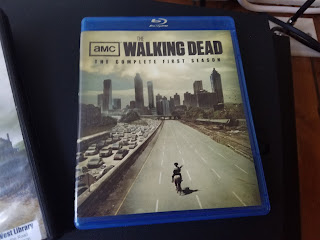 I've been sitting on season one for probably about 3 or 4 years. I'd heard all about how good it was so I grabbed a copy and there it sat until last weekend. With Therese away at a horse show I thought what the heck. HOLY SMOKES! It's really, really, really good! 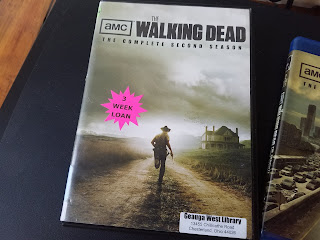 It's so good that I ran up to the local library immediately after I finished the last episode of season one to get season two! They only had a DVD version though, kind of a bummer. And I just finished that last night and HOLY SMOKES! So good, highly recommended - so far at least. Seems like shows like these always start out strong and then kind of go off the deep end.

Now, in saying I'm not really into zombie movies/shows I will say I have always been kind of drawn to zombies on the tabletop. First and foremost I think it's the terrain - I really like the idea of a dilapidated board and all the creativity that allows a terrain builder. And then second, I love the idea of a board being just overrun with zombie figures. One of my very first Historicon's had Jakob and I watch a zombie game that no joke probably had 1000 28mm zombie figures. Initially they were all behind a huge chain link fence that spanned the entire table, it was an incredibly amazing visual. It was interesting because it only had 4 players, and they controlled a small team of around 5 or so figures - it was an absolutely amazing thing to see, and the number of spectators around the table was crazy. You literally had to be on your tip toes just to see anything. Everyone was having so much fun - laughing, being animated, and everything else that goes with a great game. I haven't seen a game come close to anything like that spectacle since that night. 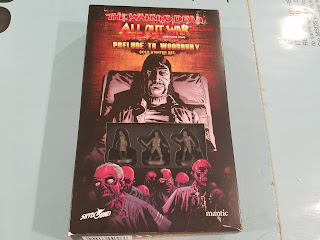 But I think there is another really big factor here for me in regards to TWDAOW - while researching the game and watching quite a number of AAR's and tutorials on You Tube, you can play the game solo. With Jakob away at college now, the opportunity to get someone (or just anyone) up to the studio to roll some dice just decreased a lot. So it's a whole lot of just me all by myself, and the Prelude To Woodbury expansion set allows you to play solo, so I had to purchase that. I've said it a million times, those of you who have regular gaming groups or friends you always game with hold them close, love them - one day you may be a solo gamer playing with yourself LOL!! 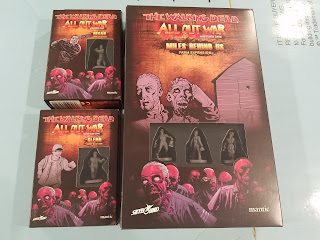 My friend Gabriel, who I met at Historicon, lives down in Florida so I sent him a quick message just to make sure he and the family were ok from all the devastation that Irma brought. They pulled through ok with a bit of flood and tree damage so that was good to hear. But then we started to talk about games and I mention how I'd got sucked into The Walking Dead. He gave a full endorsement of the game and then told me Miniature Market has some boosters and an expansion set on sale - well, a few minutes later what you see above was order and they just showed up yesterday! So thanks Gabriel for helping me spend more money :) 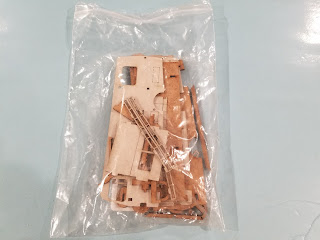 I snagged Dale's RV second hand for only $10.00 so I figured what the heck. I'm not even sure who the manufacturer is and there are no directions - but I've done enough MDF kits it really shouldn't be a problem. 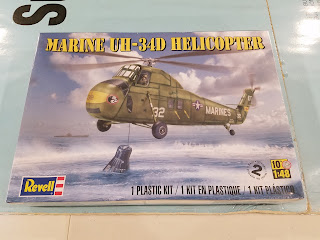 More couponing for terrain ideas - I grabbed this helicopter from Michael's with a 50% off coupon. Should be really neat to have crashed on a table. 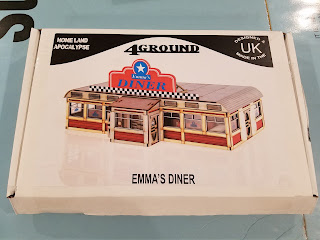 So with a post apocalyptic game in hand now I get to have some real fun with terrain! My first kit I'm going to work on is 4ground's Emma's Diner. I'd originally planned to use this as part of another 2x4 expansion to The Chicago Way board. 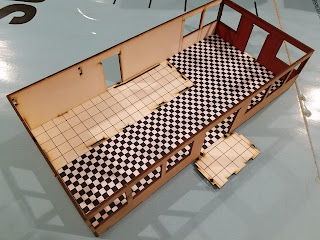 Here's just a quick peak at my first parts glued together, but I'm going to do a separate post on the whole process and I absolutely can't wait to share it, as I really think this one's looking to be one of my best builds :)

What is going to fun as well is that for the entire month of October I've joined up with a group of fellow zombie gamers who are going to utilize the 4 weeks to focus on painting zombies and survivors. Pulp Citizen over at the Eclectic GentlemanTabletop Gamer has brought together about 15 bloggers to participate. The rules are pretty simple -

To take part you just need to paint one Zombie or Survivor (or more!) each week, in any scale you like, posting it to your blog by that week's Sunday (we use Sunday's as the end of each Zomtober week). So that means posting one or more newly painted Zombie or Survivor minis each week on or before the 1st, 8th, 15th, 22nd and 29th of October 2017. This year has a very tight start and there is nothing stopping bloggers starting that first mini early in readiness for the Sunday!

It should be fun and I'm looking forward to seeing and following some new blogs as well as getting some inspiration to pick up the paint brush, though I should probably just stick with what I'm good at which is terrain. Be sure to check out some of Pulp Citizen's other posts too, he's currently working on a set of G.I. Joe figures that are just spectacular, as well as his Batman Miniatures Game figures - that was where I originally stumbled upon his blog some time ago!