No Time For Love Dr. Jones 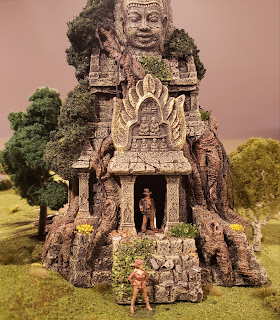 Who doesn't love Indiana Jones? The bigger question though is why hasn't anyone done a Short Round figure yet?! Crooked Dice I'm looking squarely at you 😃 Especially after CD did an absolutely fantastic Mola Ram figure from their last Kickstarter. I really would have loved to have seen Short Round as opposed to that female Indy figure they did. 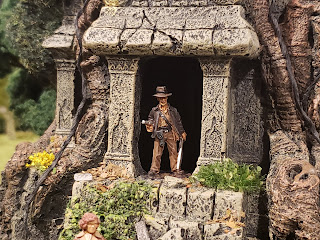 Indy is from Studio Miniatures, who right behind Crooked Dice, are one of my favorite miniature manufactures. Someday maybe I'll get him on the tabletop in a game. 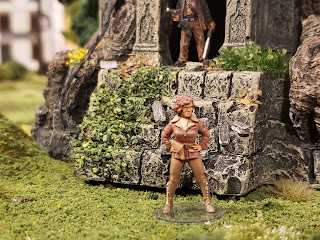 This figure is from Crooked Dice and I believe is modeled after Kristy Swanson who plays Diane Palmer in the 1996 movie 'The Phantom', starring Billy Zane and Treat Williams - along with a very young Katherine Zeta Jones 😃 A very fun pulpy movie if you've never seen it. 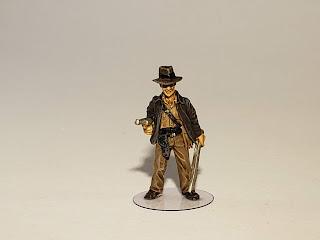 The only thing that is disappointing is that the Studio Miniatures are always a bit smaller in size when placed next to other manufactures, so Indy is definitely a bit on the smallish side. 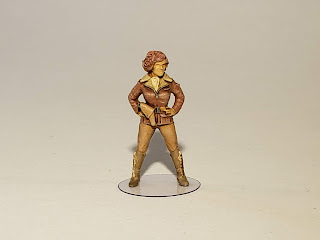 When I first came across this figure I immediately had ideas of a game where this model could represent Amelia Earhart and why I had to have it. I had early plans for a possible Historicon game a few years ago where there would be a rescue mission to get her back from her Japanese captors who picked her up after her plane came down on an island the Pacific Ocean. Again, maybe someday lol!

Until next time, thanks for looking!
Ivor
Posted by Ivor Evans at 8:03 PM