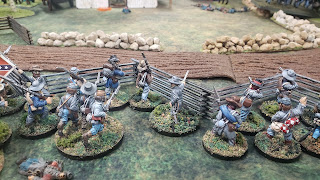 In my ongoing quest to continually start new projects while not completing old ones I got a bit of the American Civil War bug again. I've been having so much fun with club mate Jeff playing skirmish games that we thought why not give Sharp Practice a go? 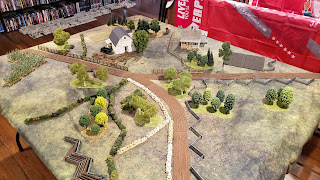 We talked about some different ideas and what we would need to just play a small sided game and I came up with a quick table design - now if you want to see some real epic scale 28mm ACW gaming check out my brother from another mother Jay White's incredible ACW games here. It's jaw dropping stuff and this is just one of many museum quality games - do yourself a favor and hit his follow button, you won't be disappointed! 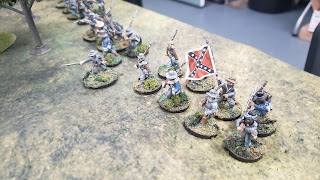 Despite much unpainted ACW lead filling quite a large box I still had a full force of Confederates ready to go - though some re-basing needs to be done as some movement trays are going to be in order for line troops. 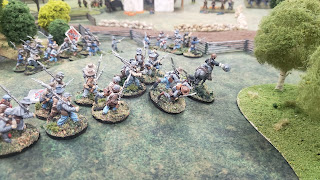 I also had enough Union forces as well for the game but absent mindedly left that box at home the day we played our test game - so you will see some Old Glory Confederates standing in for some Union forces in some photos, doh! 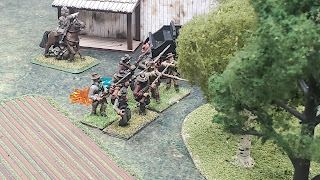 And speak of the devil, a unit of Confederates posing as Yankees. 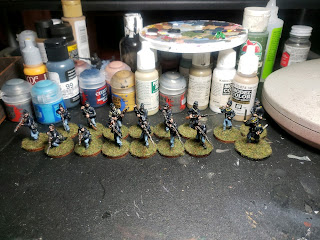 Jeff has been absolutely blasting through Union figures this past week though so you won't ever see that kind of thing in the future lol. 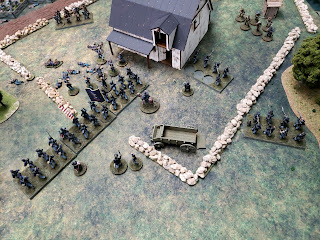 The Union forces coming in from behind the barn. 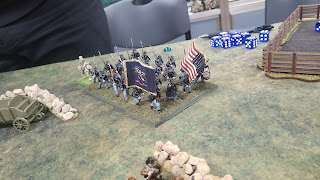 I've heard nothing but great things about Sharp Practice and the fact that it's random activation and really narrative driven immediately drove me to buy the rules set some time ago. 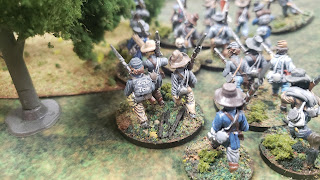 And they didn't disappoint! The activation sequence and the Tiffin card really make for an incredibly unique gaming experience. And honestly I'm having so much fun with games that have a unique activation I'm not sure I ever want to go back to a classic "you go I go" game again. 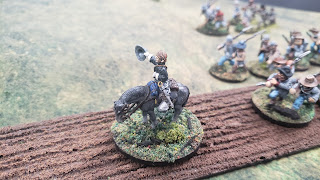 As mentioned above, due to the uniqueness of the activations my general and top leader (leader 1 in regards to the cards) didn't even make it out onto the table until turn 3. It was mad, but it really made the game even more fun and cinematic as I was asking the question of "what could be delaying General Laughton"? 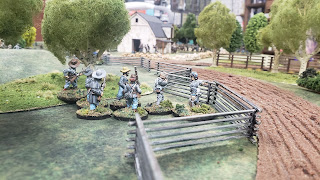 Granted, this was our first go at the game and admittedly I didn't do my share on reading the rule book ahead of time (though I did watch several videos on YouTube) so mistakes were made and flipping through the book was necessary but honestly we both had an absolute blast playing. This was a fun sequence as Jeff tried to get his unit of skirmishers around and into the barn, but my skirmishers had other ideas and just threw a ton of lead onto those poor fellas. 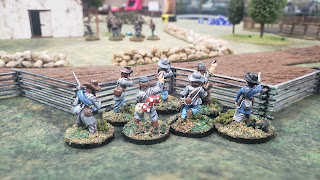 The "shock" mechanic works really well in my opinion and adds a lot to the game - my skirmishers taking aim at the Union forces by the barn. 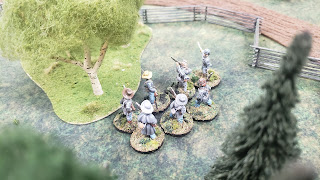 I'm going to start work soon on the 43rd Battalion Virginia cavalry, better known as Mosby's Rangers. I think this will be a really fun unit to play for ACW Sharp Practice as the mixed column list really suits my play style - plus I'll get to have some horses on the table. 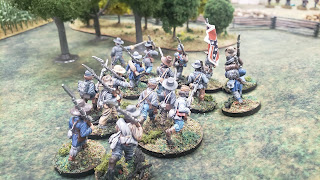 I've always been fascinated by cavalry and despite JEB Stuart getting most of the notoriety I think Mosby and his unit were much more interesting. So we'll see what the future holds for actually getting Mosby on the tabletop.

Until next time, which will probably be another Sharp Practice game, thanks for looking!