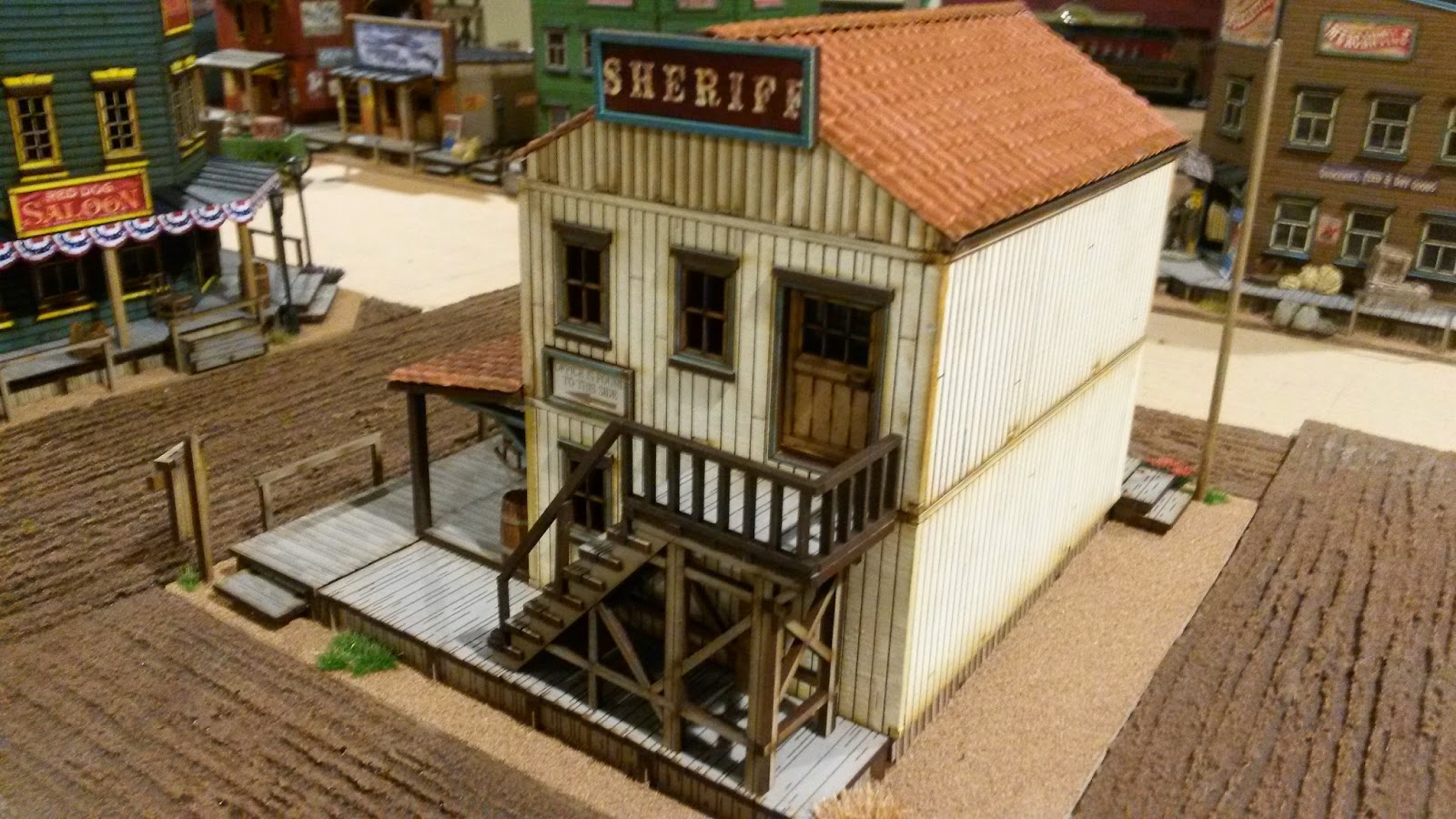 Well, after about a week of playing around with different ideas for the name of my town, I finally decided on Ford's Canyon. It's a small homage to John Ford and all the great westerns he made over the years. So, now that I'd completed that small task, it was on to upgrade 4Ground's Sheriff's Office! 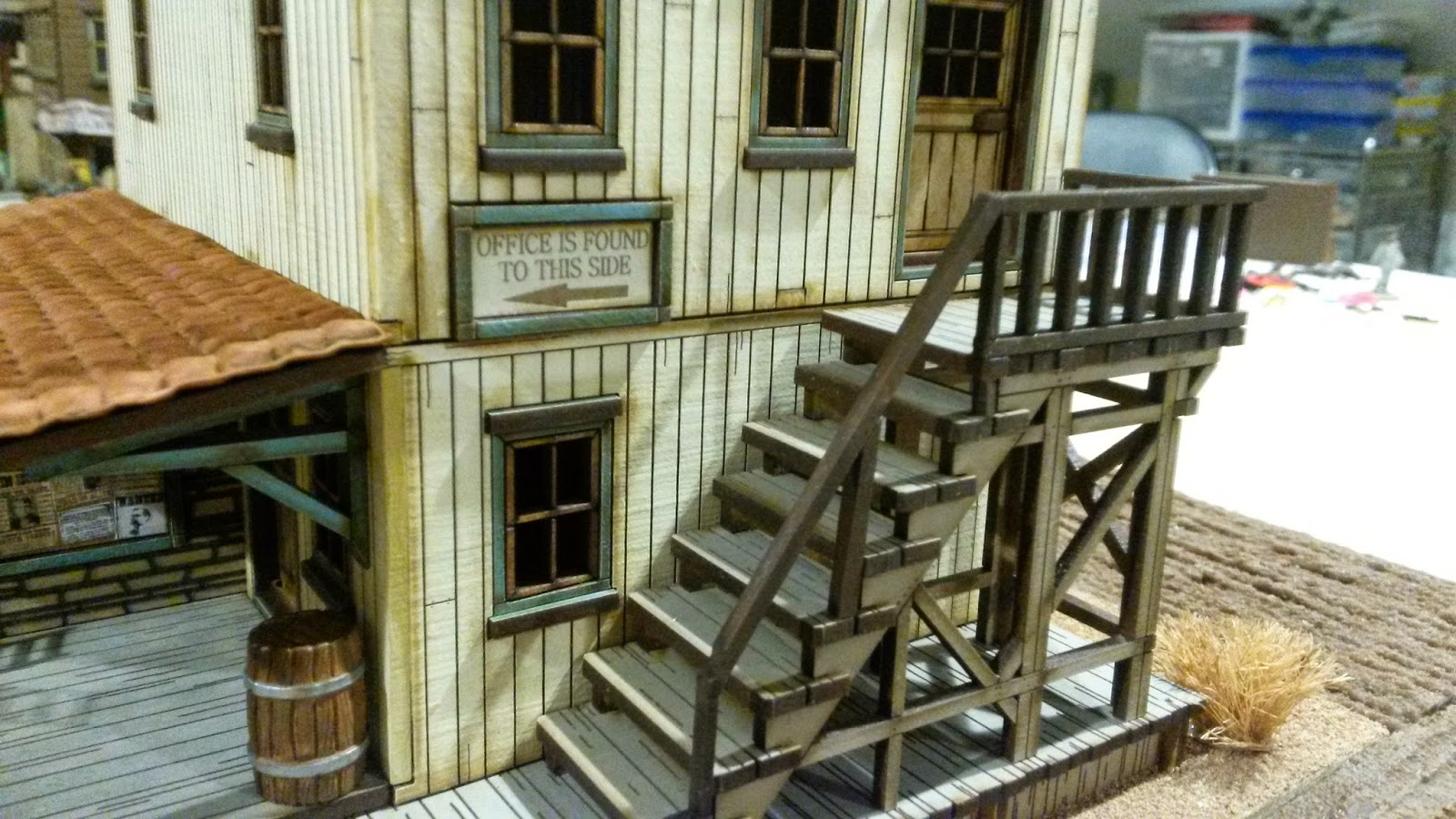 This is a really neat model - lots of interior details around the jail area are definite highlights! The first thing you'll notice right away is the roof upgrade. I used Plastruct O scale Spanish tiles. I found them on clearance at a hobby store, so I figured why not give them a try? A total of 3 coats of wash was applied to dull down the tiles, as they were pretty bright in my opinion. Overall, I'm pretty happy with the results, but if I had one thing I wish I could have improved (and I honestly don't know how to) is the edges and the peak of the roof. Maybe I could have had an extra row of tiles hang over the sides, but I had to be conscious of where the cuts were - I couldn't cut a row of tiles right down the middle! Something to play around with in the future I guess.

I had mentioned in a previous post about wanting to upgrade the stairways. The Sheriff's Office stairway became my guinea pig, and I couldn't be happier with the results! I will definitely be doing this with all my other stairways in the near future! The railing at the top is a cut to size ladder, left over from any number of 4Ground kits. I also used left over pieces from old kits to make the stair railings. All cut to size, and painted with 4Ground base paint #8, Burned Wood, to match.
I pulled off both original signs and added two new ones. The "Jail & Office" I'm pleased with, but I may end up changing out the "Sheriff" sign on the roof, there is just something about that one that I'm not too keen on. The "Jail & Office" sign I glued on to some extra wood cut to size, painted with base paint #19, Limber Blue, to match the window and door frames.  The roof sign was a left over from the Undertakers, again the frame painted with Limber Blue. I am going to switch out or change, I haven't decided which quite yet, the small roof "County Sheriff's Office" and the small "Office is Found to This Side". With the upgrades to the two main signs, these two really look out of place now. Add that to the list too! 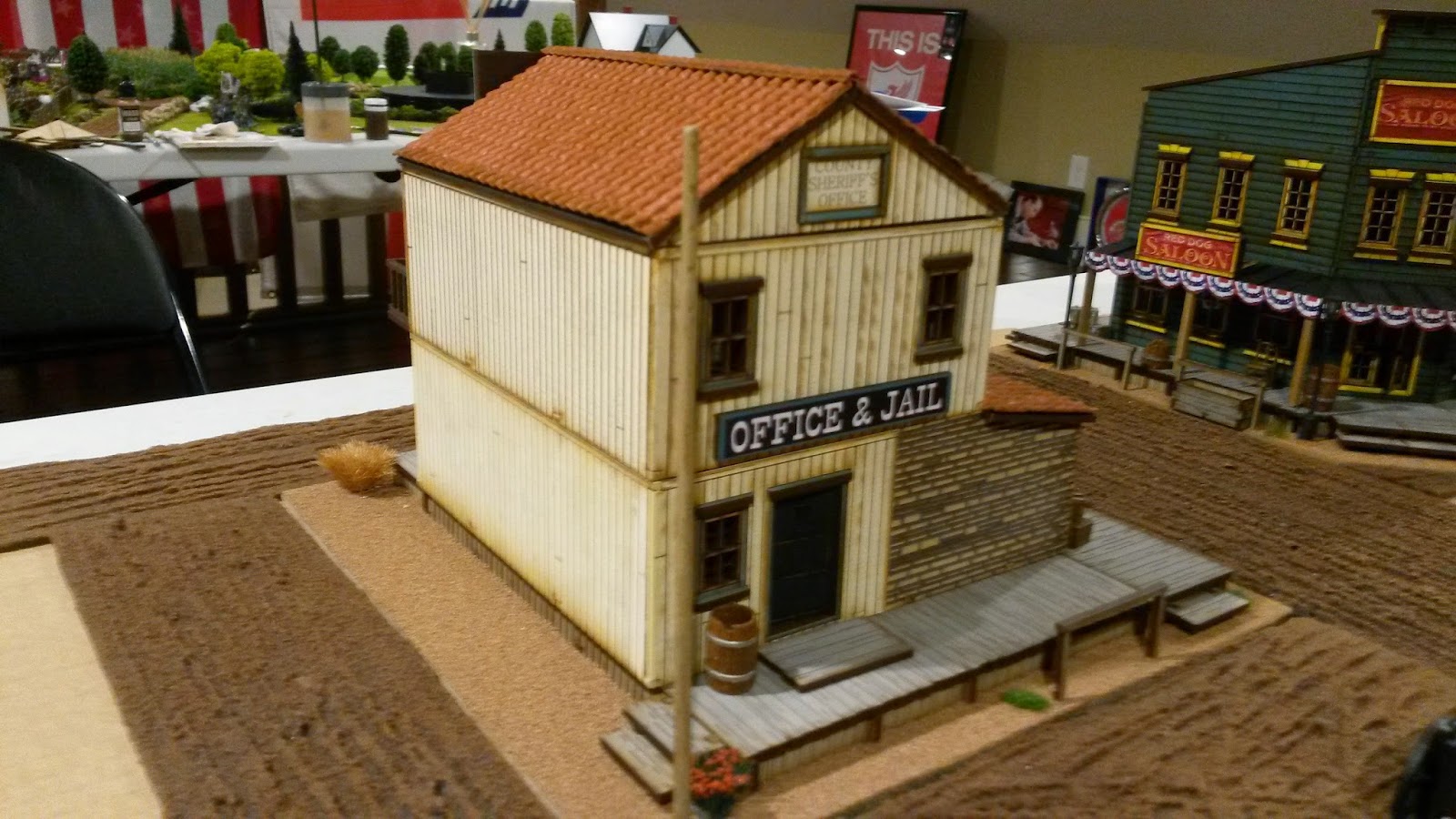 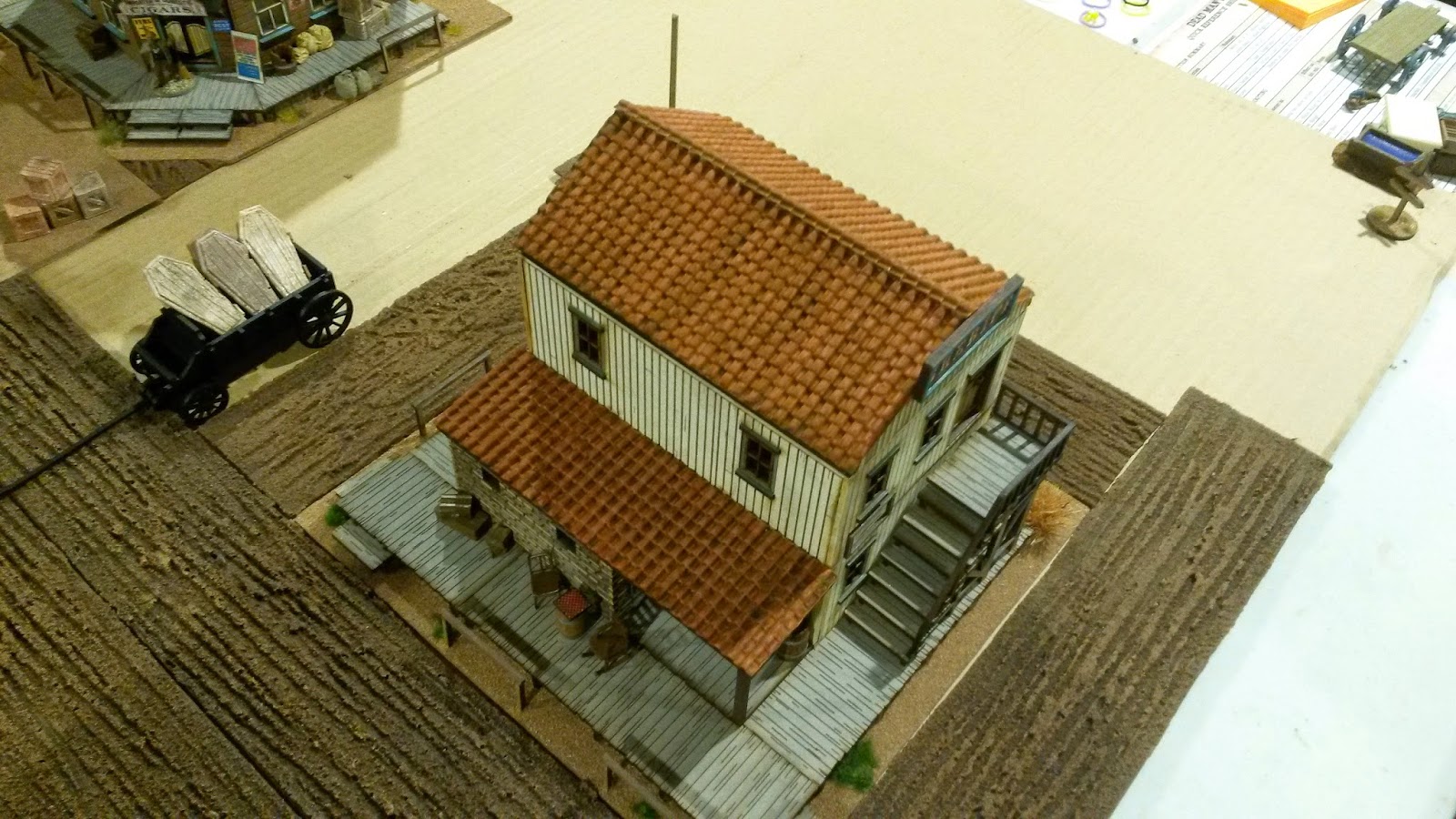 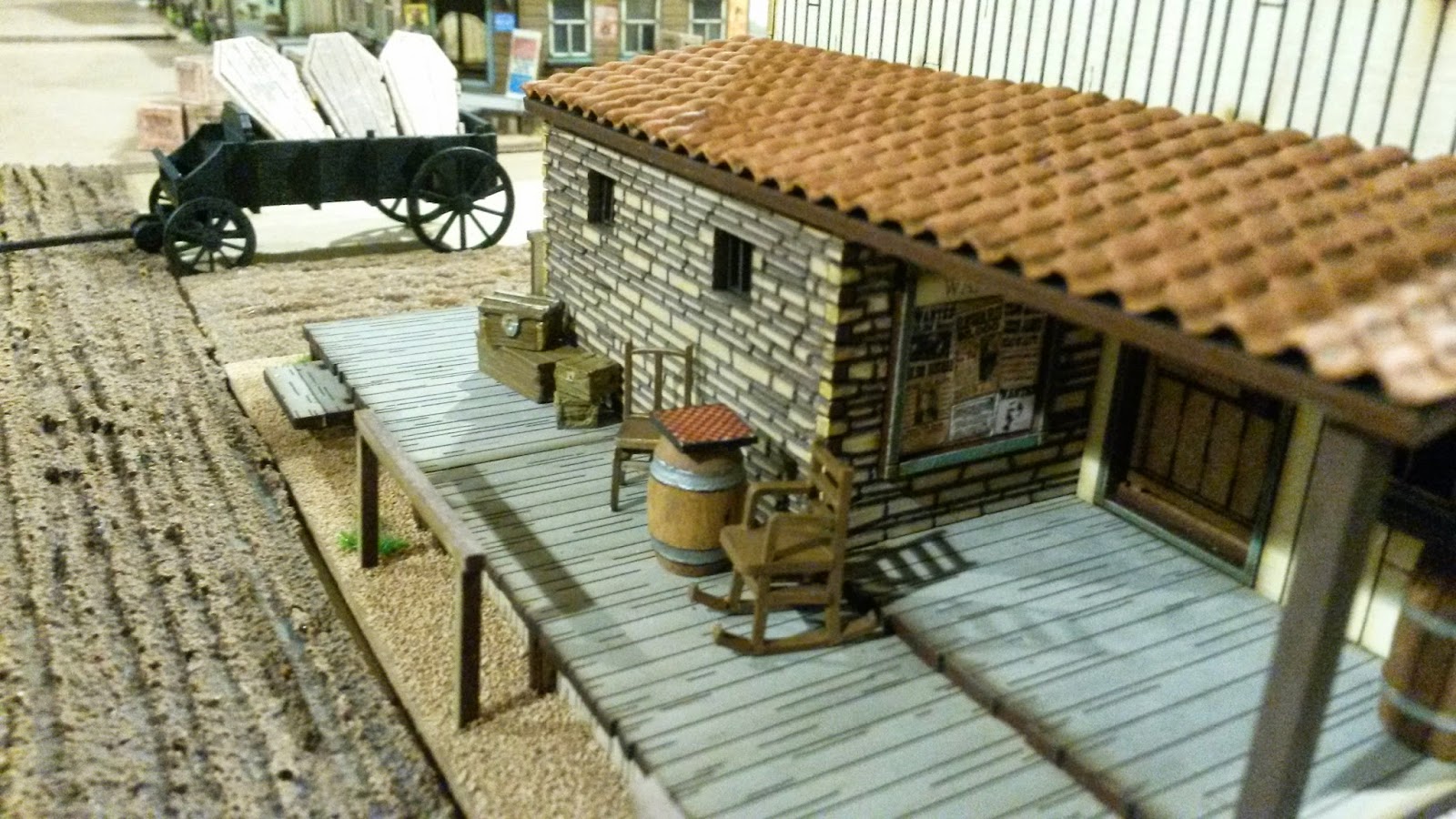 Another balsa wood post was added to the porch. A lot of little details finish off the building. I filled up the "Wanted" board under the porch with quite a few posters. A "Notice Board" sits in front of the porch, again, filled with quite a few posters. My favorite detail though is the checker board on the barrel and the two chairs next to it. One being a rocking chair. 4Ground make these little accessories, and most of them (tables, cabinets, counters, fireplaces, beds, stoves, etc.) are pretty easy and quick to assemble, EXCEPT for the chairs! Those little buggers are the hardest thing I tried to put together yet! I've already ruined two. But when they are built correctly, they definitely add a lot of narrative to your building. I also placed one of the Rix telephone poles in the corner of the building base - I originally thought of either making it a flag pole or a telegraph pole. Until I make a decision, I left it as is. Army Painter tufts and some JTT Scenery flowers were placed around all four sides of the building. 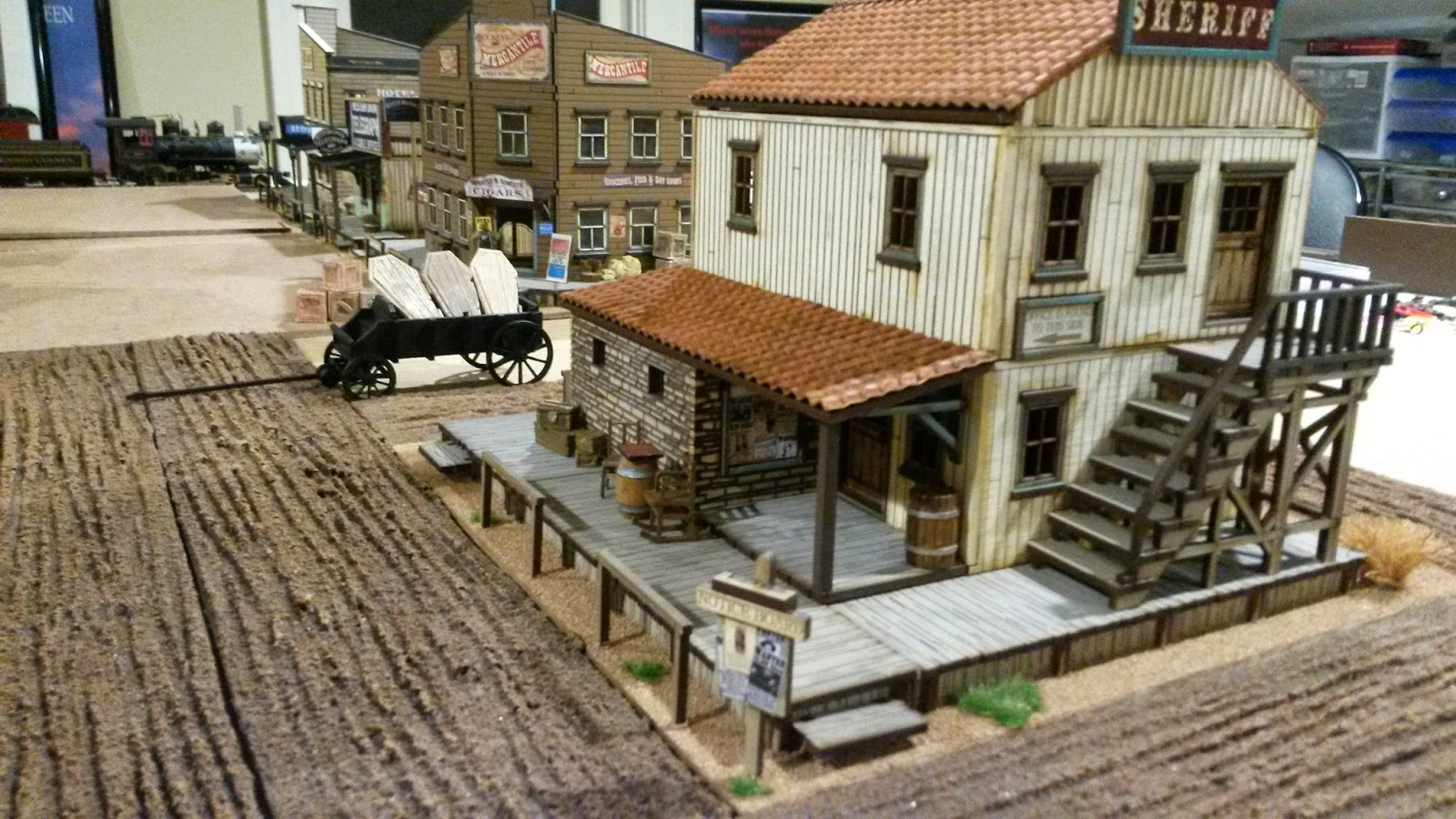 That's it, just a one building post. More two story building to come soon!
Posted by Ivor Evans at 7:19 PM