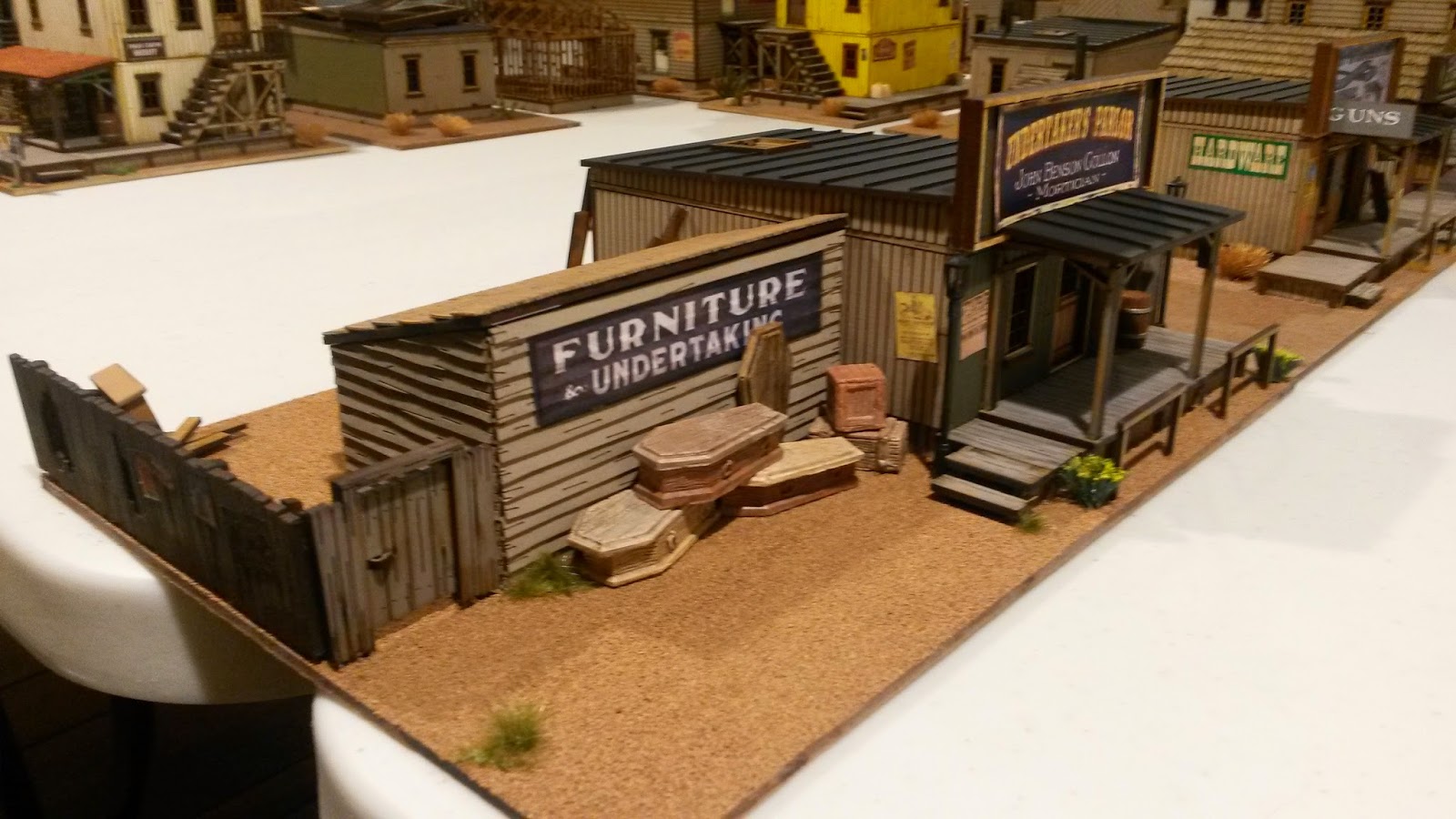 A good friend of mine (from the original Saturday mornings back in the day) and my son got a few games of Dead Man's Hand in a few weeks ago. A good time was had by all, and I only really messed up one rule - which for me is pretty amazing. I buy rules sets to play them wrong and make mistakes throughout an entire game! Anyway, after the last game it became quite clear that an undertaker was going to be needed in Ford's Canyon sooner than later (an older post tells how I changed the original C.F. Caldwells undertaker building into a saloon). The carnage that was left made the end of Sam Peckinpah's "The Wild Bunch" look like a walk in the park! 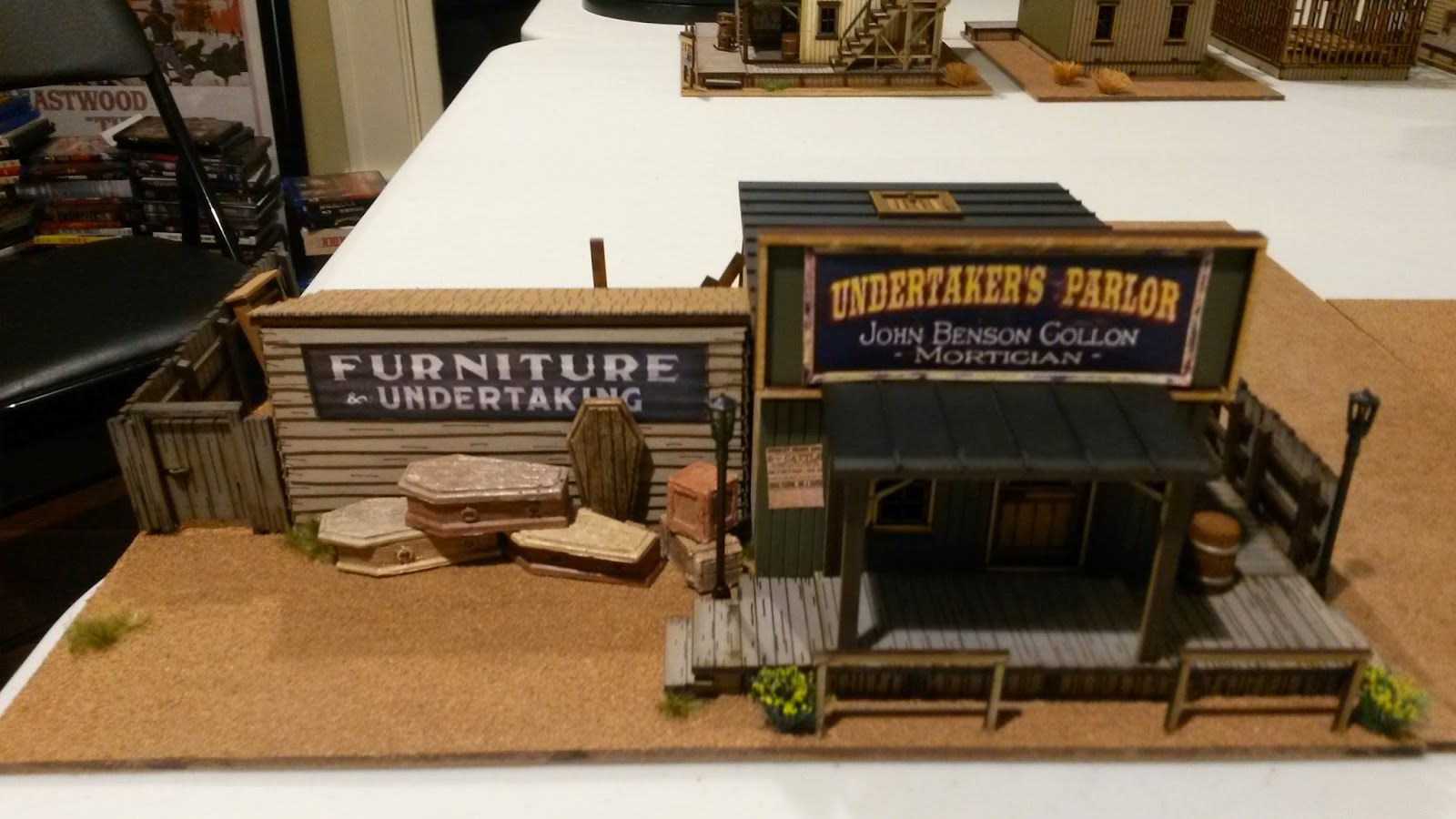 This new undertaker business was again born first through the sign I found. The sign is very simple, but the way "Undertaker's Parlor" was written almost felt like a frown to me, and the name John Benson Gollon was pretty neat. Like C.F. Caldwells, most undertakers were doing some other type of carpentry/furniture making, so I knew I wanted to make this build something more than just a side street building. I needed to make it bigger somehow. 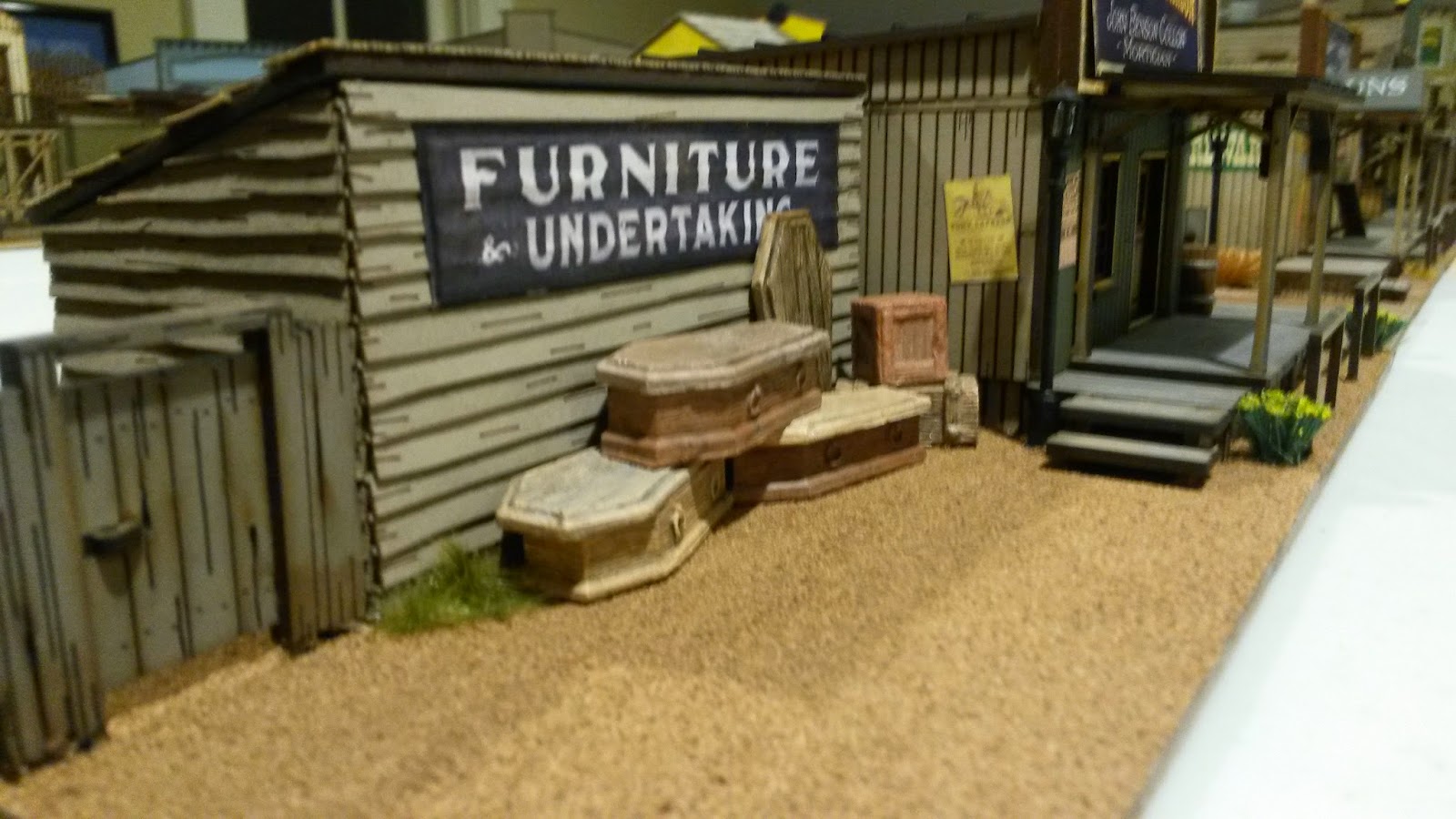 The main building is 4Grounds side street building #3. I grabbed a few of the exact same buildings because this allowed me not to have to make posts for the porches. Their posts have nice little details on them that my Balsa wood posts don't and the only real differences between the three side buildings is the roof sign and window placements. I painted the front wall with Plastic Soldier Army Sprays "British Armour". 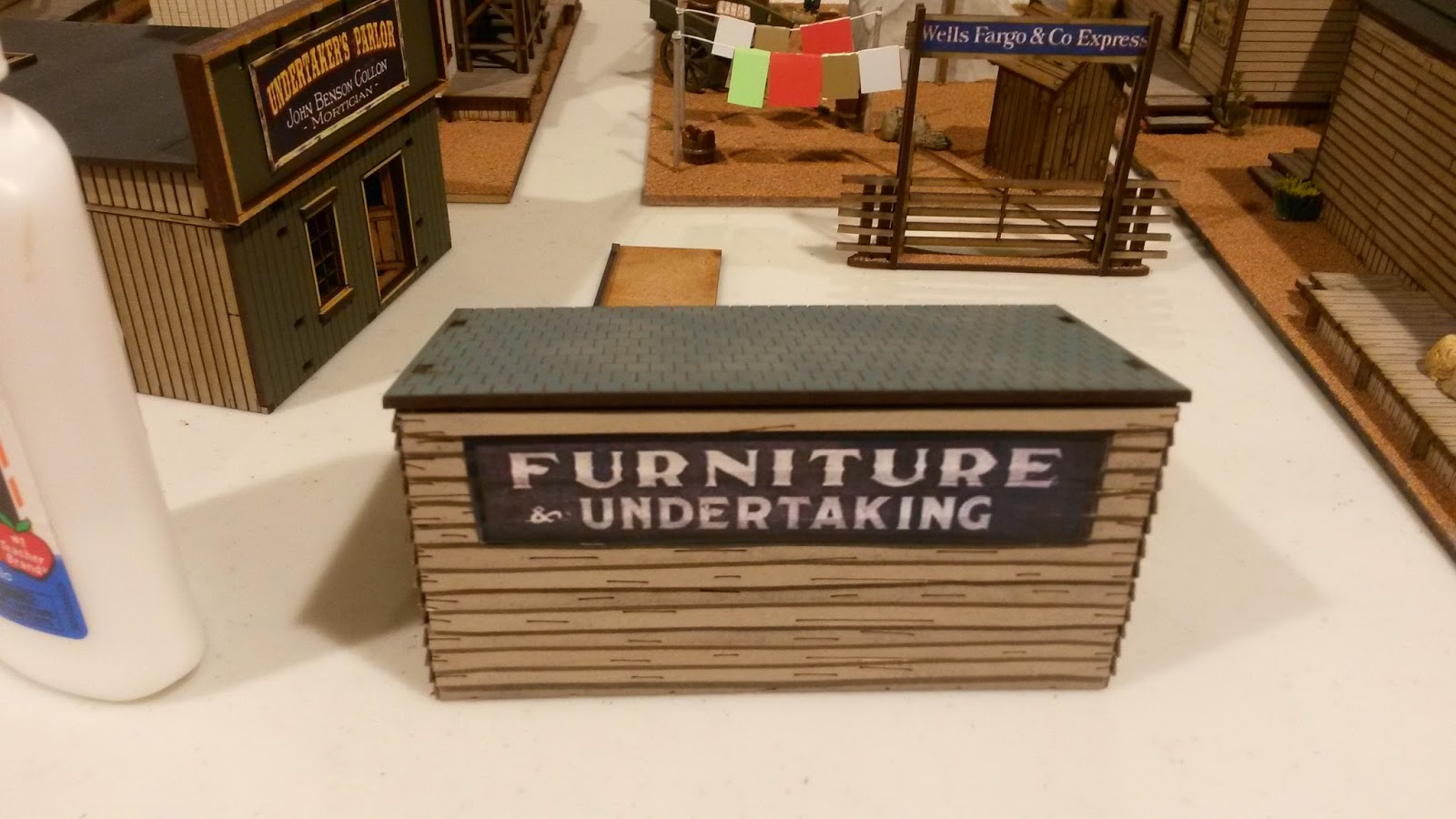 I have a ton (and even more to build still!) of 4Grounds excellent 28mm Historical range of buildings. I had the Woodshed/Cart Shed from their Age of Black Powder range (pictured above) already built and I knew with the wood siding I could work this into the new undertakers, I just needed to decide if I wanted it vertical or horizontal to the main building. I found a really neat "Furniture & Undertaking" sign that fit perfectly onto the back of the shed, which made the decision of placement very easy. 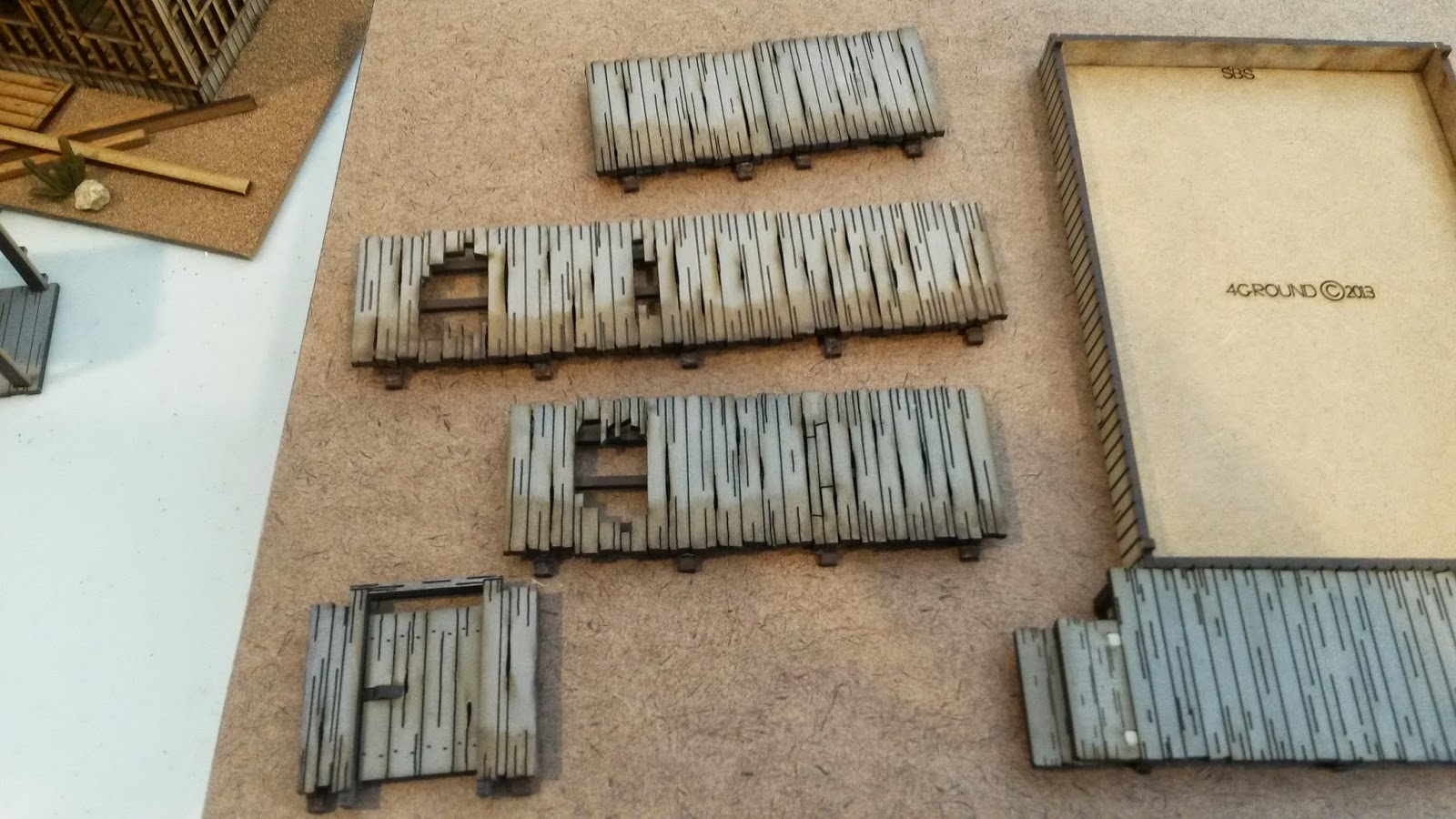 The basic footprint of the building is bigger than any of my other builds because I knew I wanted to add the extra shed and I also knew I wanted to get the Yard Panel Fencing by 4Ground in there as well. I set the glued sub base and boardwalks down and weathered them with Age It Easy by Micro Mark. 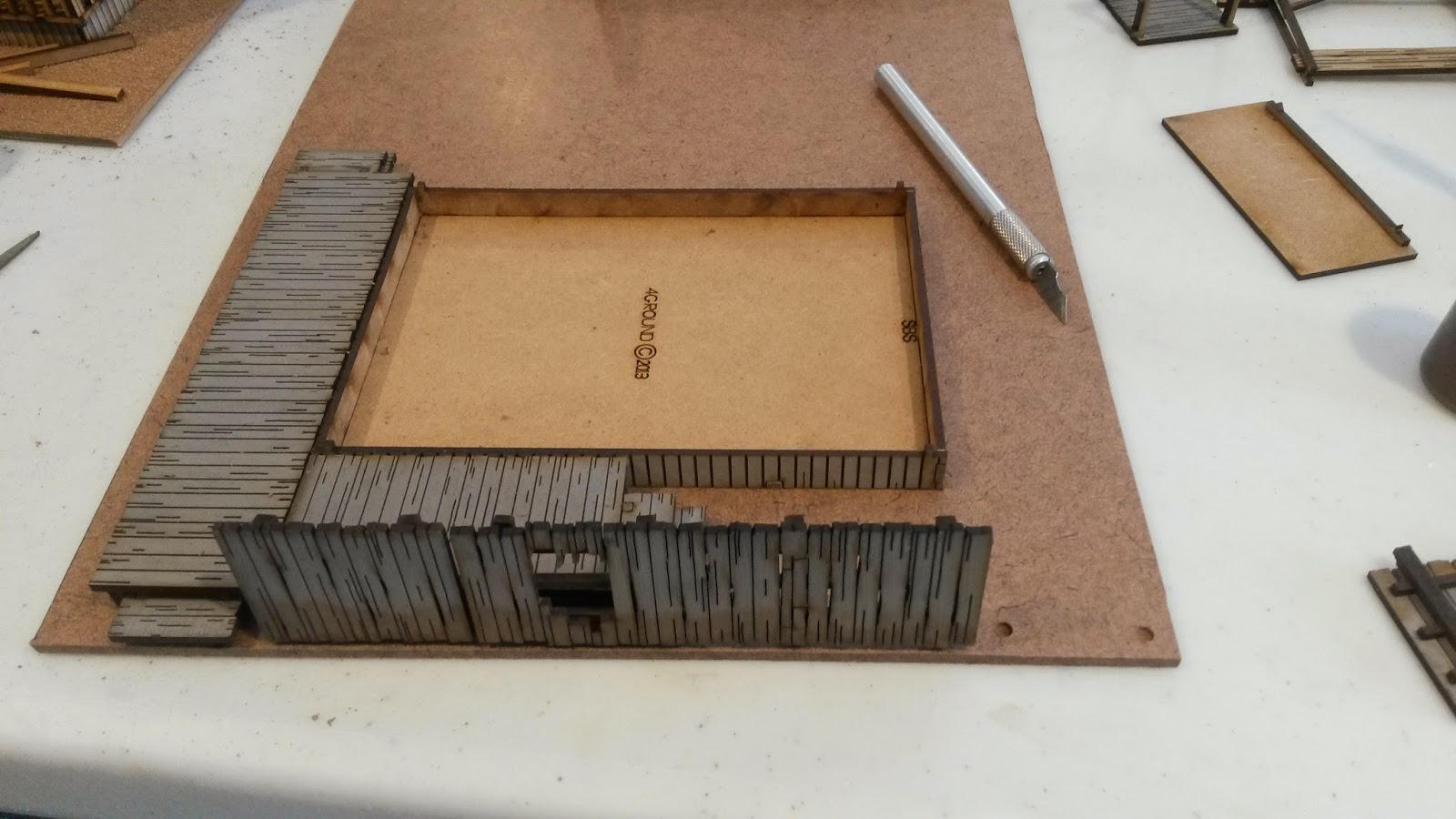 I had already built the fences, so I had to pull the bases off and I drilled small holes into the footprint to secure the fence better. The fences were also weathered with Age It Easy and also a new product I found called Dark Mud by AK Interactive, was placed along the bottom of the fence. It's an enamel and you just paint it on - I used a Q-tip to soften the transition, and honestly I'm pretty happy with it, though my awful camera phone doesn't do it justice. 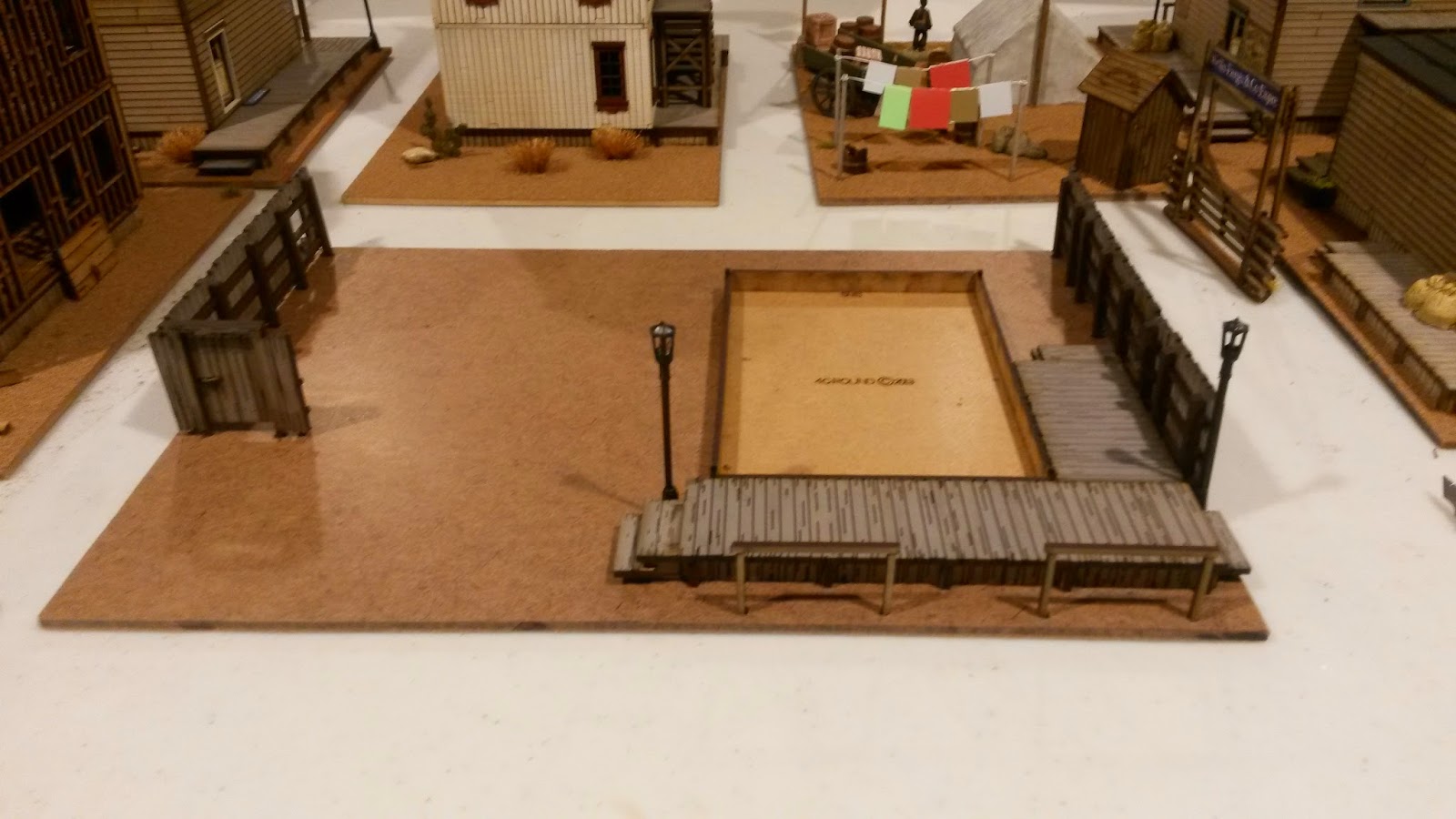 I added my customary lamp posts and horse hitches to the front as well. 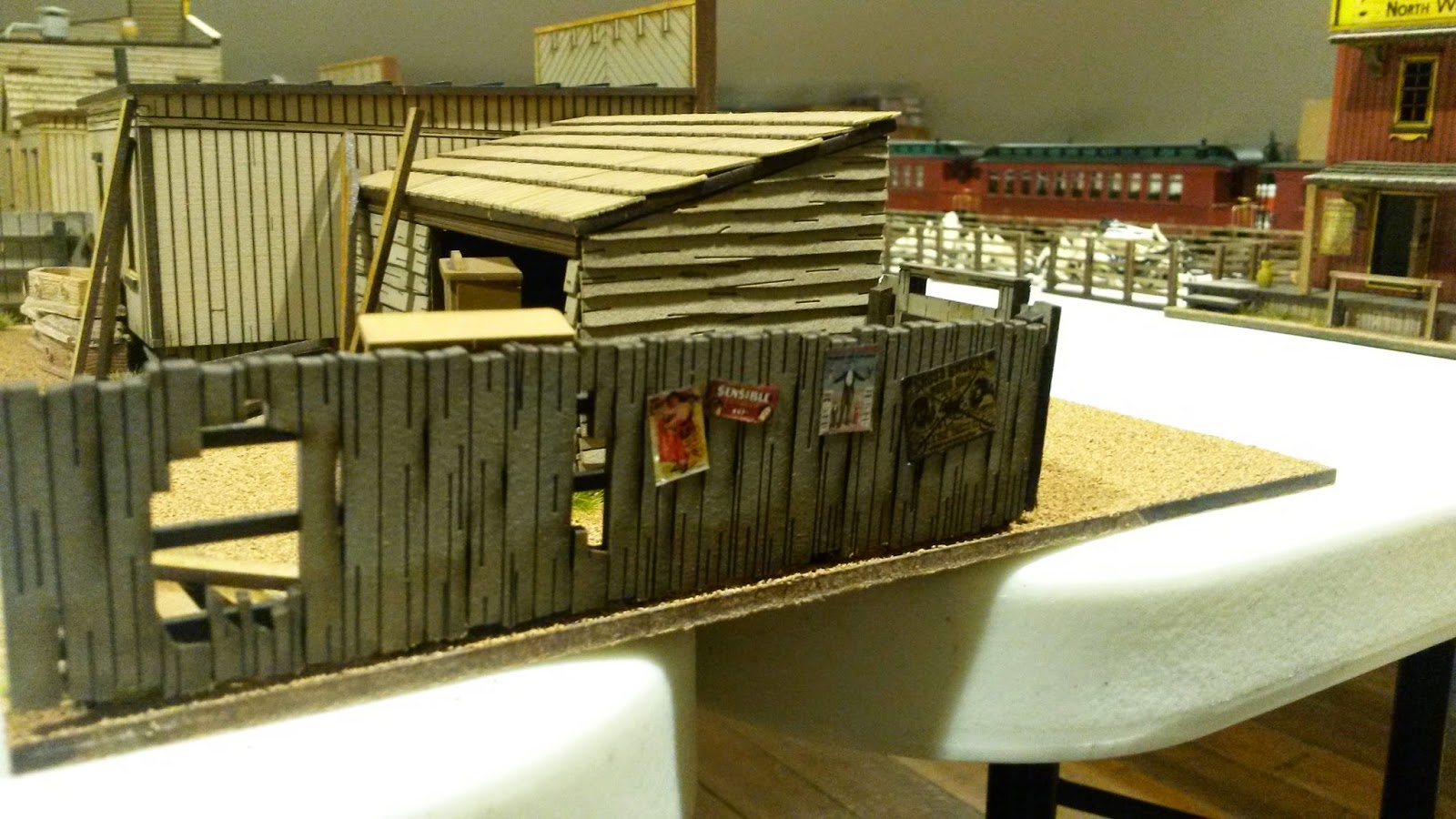 I added a lot of posters to the side fences. They are all from old 4Ground kits. 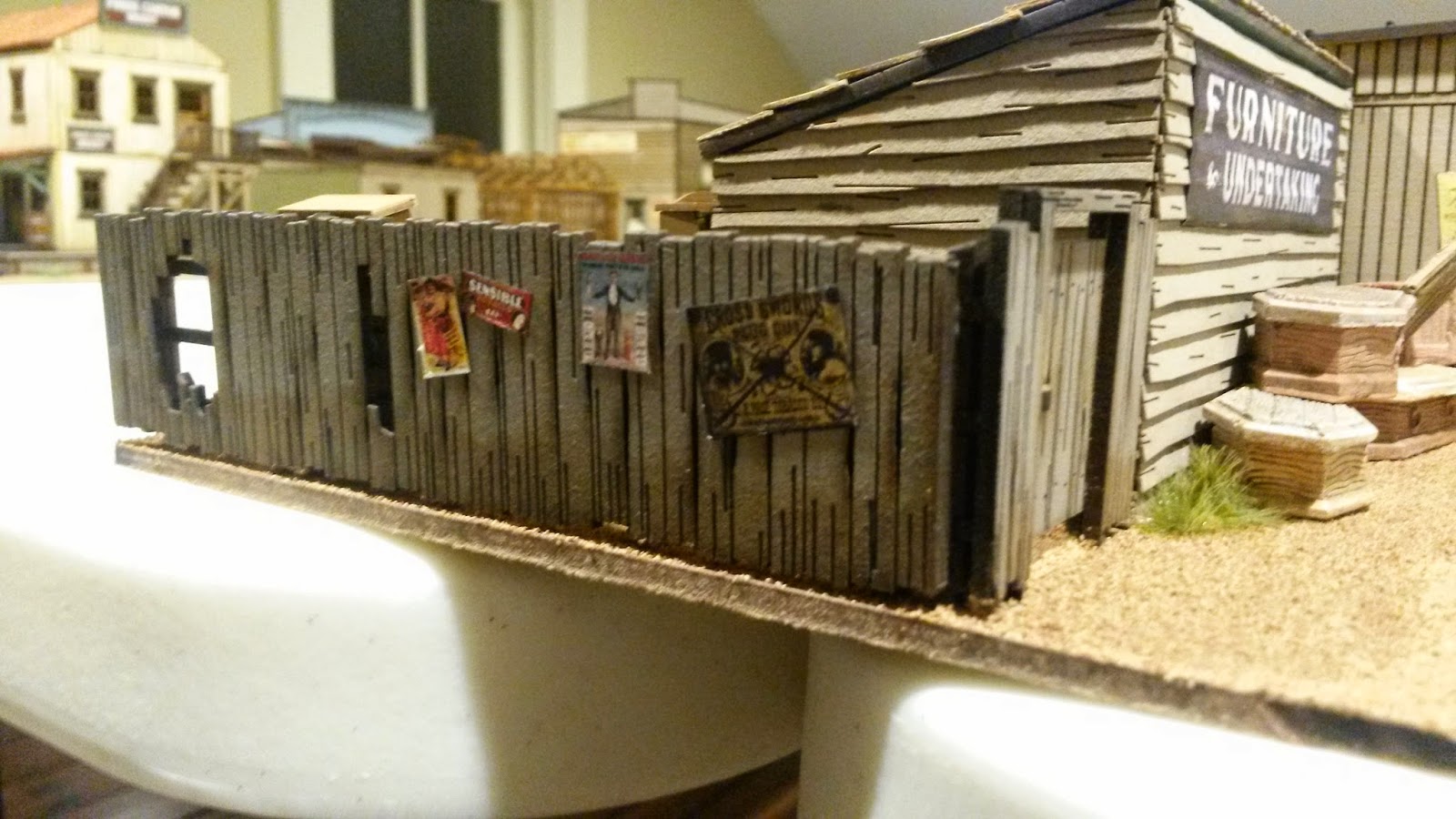 One small tip I can give on signs and posters is before you place them, take a black Sharpie and go around the four edges with the marker. This simple addition will improve the look of your signs and posters on your buildings, I guarantee it! 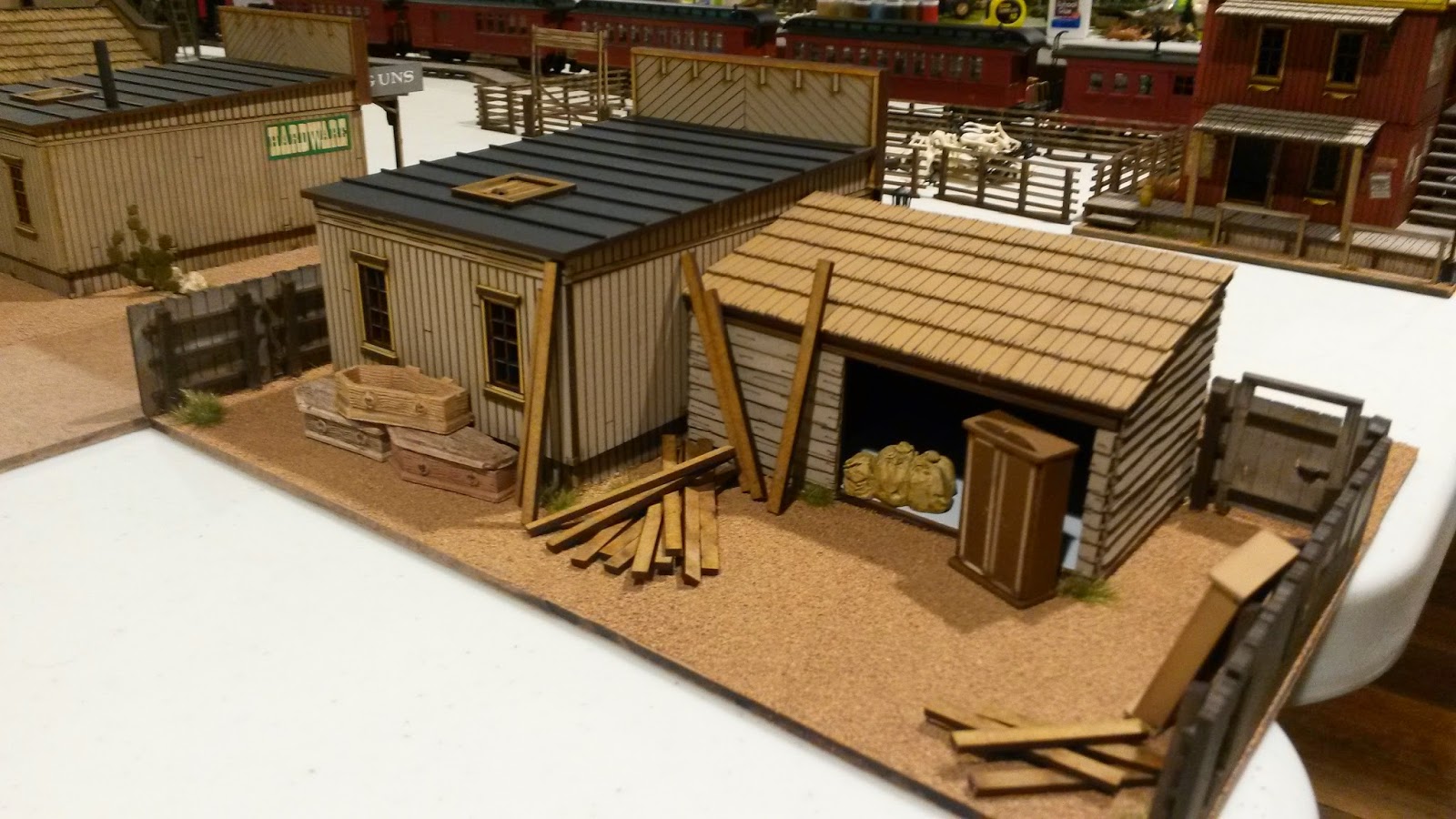 The same styrene strips, Evergreen #142, from all my other builds were used here as well for the roof and porch overhang. The coffins are made of hydrocal - I got them a long time ago and can't remember from what company. I got a ton of them, and boxes as well, pretty cheap. Though they definitely need repainted. 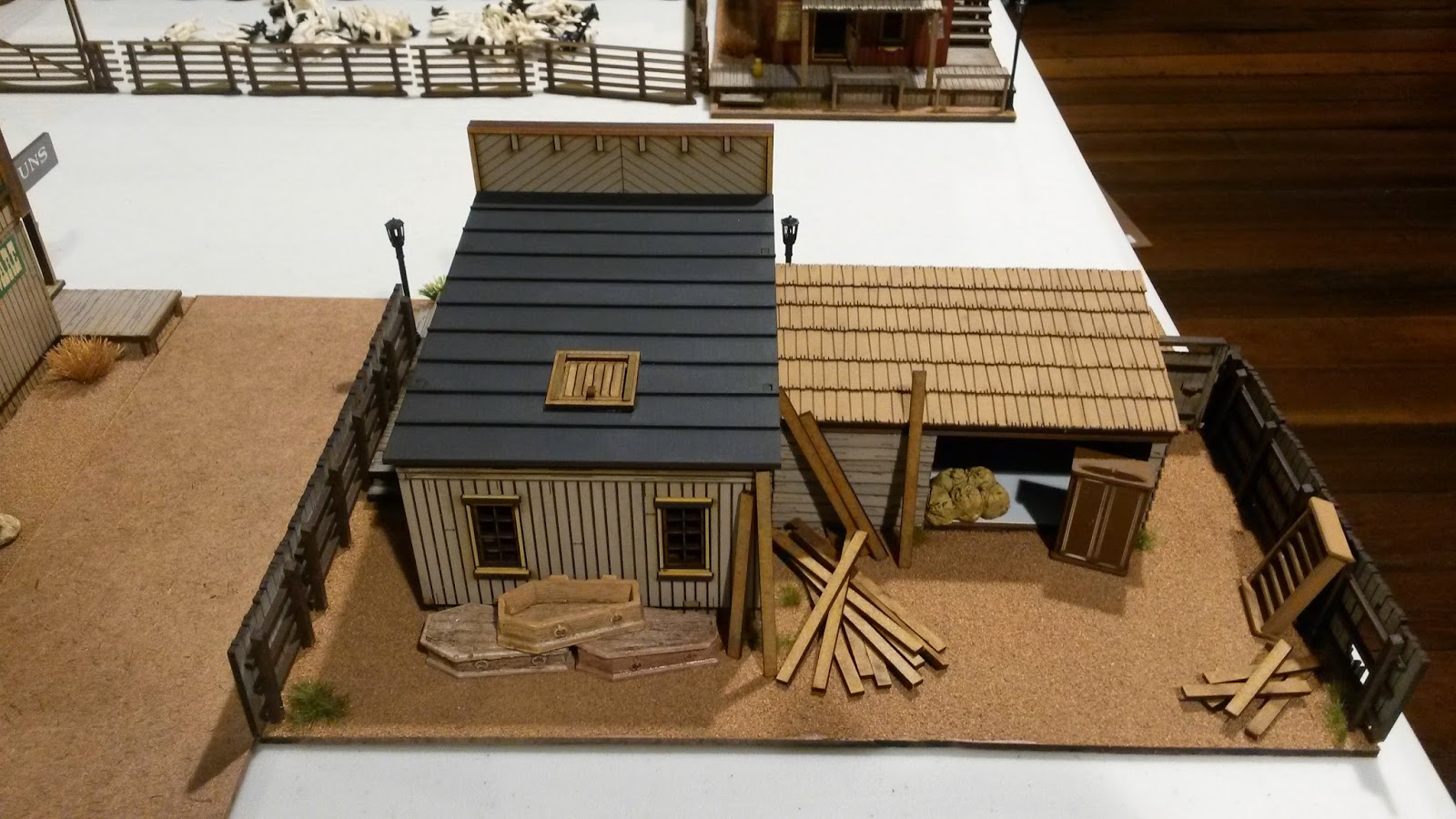 There is one wooden barrel next to the building made by Hirst Arts. These are new to the table and these things are fantastic, and inexpensive! Took paint really well - I decided not to prime them in hopes to get a little more weathered look (they come white) by painting my initial coat of wood brown very thin. I couldn't be happier! I've got close to 40 on the table now. A silver Sharpie is all I used for the bands. 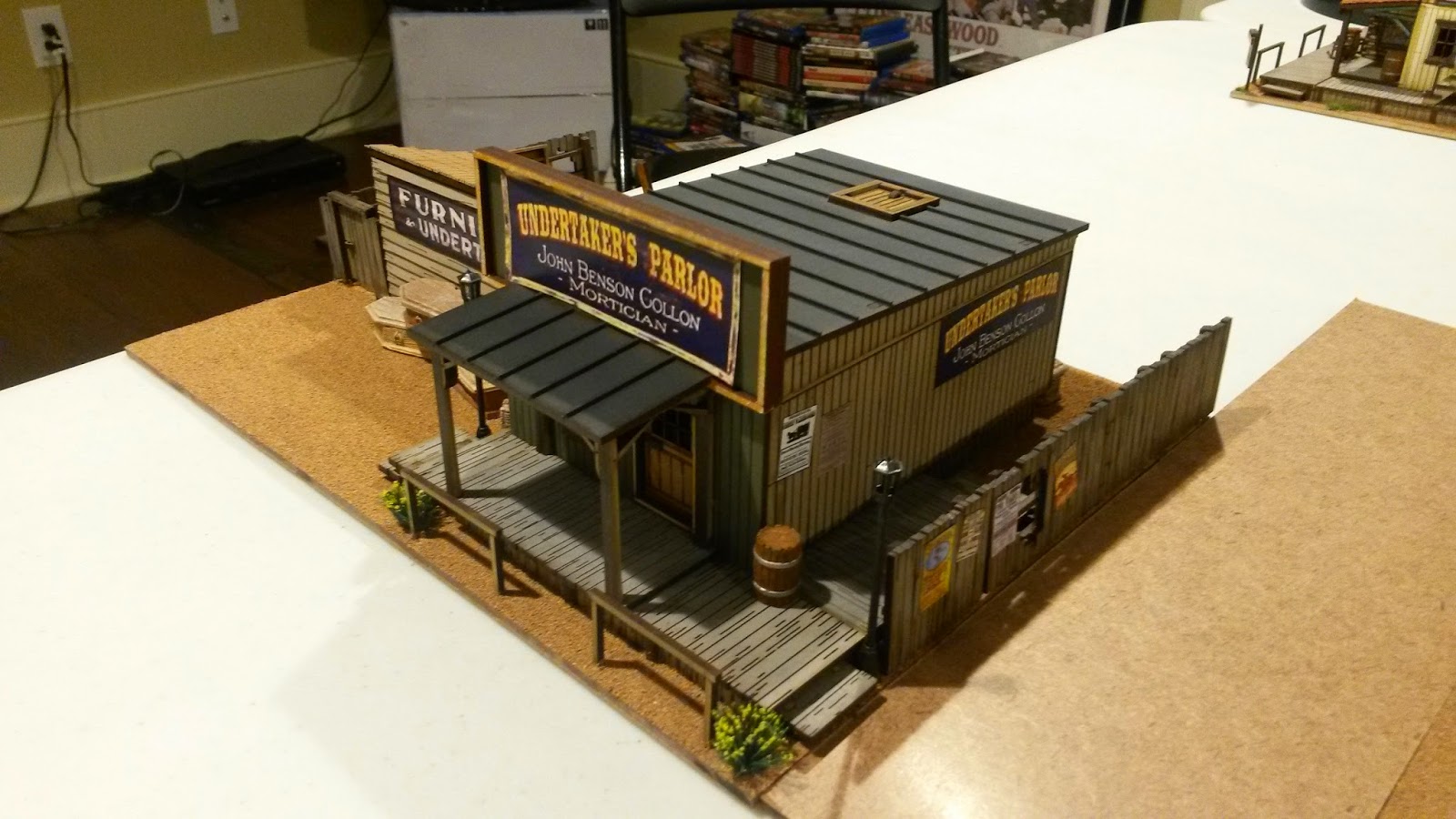 Army Painter tufts were placed randomly around the building and two yellow JTT flowers were place out front. The basic flock is Woodland Scenics Ballast Fine Brown, and dry brushed with a light gray to bring it out a little bit more. 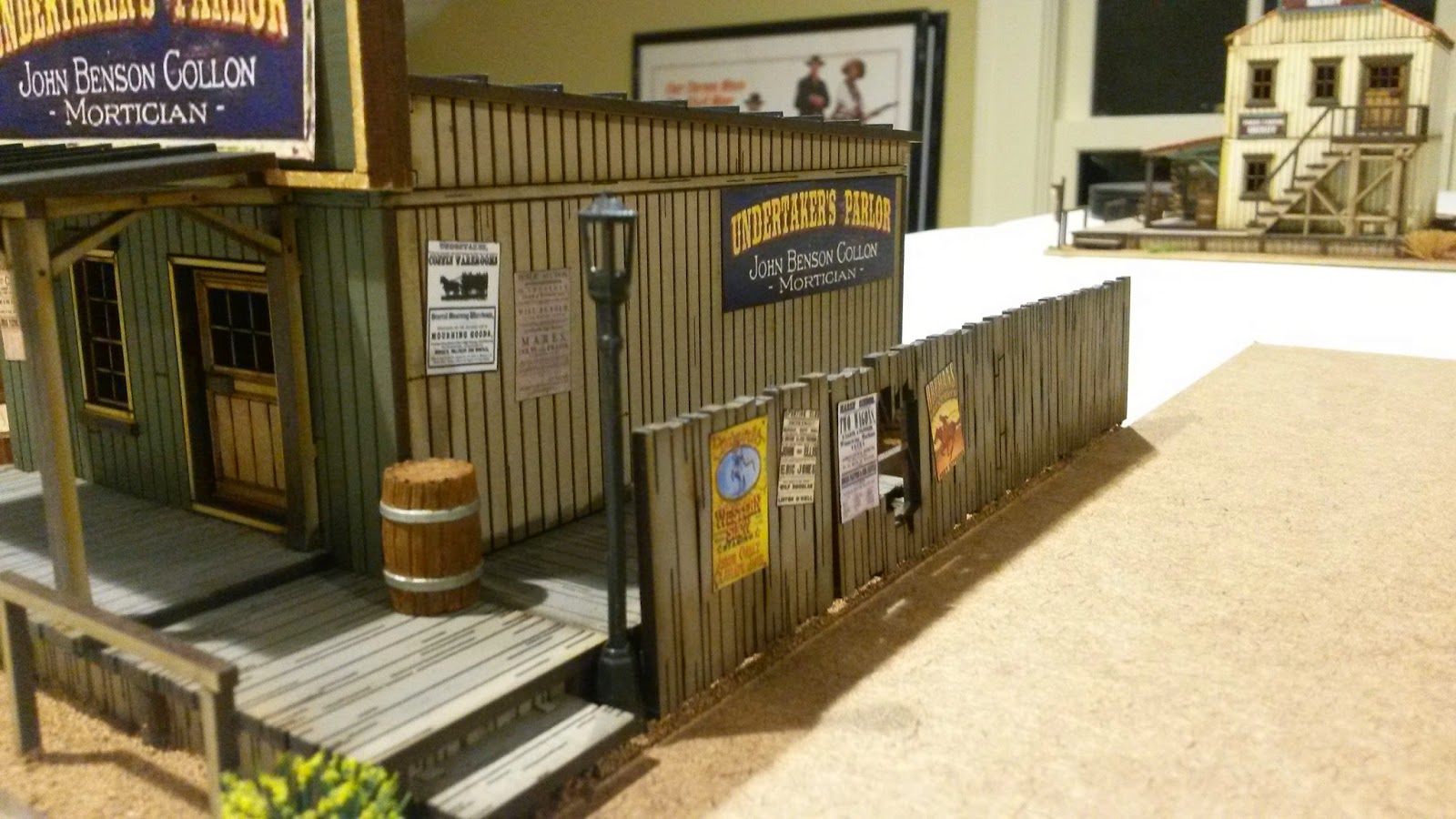 That's pretty much it, as always thanks for looking!