Despite having all my prep time basically taken away from me over the past two months, and knowing that in order to make a somewhat presentable game I had to cut a lot of neat ideas out and leave stuff I really wanted to do out of the both the table and game - and all the stress that those things brought! - finally getting down to this years Historicon convention was by far and away my most enjoyable one I've had since I've been going. And it was all because of the people! 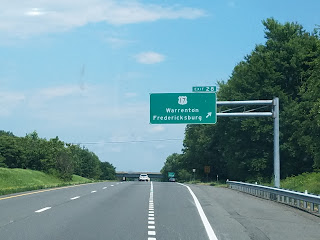 I wrecked my knee pretty bad last fall playing soccer and among other things it makes driving over long periods extremely painful, so now that Jakob has his license he got to experience turnpike driving for the first time and dad got to experience floorboard braking on several occasions.

It was nice to not have to drive the whole way, as well as back and forth between the hotel and convention center. We arrived around 4 o'clock Wednesday, got checked into the hotel quickly and then made our way over to the convention center to begin setting up for Thursday mornings game.


I had table 58 and that turned out great because I was right in front of David and Kalissa Skibicki's http://spudnick080.blogspot.com/2017/07/historicon-2017-overview-report.html  outstanding WWII table (I just heard they took second place for "Best In Show") and then right next to them was the Luke to my Rey, Miles Riedy http://lairoftheubergeek.blogspot.com/2017/07/historicon-2017-final-thoughts.html who put on one of the craziest and most popular games of the convention (also won another PELA award, I think his 5th or 6th in a row). It was really great to have these guys so close to the table - they are turning into great friends even though we only see each other once a year.

After getting the table set up Jakob and I had the opportunity to go to dinner with Miles. It was great to be able to sit down with Miles and it not be in a noisy convention hall, and also for more than just a few minutes. Those of you who have been following for a while will know that Miles is someone I've tried to emulate since I started running my own games, he is hands down one of the most popular game masters at HMGS events evident by the number of repeat players he always has. With Jakob heading off to college in a few weeks it was great to hear experiences that Miles had with his son Sean - the similarities between the two boys was very interesting. And just getting to know Miles more on a personal level I now I also know why he had such an attachment to those Louisiana Tigers I played in his ACW game years ago :)


I will do a separate full report on the two games I ran, but here's a quick overview. First and foremost, I had absolutely brilliant players in both my games - a convention game is really only as good as the players and I had 8 fantastic people over the course of the two games. And several of those players I continued to bump into throughout the convention. Both Gabriel and Francisco from the Thursday morning game I saw quite a bit (it was very clear we all liked the same type of games!). Francisco and I watched the entire Blood and Plunder sea battle demo Thursday night and Gabriel and I hung out quite a bit on Friday, among other things watching and playing a few turns of Studio Tomahawks new Congo game. I really hope to see them again as it was a blast! Both my games were sold out before tickets were even available which was just crazy. I think everyone had fun and there is even photographic evidence of my son smiling while playing - which is amazing because he has said on many many occasions that he doesn't like playing in my games (I made him sign up for one game because I paid for his way into the convention!). Both games went right down to the wire and lots of laughs were heard with the use of the interrupt cards as well as gadget cards. One other thing that has become very apparent while looking at photos of my tables is that a black cloth is needed to cover the wood convention tables - it really takes away from the boards and honestly is really an eye sore. 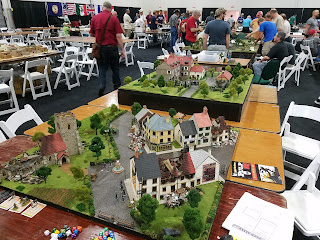 The Firelock crew were at the convention demoing Blood and Plunder - this was the demo board in the vendor hall for the sea battles. It was an absolutely amazing piece of terrain! It looked to have about four layers of resin to create the water effect and it had these brilliant coral reefs built into it - the darker green areas in the photo. I also had the opportunity to watch a full demo Thursday night of a sea battle in the main convention hall as mentioned above, but also to talk to Mike Tunez, who is the man behind Blood and Plunder. It was great to hear Mike talk about the beginnings of the journey and how crazy the last year has been. All around the entire Firelock team was just outstanding!
*and as a possible hint for next year, Miles and I are kicking around the idea of working together on a game of epic pirate-y proportions; fingers crossed we can make it happen*

Saturday morning found me playing in my one and only game for the entire convention - the other two I signed up for got cancelled ironically. As I do every year I signed up for one of Miles' games. This years was a crazy one with 8 different teams in the desert trying to find a rogue professor in some catacombs under a pyramid, all the while battling monsters of all different shapes, sizes, and weirdness! It was really one of the most popular games at the convention and for the first time ever at Miles' table I actually won - granted the rest of the team did most of the heavy lifting, but I exited the board with the objective :)

Loot. Or is it booty? Historicon is always the time of year to find lots of neat stuff to spend money I definitely don't have on. So this years haul - the big one was the brigantine for Blood and Plunder. I have two sloops from the first Kickstarter, but when I saw this being used on the demo table I had to have one. I grabbed four blisters of SAS/LRDG figures from Artizan mostly because they were buy 3 get 1 free, but they are really neat looking figures and will easily work into that pulpy/skirmish type of game I'm all about right now. I found a box of metal Woodland Indians from Warlord in the flea market, as well as a German Marder. I picked up two blisters from Warlord, one that has my two "not" Peggy Carter's in it, and the blister that has the two figures disguised as nuns - both sets are from the new Operation Sea Lion range. I also grabbed some more German armor decals and some more micro drill bits. 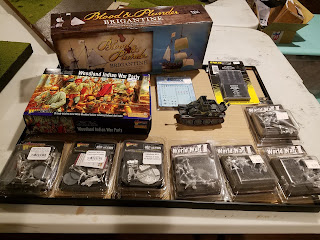 Overall, it felt like there were more people at this year's event than last. Of course I could be completely wrong, but all day Friday, and Saturday morning and afternoon in particular felt really busy. I think the FCC did a really good job this year too - my only complaint is that restroom near the front entrance continues to be an absolute nightmare; and it's primarily used by the ballroom people so it doesn't see nearly the same foot traffic as the restroom in the main hall. For me personally, I will miss Historicon being in Fredericksburg, especially after this year because I met so many new people that I immediately made connections with, I really hope I will see them again at another convention or event.

But... and there always has to be a but with me right?! The thing that will always frustrate me with this last Historicon is the "what could have been" with the table and the game. I got a ton of compliments on the tables, lots of photos were taken, and I got to chat with other terrain specialists who I've followed for years now, and that was absolutely fantastic! But the whole time I knew in my head that it could have been so much more - the lighting effects I had planned, the underground facility itself, as well as it being able to have pulled out from under the manor board, the commando type figures for the game as opposed to civilian attire, being a bit more prepared with Pulp Alley as a rule set, etc. etc. etc. Despite all that, I did think that the games came off really well though, but... I guess that leaves the door wide open for the next convention, right?

Until next time, which should be an Agent Carter AAR, thanks for looking!
Ivor