Peggy Carter, Are You Coming Back?

Just a quick post while I'm still working through the Historicon AAR's of the Agent Carter games; as per usual the farm has been non-stop crazy, barely had enough time to even get the boxes unpacked and the boards set back up after getting home. 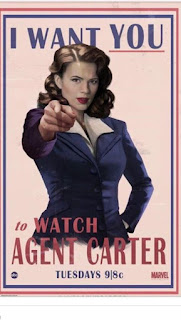 Anyway, you'll remember my jaw kind of hitting the floor a month ago when Warlord announced the new Defenders of the Realm pack for Operation Sea Lion that clearly has two Agent Carters front and center - I was pretty dumbfounded because I'd spent hours and hours of searching the inter webs for proxies for Carter and then, just like that, two are just thrown in my lap by Warlord Games. Well, I grabbed this pack of figures at Historicon and can't wait to get them painted up, especially the uniformed Carter. 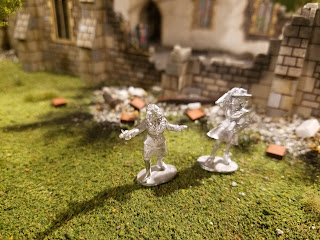 So last weekend I stop by TMP (only to look at the new releases and the marketplace anymore, because honestly TMP is equal to or worse than Facebook these days) and I see Gorgon Studios just released an 'Agent Deering', but again, clearly Agent Carter. Of course purchased. These just showed up yesterday but they are a bit larger than expected even though they are labeled 28mm. We'll see how they stack up against the rest when painted and put on the clear bases.

Just popped by TMP a few minutes ago and Wargames Illustrated is releasing 'Pulp Agent' as the newest figure in their Giants In Miniature line. Yeah, that's definitely Agent Carter. Again, purchased.

Now granted, her head looks too big for her body (fingers crossed it won't be that bad when I get it), and truth be told it's almost identical to my Warm Acre proxy for Carter, but anything Carter-esque is immediately being added to the shopping cart :) Here is the Warm Acre proxy with one of the objectives from the Historicon game. 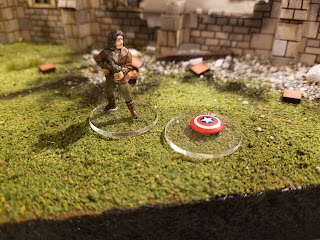 So... what the heck is going on??!! This has been four different Carter figures released by three different manufactures in less than a month?!

Is my beloved British agent making a triumphant comeback to television? Or does she have a stand alone movie coming out? Of course not - I'd definitely know if something like that was happening, lol! But it still really has me scratching my head. Don't get me wrong, any Carter is good Carter, but the show has been cancelled now for almost a year and half, why all the love now?