More Pirates Too? Sure, Why Not

I've somehow managed to get more pirates finished and newly based with the next and final iteration of the quest to find the perfect clear base - more on than later. 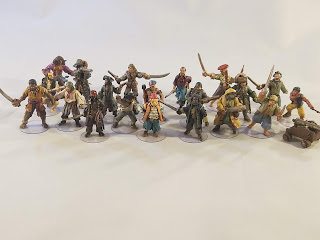 Here is the group of 20, mostly from Northstar - though honestly, I have the hardest time trying to remember manufacturers anymore, mostly because stuff was bought ages ago. 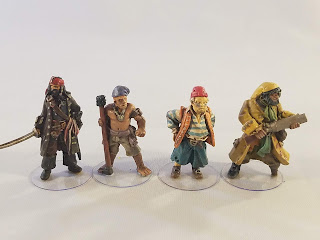 I particularly like this group because it has Captain Jack Sparrow and Smee from Peter Pan. 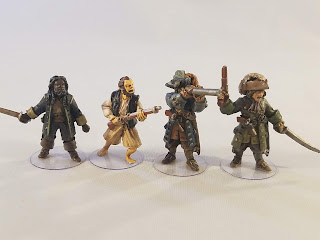 Figures like the one looking through the spyglass are ones I absolutely love - I really like a pose that tells a bit of a story. What's he looking at? A ship in pursuit, or perhaps one he's after. Maybe it's some kind of sea monster on the horizon or perhaps the island with buried treasure on it :) 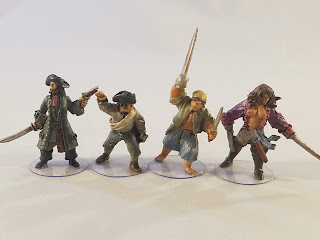 Someone needs to get Ms. Boney an undershirt. 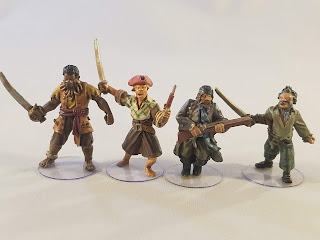 The figure on the left really stands out as he has some manacles on his ankles - again, telling a bit of a story of a recent escape, and that necklace is just boss! 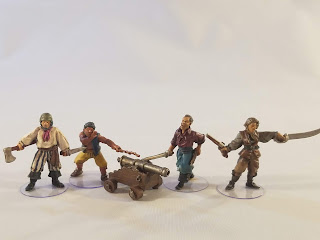 And the final four. The lady on the far right has a bit of a resemblance to Eleanor Guthrie from Black Sails, which is quite neat. 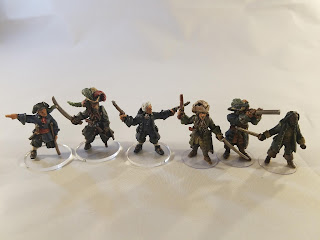 As mentioned above, I'm sure you've noticed the bases on this group is completely different from what I'd been doing clear base wise for the last year and a half. The new bases were created with a circle punch and the plastic is from the packaging from model railroad buildings. 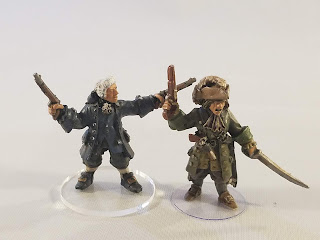 I've now gone to an ultra thin clear base and I think I've finally found the look I've been after since trying the clear base - these new bases equate out to 20mm or 3/4 of an inch. The figure on the left has the 25mm Litko 1.5mm thick base and as you can see the difference is just huge. I initially had hesitations about going to 20mm as I thought they would be too small to handle the figures - I couldn't have been more wrong! 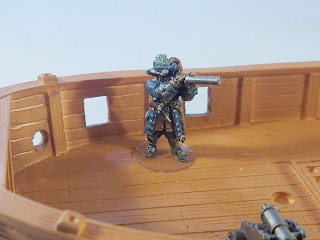 I've read on different forums and threads in the past that those who use clear bases are "lazy" and that's why they use them. The photo above is why I use them and will always use them going forward for skirmish game figures. Traditional basing in this instance would just look odd. With a clear base, no matter where that figure is (on a road, in a building, in a dungeon, on a boat, in the desert, etc. etc. etc.) on the table it's never going to look out of place, like here. 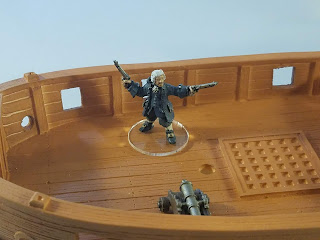 And just as another quick comparison shot, you can see how much better the new base looks compared to the old Litko one. 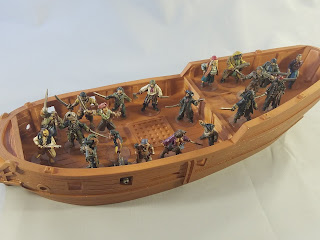 Here is the entire group on my sloop (yet to be finished - apologies lol!) from Blood and Plunder. I could easily get another 8 figures on the boat even with all the cannons added - that's almost 30 figures!!?? And all because of the type of base I'm using. 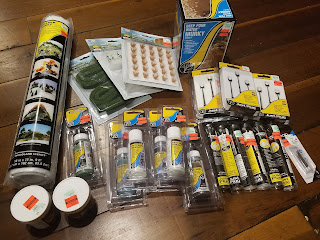 Penny pinching time - I managed to score a whole bunch of clearance hobby stuff. If you have a Hobby Lobby anywhere close to you I highly recommend getting out there as quickly as you can to see what you can pick up.  This lot in the photo I found between two stores - I hit one other one but they were cleaned out. This is a total of 23 items retailing at $269.77 that I got for only $67.77!!?? Madness.

I'd wanted to get this out before Wednesday but wasn't able to so I could wish all those going to Historicon a great time and all the best to those running games as well (Miles, David, Kalissa, Joe). I really wish I could have been there - especially when I found out that 4Ground were going to be at the event for the first time ever!?!? That one was really crushing for me, I would have loved for the guys to have seen the conversions I've done with there kits in person :(

I've got a Kickstarter post coming up as I've had three backings come in over the last several weeks - the Fog Monster from Real Game FX is one of the coolest things ever gotten my hands on for sure!