Quite a while since my last post; I was doing some work on the farm early last week and ended up getting poison ivy really bad. So bad that I actually had to go to the doctors two days ago, something that I clearly should have done late last week! I'll spare you any pictures or details except both my feet and legs, as well as both my hands and arms were a complete mess. These last 10 days have been probably the worst I've ever been through.

I'm currently on steroids for medication, and in addition to wanting to constantly lift weights, watch The Jersey Shore, go tanning, and steal kids lunch money, I actually was able to hold a paint brush today! I've finally got both Liverpool and Manchester City finished to the basic standard, though still lots to do to get them to where I envision them. 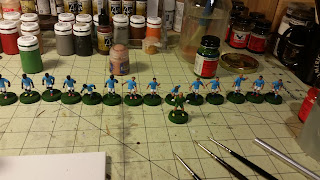 The next step is to attempt to put decals on the fronts of the shirts with the sponsors. I've got Testors decal paper, but I'm still waiting on 2 bottles of Micro Sol setting solution to arrive to help with the decals.  I'm really on the fence about putting numbers on the backs of the shirts as well; players change so much that I can easily see having to repaint figures often (and I've only got 14 field players) and that really isn't very appealing! But I know that they will look 100 times better with names and numbers on them. I guess it's all going to come down to how easily the decal process goes. Stay tuned... 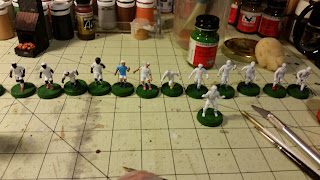 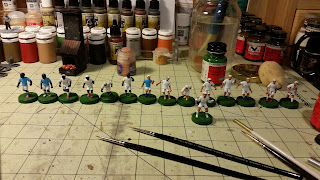 I really wish the figures had the separate head system, I realized after the fact that I didn't have a bald figure for Pablo Zabaleta. Oh, well. 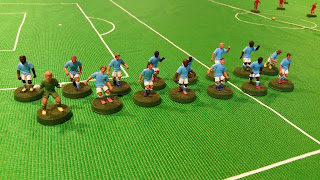 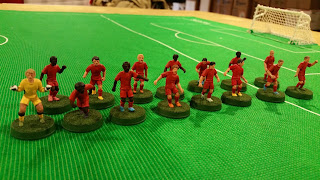 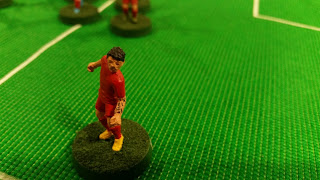 My first attempt at details; I tried to put tattoo markings on Coutinho's arm. All the figures still need their wash and sealed, so maybe that will improve the look; hopefully. 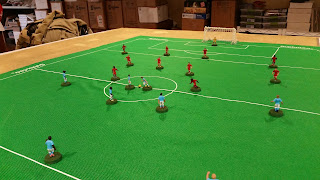 A quick photo of both squads on the pitch. Next up is Arsenal, for my mates Jim and Chad!
As always, thanks for looking!
Posted by Ivor Evans at 8:45 AM