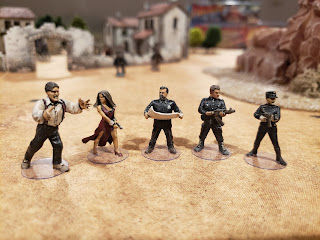 I've been wanting to get this post out for almost four weeks now, but as usual, the farm is just crazy busy and hobby time is at the bare minimum. It's pretty frustrating that no one realizes how I need to get up to the studio on a regular basis to keep my sanity 😃

This batch of James Bond figures are all from Crooked Dice Studios and consist of characters from the movies Moonraker, The Spy Who Loved Me, and Goldeneye. All have the new clear bases. 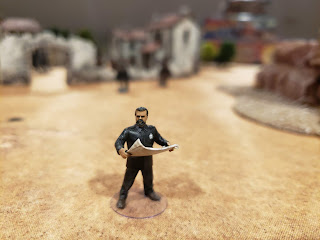 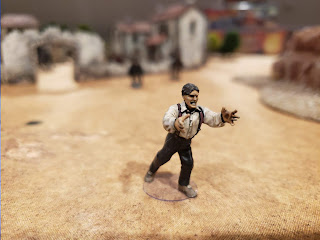 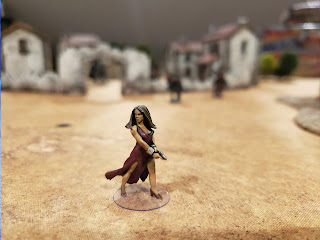 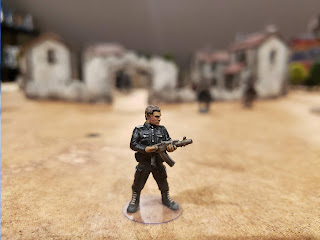 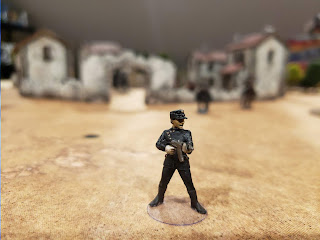 
As busy as I have been with the horses and the farm, the one huge positive that does come from it is it allows me to listen to podcasts all day. There are a ton of really great podcasts out there that focus on the tabletop hobby, but I want to call out one that I think is just heads and shoulders above all of them. 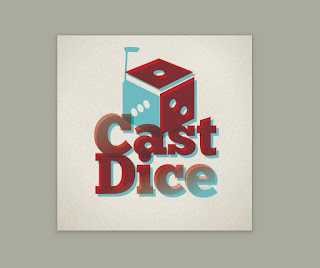 The Cast Dice podcast is hosted by Brad "Old Man Morin". If you are, or were into Bolt Action at any point, and listened to BA podcasts I'm sure you will recognize Brad's name - probably from the LRDG podcast.

He's branched off on his own now with Cast Dice and this is hands down my favorite podcast to listen to. He has a wide range of guests and games that he talks about (and has even started to touch on pop culture stuff which is super exciting) so you're going to get a little bit of everything that's currently out, which is great for someone like me who can't stay focused on any one project and always gets sucked into the newest shiny game that gets released.

What really strikes me about Brad is that you can really tell by the way he talks that he has an absolutely incredible passion for gaming - and it's all aspects. Rules, figures, terrain, developers, current trends, etc.  And I love his interview style - it's extremely professional and he really tries to make it balanced between himself and his guest, and you will often hear him say "I've been talking too much, what are your thoughts". He interacts with his guests really well and you can tell he genuinely listens to them talk by the questions he asks. I know that I'll probably never meet him, but spending several hours a week listening to him, I feel like we're cut from the same cloth and could easily be friends - so a big thanks Brad! 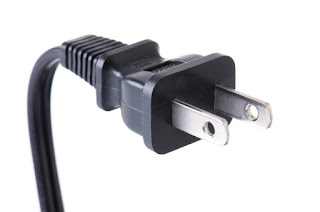 I also wanted to put out a quick plug for two of  Brad's more recent podcasts. The first features Simon Quinton, from Brummie's Wargaming Blog fame. I'm sure most of you already know Simon, but he does some absolutely incredible work over on his blog that you should definitely check out.  He and Brad talk all about Crooked Dice's 7TV rules set in Cast Dice episode #42 and it's great stuff! The second one features Jayson over at the Doctor Merkury blog. Jayson is doing some brilliant tabletop stuff with classic G.I.Joe from the 80's (and I blame him for making me seek out those original comics I sold years ago again - thankfully I found them in collections at my local library and have placed a hold on the first one), and he and Brad talk quite a bit about that along with some other cool stuff in Cast Dice episode #35. Highly recommended. And now on to part duex of the podcasts. As I mentioned above, Brad has started to touch on pop culture with his podcast, and last month Cast Dice talked about the classic James Bond film 'Never Say Never Again' - episode #40. Brad's guest for that show was Jarrod Alberich, known as the Yard Sale Artist, and it was an absolute blast to listen to Brad and Jarrod talk through the entire movie. 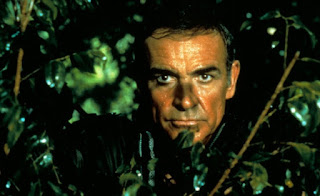 One sequence I always loved from that movie was the opening. And to me it really felt like it could easily be a great little tabletop game; one agent alone to infiltrate the compound (and it was an awesome location that could make for a brilliant model) and free the hostage. But as the guys discuss, the music in this movie is just horrendous. I mean it could easily  be used at a poison control center to help induce vomiting. Anyway, I stumbled on this fantastic re-cut of that opening sequence with classic Bond music and a whole new title sequence - so this ones for you Brad! Never Say Never Again Classic Bond 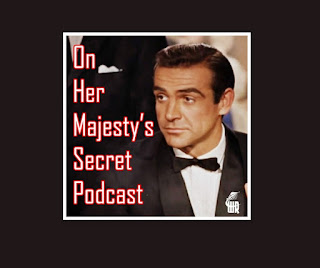 I love my spy-fi stuff as followers of the blog will know, so when I found out Jarrod has his own podcast called "MI:6 Rookie Agents" that talk about ALL the Bond movies I was super excited. The "MI:6 Rookie Agents" podcast falls under the "OHMSP" (the photo above - there are several other podcasts that I highly recommend that also fall under the OHMSP heading all talking about Bond as well) where he and his brother Jason take two of Jarrod's friend's who are not familiar with the Bond franchise, through the entire series one movie at a time. It's both really fun and interesting to get what is essentially a "newbies" perspective on the franchise, along with Jarrod and Jason's expertise - and let me tell you, Jason is a Bond encyclopedia! The production value of this podcast is top notch and a whole lot of fun to listen to, highly recommended for any Bond fan.

*I listen through Podcast Player on my phone, but you can also find both on Podbean and iTunes as well* 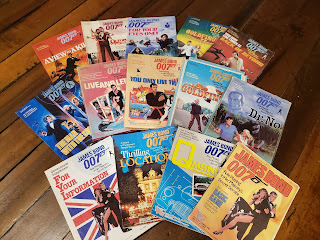 But my real hope is that Jarrod and Jason will do a podcast dedicated to Victory Games amazing James Bond role playing game - this is my collection. I have everything except one adventure and two of the supplements. I've heard them speak briefly about the game on their podcast and that it was one of their favorites when they were kids. This was one of those games I was absolutely obsessed with as a kid too - and it really was the game that got me building models and terrain specifically for the tabletop and specific encounters. So fingers crossed that they will do something in the future as I'd love to hear about their thoughts and experiences with the game. 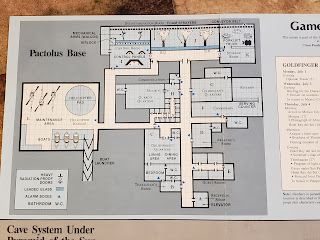 What was really great about each individual adventure was the amazingly detailed maps that they came with. One of my very first large scale terrain pieces was Auric Enterprises from the Goldfinger adventure. I remember scaling up the map of the facility so it could work with my N Scale cars and figures I had from my model trains. I really wish I had a photo of the model! I do remember my step-father not being too pleased with me that I cut up an extra window screen to make my fencing for the facility though lol 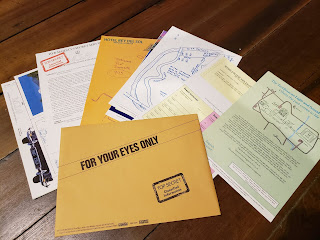 They also came with these boss envelopes that said "For Your Eyes Only" that would hold props for the mission - like briefings, letters, maps, transmissions, etc. Anything that could be used as clues that the gamemaster could hand the players to help them complete their mission. Great stuff! 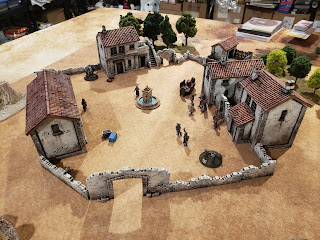 I know last time I mentioned I was continuing on with my Jonny Quest project, well, as usual I got sidetracked. This time with a new Zorro project. Here's a quick peak at the table. 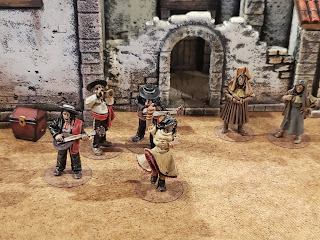 I think it was the mariachi band that made me lose focus on the Quest gang - who doesn't want a mariachi band on the tabletop??!! And with a dancer no less. 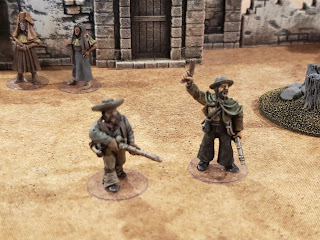 And a couple of amigos. I still need to go back and rebase all my Zorro figures from earlier this year to these new thin clear bases though. 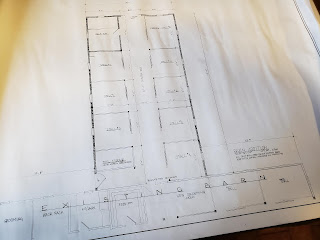 Now for winter farm projects... how mad is it that we are actually building an extension onto the barn!? That means another 8 stalls added to the existing 6. I guess I need to think positive and realize job security.

Lastly, I managed to get a couple more followers of the blog (I am all of one away from fifty lol) - I'd like to thank Steve Hamner and Doctor Merkury (Jayson) for following along, very much appreciated guys!

Until next time,
Thanks for looking!