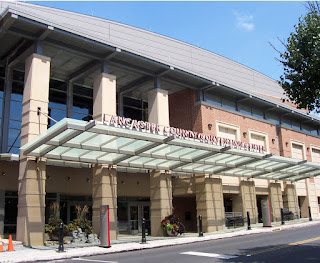 So I've made it Lancaster for this years Historicon convention. 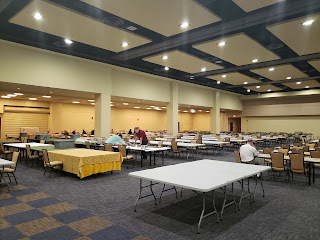 Registration was an absolute breeze, taking all of about 30 seconds - and 15 of that was adjusting the brightness on my phone so the scanner could pick up my email code, a big hats off to the HMGS crew with regards to registration 😀 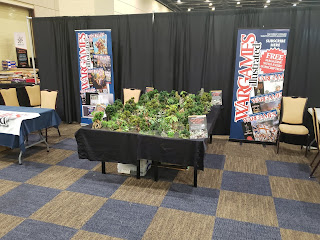 The vendor section of the convention looks like it's going to be devastating to the finances. 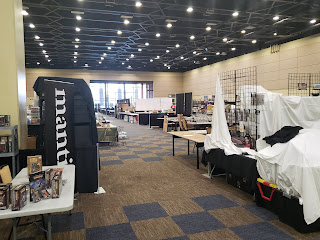 Mantic are here, so I'm hoping that some of those TWD exclusives will be available 😃 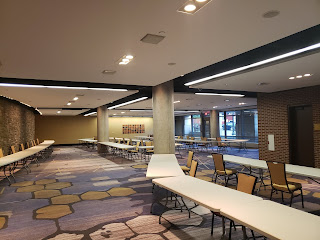 This section is at the lowest part of the center and where Wally's Basement will be set up - WB is the formal name for the flea market.  This is always a great place to find some bargains and it'll be interesting to see how it goes tomorrow as it is open from 9pm to midnight. 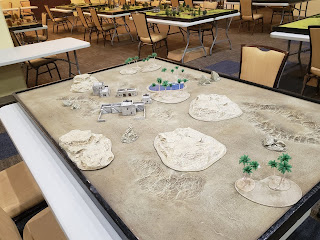 Not a lot happening in the gaming rooms which I was kind of surprised at. I would have thought more GM's would be setting up ahead of time. 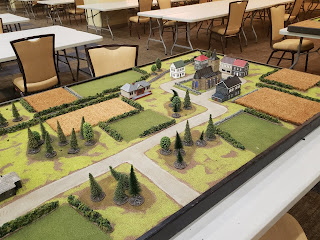 The Flames of War tournament tables were all out in full force though. 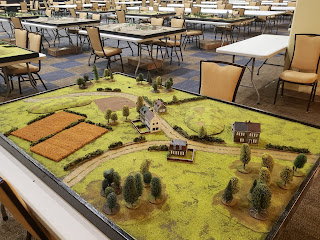 Even though I have a huge box of FOW miniatures and terrain, I never really got into the game. 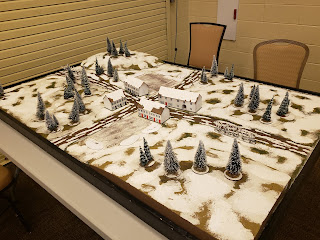 I enjoyed their models much more than the rules for the game. 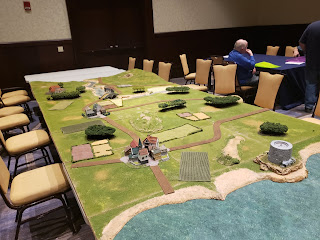 I did bump into super GM, and winner of countless awards for his games, Miles Reidy. This is his table he was in the early stages of setting up for his monster 15mm Napoleonics game " To Catch A King". It was great to see him again and can't wait to get some more photos of the table tomorrow when he's got everything set up! 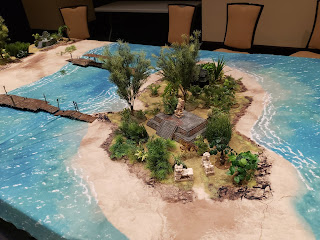 This was fantastic looking little table that really feels like there should be lots of pirates battling it out on it. 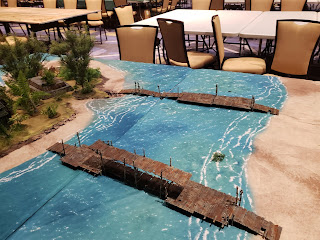 It could also double for a pulpy adventure too, so who knows, but I'll definitely have to try to figure out exactly what it is. 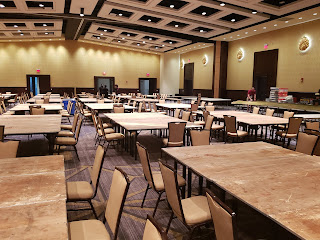 So a couple of quick thoughts on the convention center. The pluses - the facility absolutely looks the business! Lots of open space, lots of lighting, and the carpeting is thick and easy on the feet. The escalators are nice too. The new HMGS board members really seem to have things going in a positive direction 😀

The minuses - I think that the bathroom situation may turn into an issue. Time will tell, but I've got a feeling that it's going to be much like the Fredericksburg Historicon of 2016, yuck. I also think the parking is going to be a bit of an issue, and hopefully the validation that HMGS will be doing isn't a once per day thing. First, I always liked (at past conventions) being able to take purchases out to my car instead of lugging them around with me. Second, and most importantly, a mid-day break is essential for these conventions - gaming goes from 9am to 1am. My hotel is off site so I can see me going back and forth to my room at least twice a day. Again, time will tell, and tomorrow I think I'll have a better idea of these how these two questions will play out.

As always, thanks for looking!
Ivor
Posted by Ivor Evans at 7:51 PM