I made a few more smaller purchases over the last couple of days - it could have been much worse believe me (well, actually it was as you'll soon see). I picked up some more casualty markers from Knuckleduster. A diecast Aston Martin DB5 for Spy-Fi/James Bond. A handful of pack horses from a guy who just had boxes upon boxes of Foundry figures at the flea market. Some sandbag emplacements. I got the Wargames Illustrated excluse T.E. Lawrence on a motorcycle with the subscription renewal, but the item I'm most excited about is the Green Stuff World rollers I grabbed. I've heard nothing but great things about them when used with XPS foam... 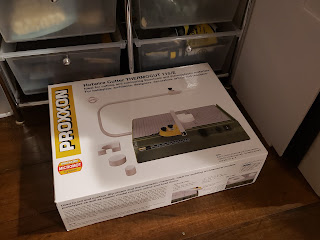 Which means I think this will finally get me motivated to start playing about with my Proxxon foam cutter that's sat unopened for like a year now (found it online for only $80 shipped so I jumped on the deal). 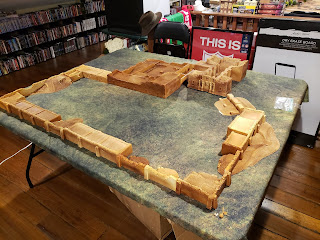 But as I mentioned in my earlier Historicon posts, there is always one game that hits me right in the feels and makes that little voice inside my head go "yeah Ivor, let's do that at home". Well this year it was the Alamo. Yes, I totally impulse bought the Alamo (damn you Jay lol!) in 28mm scale. It's an absolute monster taking up the entire 6x4 table you see.

And like every other Historicon in the past I've impulse bought a new project (28mm ACW from my first convention, the hundreds of dollars spent at Old Glory on old west buildings and figures year  two, the Islawanda/Rorke's Drift box sets from Warlord year three... you see where I'm going here) after I bought the Alamo itself I immediately went into a "what have I done" moment like young Skywalker here. The amount of figures needed for this project is literally making my stomach hurt lol! Oh well, if nothing else I've got a boss fort to have some old west battles in and around.

Final thoughts on the convention - absolutely loved it. It was great to see both Miles Reidy and Joe Procopio again, so glad we got the chance to sit and chat a bit guys! I also got to catch up with super terrain maker David Sibicki and his wife Kalissa - who won an award for her game Friday morning, congrats! - as well as meeting up with Beau and Chris. I was finally able to make it to the Hobby University and learned a lot of really neat things - I will 100% be doing more of these classes at future conventions. But I think my biggest highlight of the event was being able to see the absolute joy on Forrest Harris' face as he watched six of us play the game he created in the Commonwealth Hall, Gunfighter's Ball. I had seen Forrest in the dealers hall demoing the game and was able to just say "hello" and that I backed his Kickstarter, just love the figures and what he's doing with the old west genre. He was extremely thankful for the support. It put a smile on my face as I watched him from the other end of the table just watching and listening - he looked like a child on Christmas morning 😀 I could really tell he absolutely loved seeing people play the game that he created. Cheers Forrest!

So now to the dilemma of Historicon 2020, as I really really want to build and create a new game table to showcase, and I've got a lot of really great ideas that could be pretty fun. First and foremost though I feel I'd need a co-pilot. My voice is WAY too quiet to even attempt to be explaining rules or the like - I've done it several times in the past at the Fredericksburg location and shouting just isn't my thing. So I'm thinking I'd need someone to partner up with me to be the "voice" in a way. Second problem, and what I think will ultimately make this nigh impossible is that the family we work for has bought a new farm in South Carolina, so I will now be spending six months of the year down south with the horses - in the past I would always stay up north as the wife and horses took the annual trip south, which allowed me time to hobby almost exclusively. The photo above shows just how big the new farm is - clocking in at a whopping 375 acres.

Thankfully we only have 9 horses right now, but I still feel like I'm going to be pretty busy and more importantly, how do I possibly bring everything I need to build and create a new game from the studio here at the farm in Ohio, all the way down to South Carolina? And I really don't want to have to buy stuff all over again. So as usual, nothing is simple and now I have all kinds of logistics to figure out if I'm going to attempt a table for H-con 2020...

A couple of random notes of craziness to end this post. First, I don't particularly like Facebook but nonetheless am on it for following gaming/hobby pages. I follow the Mantic page for The Walking Dead miniatures game and a while back Mantic guru himself Ronnie Renton posted that he was looking for photos to go in the rule book for the new expansion called 'March To War'. Just for fun I posted up one of my old staged photos on a warehouse platform and low and behold while I was at Historicon I got a notification that Ronnie had commented on my photo - how cool was that! 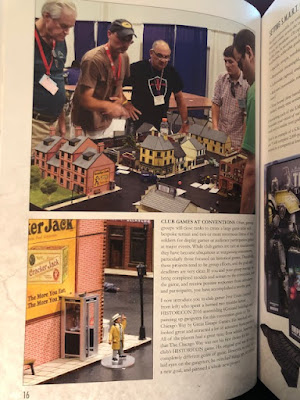 And finally the big one that came as total surprise was I got an email from my friend Joe Procopio saying that I was in Dave Taylor's new book 'Armies, Legions, and Hordes'. I had absolutely no idea that I was going to be in it or I'd definitely would have backed the Kickstarter lol! Dave has been brilliant in regards to putting my work out to the masses - he's gotten me in Wargames Illustrated several times (one being a pretty big article which itself was just mad) so to now be in an actual published book is even madder. Thanks Dave!
*though looking at these photos this was like three years ago and those building need shingles, those old Litko clear bases have since gone the way of the garbage can, that phonebooth is not period correct, and just generally I think I'm much better at table creation nowadays lol! artists, always their worst critics*

I also want to welcome new follower Martin Thorton to the blog! Appreciate you following along.

Until next time, thanks for looking!
Ivor
Posted by Ivor Evans at 9:51 AM